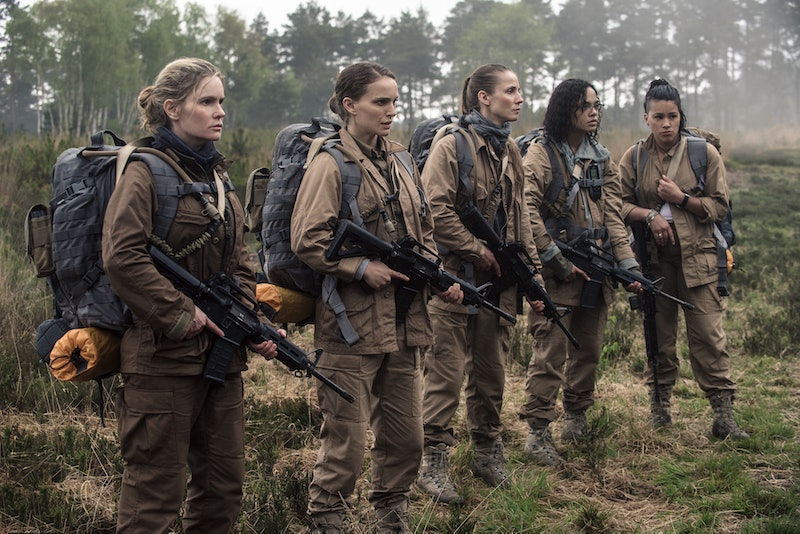 Sometimes it feels like pulling teeth to get Hollywood to cast more women in films where they're not just the wife or girlfriend of the leading man. Some of the best female-led films in recent years have come about because an A-list female actor read a script she liked with a male lead, and asked, "Why can't this be played by a woman?" Thankfully, the filmmakers behind the new sci-fi thriller, Annihilation, didn't have to flip any character's gender to make it more feminist, as the book on which the movie is based is already centered on five women. But Annihilation isn't just a notable film for featuring five female leads — it manages to star five women without making even the slightest deal about it.

Directed by Alex Garland, Annihilation, out now, stars Natalie Portman as a biologist named Lena who ventures into an area called "The Shimmer," a Floridian swampland afflicted by an unexplained alien phenomenon that keeps expanding day by day. She's joined by Jennifer Jason Leigh as Dr. Ventress, a psychologist and the leader of the mission, as well as a physicist (Tessa Thompson), an EMT (Gina Rodriguez), and an anthropologist (Tuva Novotny). Once inside the shimmer, the group begins to experience events that one can only describe as psychedelic, mysterious, and inexplicable.

Not only are the movie's women some of the most intelligent, strong, and competent ladies sci-fi films have ever seen, but they're also all very different in personality and engaging as characters. But one thing that's never given some artificial weighty symbolism in the entire film is the fact that this entire expedition team is made up of women. There's one single moment, when Dr. Ventress is assembling the team, where Lena remarks that it's made up of "all women," but that's literally the first and last time their gender is even mentioned. There's no conversation about, "We're trying all women this time because..." or any remark about their femininity, female nature, or gender whatsoever. Their being women is just a matter of fact. It's this insignificance that makes the movie significant.

Annihilation is incredibly weird, bone-chillingly scary, highly intellectual, and one of the best science fiction movies of this generation. And it gets to be revolutionary, too, both for its focus on five women (two of whom are women of color), and that it does so without making a fuss out of their gender. In that way, Annihilation is essentially doubling down on its gender equality. And though Garland didn't have to make any changes to the source material, it sounds like he was aware that Annihilation's cast was going to be something people would be talking about.

"I've watched a lot of sci-fi movies, so I’m aware of sci-fi clichés in presentation of men or women," the director said in the film's press notes. "I was just trying to make sure that there were five characters who were appropriate to the themes in the story, and all of them were people in their own right. I was more worried about making sure they were dimensionalized in that respect than anything else."

Portman also noted that working on Annihilation felt unlike many of her other projects. "It's such a different environment when you’re not the girl in the movie," she said in the press notes. "It's nice to feel that you're a character reacting to other characters, not a representative for your entire gender."

If the actors within the film are feeling the effects of more gender inclusion, than the audience will certainly take notice as well. It's one thing to cast more women in films, and to demand that more movies focus on female characters, but not everything that features women has to be about them being women. We need to see women just being human, and that's why Annihilation feels so different.

The film is part of a recent wave of great sci-fi movies that feature compelling women at their centers. Under the Skin, Arrival, the recent Star Wars films, and Garland's own Ex Machina have all told exciting stories from female perspectives or about female characters. Annihilation bumps that up a notch, nay five notches, with a sixth thrown in for just making it no big thing.

More like this
Amanda Seyfried Says She Felt Pressured To Shoot Nude Scenes At 19 Years Old
By Jake Viswanath
Someone Must Pay For What Happens To Bad Bunny In 'Bullet Train'
By Arya Roshanian
The Sean Bean Intimacy Coordinator Controversy, Explained
By Sam Ramsden
Gassed Up Promises All Things Action, Risk, & Redemption
By Frances Stewart
Get Even More From Bustle — Sign Up For The Newsletter