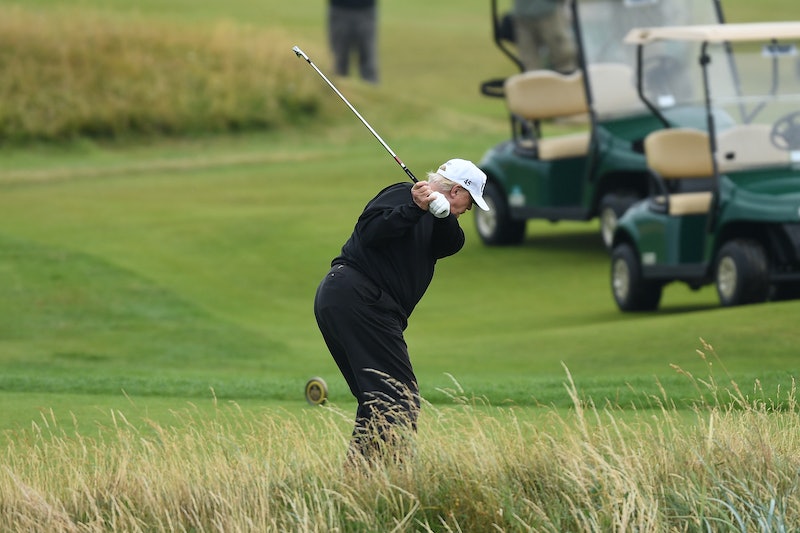 In the midst of the government shutdown and the president's push for wall funding, one of the Trump golf courses fired immigrants working without work papers, their lawyer told The Washington Post. Some of the workers were highly trusted by members of the Trump family and had been employed for years, the paper reported. Bustle has reached out to the Trump Organization and the White House for comment.

According to the workers — numbering about 12 — they were called one at a time to speak with a Trump Organization executive from headquarters to be fired on Jan. 18. The group had worked for years at Trump National Golf Club in Westchester County, New York, and had reportedly won employee-of-the month awards. One even says they kept keys to the weekend home of Eric Trump, the president's son.

Each were told that their hiring documents were audited and found not to be valid, despite having used them for years without issue. "Unfortunately, this means the club must end its employment relationship with you today," the executive reportedly said, according to a recording made available to The Post.

Eric Trump wrote an emailed statement to the paper. "We are making a broad effort to identify any employee who has given false and fraudulent documents to unlawfully gain employment. Where identified, any individual will be terminated immediately," Trump wrote in the statement.

The attorney who publicized the firings to The Post, Anibal Romero, is also representing former Trump workers at another club in New Jersey who were let go in 2018. The New York Times reported in December that there were immigrant workers at the Trump National Golf Club in Bedminster working without a work permit or other legal status.

Romero called for an investigation into whether the golf clubs had exploited undocumented workers. The Trump Organization showed "a pattern and practice of hiring undocumented immigrants, not only in New Jersey, but also in New York," Romero told The Post. "We are demanding a full and thorough investigation from federal authorities."

Whether or not the Trump family or top executives were aware of the immigration status is unclear, but reports in The Times and The Post allege that supervisors at the clubs did and helped shield the workers. Romero, though, said that the lesser pay and benefits paid to workers without papers would suggest that many in the Trump Organization knew. "I’m not buying that they didn’t know," he told The Times.

President Trump has been arguing since the 2016 election that there should be a border wall to prevent migrants from entering the country from Mexico. Most of the workers fired from his New York club were Mexican — the few that weren't were Latin American — and most had also entered via the Mexican border, according to The Post.

When the D.C. Trump hotel opened during the campaign, Trump said, "We didn’t have one illegal immigrant on the job." He claimed to have used the E-Verify system to check the workers' paperwork. Now, The Post reports that the Trump golf club does not appear on the list of companies that use the system.

Trump first made clear his view on the matter to workers at the Westchester County club when he gave a speech there during the campaign in June 2016. "On immigration policy, ‘America First’ means protecting the jobs, wages and security of American workers, whether first or 10th generation," Trump said in the speech, according to The Post. "No matter who you are, we’re going to protect your job because, let me tell you, our jobs are being stripped from our country like we’re babies."

Now, more than two years later, the workers who heard that anti-immigrant rhetoric from the top boss are out of a job.