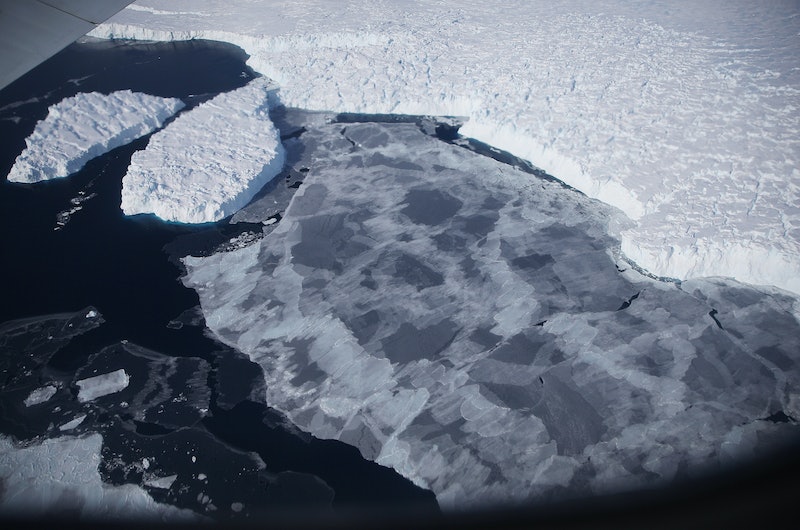 While efforts to better understand climate change, and what we can all do about it, remain an ongoing development on the part of nations and researchers worldwide, science continually shows us that these concerns are real — and if we want to create lasting change for the better, facing where we stand environmentally, and taking immediate action, is crucial. A new study published in Nature states that Antarctica, the southernmost polar region in the world, has lost up to three trillion tons of ice since 1992, and it’s possible that the rate of ice loss is accelerating — causing a potentially significant rise in sea levels.

While this news might conjure scary thoughts of post-apocalyptic summer blockbuster nightmares, researchers say that though there is major cause for concern, we still have time to act. According to the Washington Post, persistently high global carbon emissions could result in more rapid melting and continually rising sea levels, which is especially concerning for coastal towns and communities worldwide. But if nations stand firm to reduce these emissions via recommendations in the Paris Climate Agreement, those efforts could go a long way in slowing down future damage.

According to the study’s abstract, the Antarctic Ice Sheet acts as a sort of environmental marker of climate change, giving researchers a read on the rate of global climate change and how fast sea levels are rising. Satellite observations of the ice sheet’s activity over time, “its changing volume, flow, and gravitational attraction,” show that the ice sheet lost over three trillion tons of ice from 1992 to 2017. NASA researcher Isabella Velicogna, from the University of California, Irvine, told ScienceAlert that “The data from these spacecraft show us not only that a problem exists but that it is growing in severity with each passing year.”

NPR reports that before 2010, Antarctica didn’t seem to be contributing much to ice loss that cause sea levels to rise worldwide, but now, it’s clear that ice loss in the region is significant. Study co-author Andrew Shepherd of the University of Leeds told NPR that “Since around 2010, 2012, we can see that there’s been a sharp increase in the rate of ice loss in Antarctica.” Shepherd also told NPR that the ice sheet is now losing three times as much ice as it was in years past, and that annual rate of rising sea levels due to warming in Antarctica is now tripled. NPR states that the ice loss is due to warming oceans resulting from climate change.

According to ScienceAlert, this research is part of a collection of five studies tracking environmental changes in Antarctica and the Southern Ocean, and is the collective effort of over 80 scientists across the globe, who determined that most of the ice loss measured is occurring via rapid melting in West Antarctica, specifically. ScienceAlert also reported that the Antarctic Peninsula’s ice shelf collapse is another main reason that sea levels are rising. Researchers estimate that, if left unchecked over the next half century or so, the Antarctic ice sheet melting down could account for a 33 foot rise in sea levels in the coming years.

While this news may seem upsetting and grim, scientists stress that it’s not too late to change course of climate change and reverse these potentially disastrous outcomes — there is still a lot we can do. By reducing emissions via the Paris Climate Agreement recommendations over the next ten years, significant improvements can still be made. Australian climate scientist Steve Rintoul told ScienceAlert that a low emissions future is still totally possible: “If society decides to follow the low emissions scenario, then emissions need to decrease by about 50 percent each decade from now,” in order to have the most positive impact. Rintoul also stressed that strategies to reduce emissions, like renewable energy options, have never been more available. “A key message of our paper is that it is not too late to change track and choose a lower emissions future.”