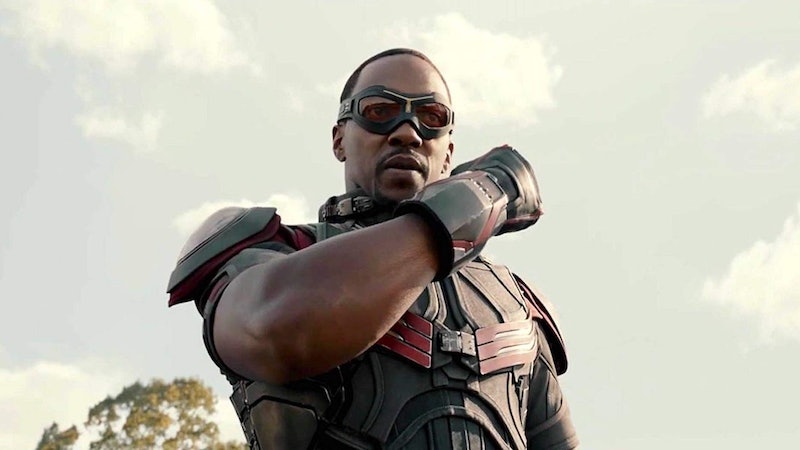 In a conversation that touched on the current racial moment, Anthony Mackie addressed the whiteness of Marvel films. For Variety’s Actors on Actors series published on June 28, Mackie spoke to Hamilton alum Daveed Diggs about his upcoming role in the Disney+ series The Falcon and the Winter Soldier. When the topic turned to the Black Lives Matter movement, Mackie reflected on Hollywood’s lackluster history of inclusivity and the overall whiteness on set of the various Marvel films he’s starred in.

“It really bothered me that I’ve done seven Marvel movies where every producer, every director, every stunt person, every costume designer, every PA, every single person has been white,” Mackie said. He then turned attention to Ryan Coogler’s 2018 Marvel film Black Panther — and questioned why Black production crews are only called on for Black films. “We’ve had one Black producer; his name was Nate Moore. He produced Black Panther,” Mackie said. “But then when you do Black Panther, you have a Black director, Black producer… a Black costume designer, [and] a Black stunt choreographer.”

He continued, “And I’m like, that’s more racist than anything else; because if you only can hire the Black people for the Black movie, are you saying they’re not good enough when you have a mostly white cast?”

Mackie also addressed the hiring practices that should be implemented. “My big push with Marvel is hire the best person for the job,” he said. “Even if it means we’re going to get the best two women, we’re going to get the best two men… Because it starts to build a new generation of people who can put something on their résumé to get them other jobs… And that’s something as leading men that we can go in and push for.”

Mackie starred as Sam Wilson, also known as Falcon, in several Marvel films like Captain America: The Winter Soldier, Captain America: Civil War, and Avengers: Endgame. He’ll reprise his role once again opposite Sebastian Stan’s Winter Soldier for Disney+’s The Falcon and the Winter Soldier, which paused production in March due to COVID-19. Originally slated to debut this fall, the series will pick up after the events of Endgame, which saw Mackie’s Falcon inheriting Captain America’s (Chris Evans) iconic shield. Stan teased the aftermath of this in an interview with The Hollywood Reporter in April and said, “Sam, to me, was always the clear man to take on that mantle for numerous reasons, which also comes with so much more baggage that’s going to be explored in the show."

While Falcon’s newfound reign as holder of Cap’s shield in Falcon and the Winter Soldier will no doubt be exciting, it would be in the best interest of Marvel to join Mackie in examining the overall whiteness of its films, too.

More like this
Everything You Need To Know About The 'Knives Out' Sequel
By Grace Wehniainen
Chris Hemsworth Joked That Baring His Butt In ‘Thor: Love And Thunder’ Was A “Dream”
By Brad Witter
The 'Hocus Pocus' Sequel Finally Has A Release Date & It Makes Total Sense
By Shannon Barbour and Radhika Menon
Everything To Know About 'The Hunger Games' Prequel Movie
By Grace Wehniainen and Radhika Menon
Get Even More From Bustle — Sign Up For The Newsletter