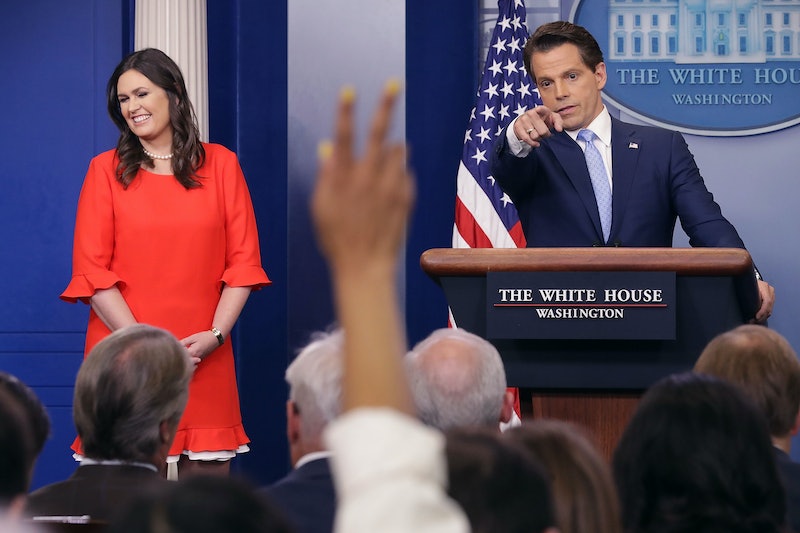 President Trump's new White House communications director, Anthony Scaramucci, only had one comment for his press secretary's performance in the White House briefing room — but it didn't have to do with how she handled the day's news or questions from the media. Rather, Scaramucci seemed to give Sarah Huckabee Sanders appearance advice. During a televised interview with CNN on Sunday morning, Scaramucci said he'd "like to continue to use the hair and makeup person."

Scaramucci tweeted Sunday that he was not referring to Huckabee Sanders using the hair and makeup person, but talking about himself. "For the record, I was referring to my hair and make up and the fact that I like the make up artist. I need all the help I can get! #humor"

Scaramucci seems poised to bring a new attitude to the Trump administration's communications team. Speaking to Tapper, he shared his vision for his job and the communications office moving forward. "Let’s soften up our relationship with the press," he said. "They’re tough on us, but let’s be tough on them."

The Trump administration's relationship with the media has probably never been described as "soft." The president has taken several jabs at the mainstream media, including a Fourth of July message that said, "I am president, and they're not," about the media. Last month, Huckabee Sanders had a heated exchange with a reporter in the White House briefing room after she called the media "fake news."

If Scaramucci is serious about pursuing a softer relationship with the media, then his approach to the communications team may be well-received. What won't be well-received, though, are comments about his female colleagues' appearances.

If he was truly talking about himself, that's one thing, but since the president has made a habit out of calling attention to women's bodies — most recently admiring the French first lady's "good shape" — Scaramucci is in the perfect position to set a different example.