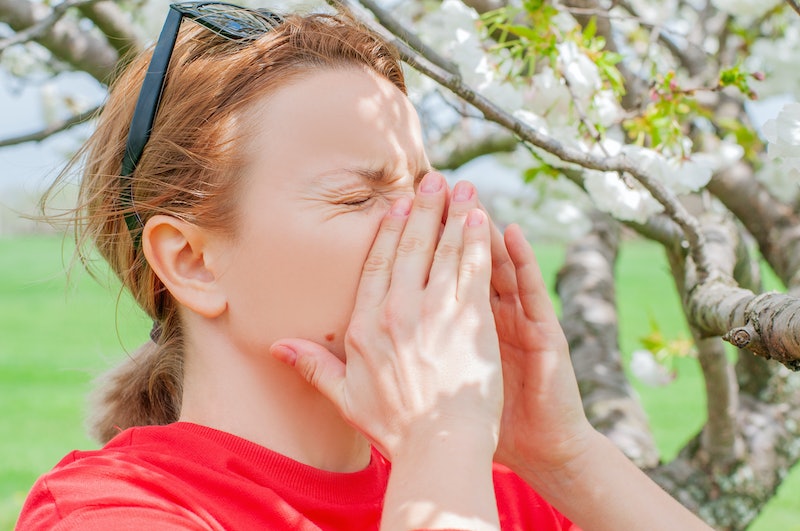 Dmytro Flisak/Shutterstock
By Emily Dixon
May 12, 2019

Summer is coming, and along with it, its malicious sibling: hay fever season, which might see you stocking up on antihistamines. Some side effects of the allergy relief medications are well known, like drowsiness (particularly with older antihistamines, the NHS points out) or nausea. But there's other side effects you might be less aware of: for instance, antihistamines could be causing your vaginal dryness, as Metro reports.

As Metro explains, antihistamines work by blocking histamine, the chemical your body produces when exposed to an allergy trigger. In doing so, they can dry out your mucous membranes — including that within your vagina. Speaking to Health.com, gynaecologist Dr. Alyssa Dweck explained, "Antihistamines can cause the blood vessels to constrict, so there’s less blood flow and therefore less secretions throughout the body." Hence the vaginal dryness, which, according to the NHS, you might also experience as itchiness or soreness "in and around your vagina," or an increased need to urinate, recurrent UTIs, or discomfort or pain during penetrative sex.

There are, of course, a range of other potential causes for your vaginal dryness: it could be due to hormone changes, according to the NHS, or other medications like the pill or antidepressants. An underlying health condition could be to blame, or you might not be sufficiently aroused during sex.

It could also be down to the products you're using: Dr. Vanessa MacKay, a consultant obstetrician and gynaecologist and spokesperson for the Royal College of Obstetricians and Gynaecologists, told Metro, "Women should not use any perfumed soaps, washes or douches in or around their vagina and should also steer clear of moisturisers that aren’t specifically for the vagina." It's worth checking with your GP if you're concerned.

If you do suspect antihistamines are the culprit, panic not: you don't have to choose between debilitating hay fever and vaginal dryness. Firstly, you might look to alternate hay fever remedies that don't involve antihistamines. Decongestants can help to relieve hay fever symptoms, the NHS says; they're available in various forms, like nasal sprays, tablets, and soluble powders, though many also contain antihistamines. (Double check with your doctor or pharmacist if you're on other medications, the NHS warns: taking decongestants alongside antidepressants, for instance, can cause your blood pressure to spike.) Your GP might also prescribe steroids or immunotherapy if over the counter solutions don't help.

You could also try minimising your exposure to pollen, the NHS says: stay indoors when the pollen count is high, for instance, and take a shower and change clothes after you've been outdoors. Vacuum frequently, ideally with a HEPA filter, and consider installing pollen filters in your car's air vents. Applying Vaseline or something similar around your nostrils can trap pollen before you inhale it.

Alternatively, if antihistamines are a summer lifeline that you're unwilling to relinquish, you could try a vaginal moisturiser to relieve the discomfort of dryness, the NHS says. And if you're having penetrative sex, don't hesitate with the lube. Worry not, sniffly friends: hay faver needn't stifle your fun this summer.