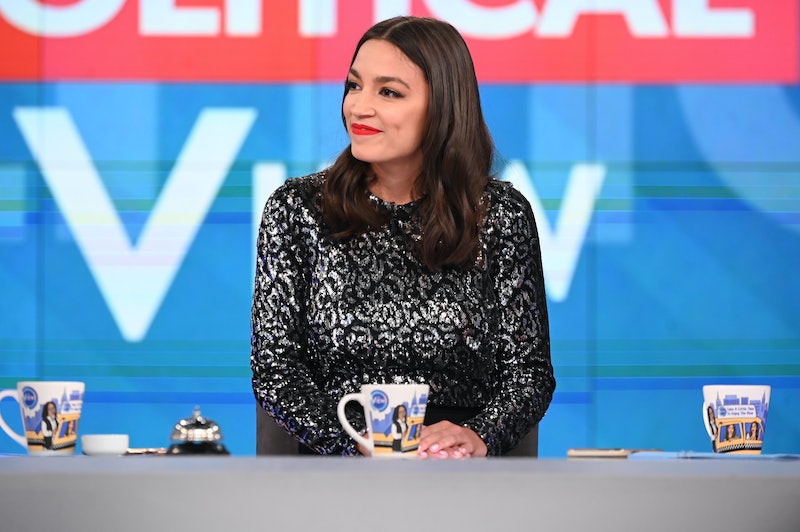 Who said Congresswomen can’t wear sequins? On Wednesday, Feb. 19, Representative Alexandria Ocasio-Cortez was a guest on The View, where she stepped out in a sequined leopard-print sheath dress by Rickie Freeman. While she dazzled in the glittering number, some critics found it offensive. They suggested that Ocasio-Cortez — who champions progressive, Democratic Socialist policies — shouldn't be wearing designer clothing because of her political ideologies.

In true AOC form, the Congresswoman shut down her naysayers in a tweet over the weekend, in which she revealed that she doesn’t always purchase her luxury items. “I rent, borrow, and thrift my clothes,” she said. “It’s also environmentally sustainable!”

She specifically called out The New York Post, which published a story about her apparel choices for her appearance on The View.

“The Post is just mad that you can look good fighting for working families,” Ocasio-Cortez added. “Sequins are a great accessory to universal healthcare, don’t you agree?”

Ocasio-Cortez’s appearance and spending habits have been under intense scrutiny ever since she became the youngest woman to be elected to Congress in November 2018. Last fall, the conservative newspaper The Washington Times touted a story about AOC’s hair salon of choice in D.C. The headline? “Self-declared socialist AOC splurges on high-dollar hairdo.”

As The Washington Post noted, the media's fixation on AOC's fashion and beauty choices is emblematic of a wider problem. Women in public office are unfairly scrutinized for their style, with media outlets either calling them out for splurging or judging them for not adhering to societal beauty standards. For example, in one of her first public appearances after the 2016 election, Hillary Clinton opted to not wear makeup, which garnered harsh commentary from all corners of the internet.

In both Clinton and Ocasio-Cortez's cases, supporters spoke out in defense of their style choices. "How many articles about tailor-made suits and Rolex watches of cis male politicians do they write about, one might ask?," one user tweeted to AOC. Another wrote, "If you wear a sequin dress when you are inaugurated as president, we would stan."

AOC's now-infamous sequin dress is currently available — and on sale — in select sizes over at Saks Fifth Avenue.