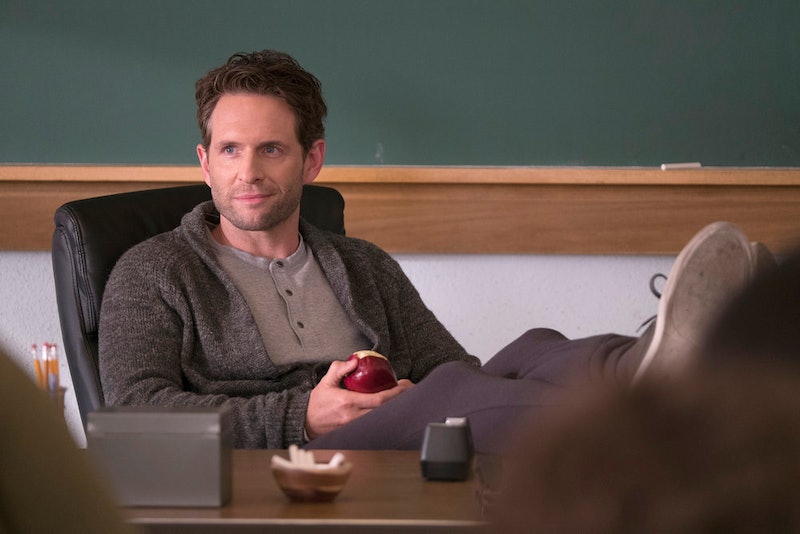 NBC's A.P. Bio piques curiosity from the get-go as Jack, a Harvard professor-turned-high school biology teacher, insists he'll be tasking students with ruining the life of his nemesis instead of leafing through their textbooks. Though his character, stuck in his self-absorbed, arrogant ways, certainly doesn't start off as a traditional role model for his students, A.P. Bio star Glenn Howerton insists that Jack's story isn't necessarily one of redemption. Television, the actor says, offers a unique vessel to explore the consistent and often unchanging failings of a character, unlike movies, which usually guarantee some kind of meaningful development.

"One actual difference between them is that Jack actually is smart and Dennis just thinks he’s smart."

"In a film, characters have to grow, and they have to change by the end of the movie. They have to learn something. And I think that’s great, and it makes for really interesting drama, and it makes for something aspirational," he says, speaking over the phone in February. "[But] it’s a beautiful thing that television can do, which is to show a little bit more of the reality of the situation. Most people are kind of stuck in their ways, and they don’t change, and they don’t grow. And they f*cking refuse to admit that they’re not as good as they say they are, or that the way they’re living their life isn’t actually working. And I think there’s a lesson in that, too."

Howerton says that, in that way, Jack — who's hell-bent on exacting revenge on an old colleague who has wronged him — reminds him of his time as Dennis on It's Always Sunny In Philadelphia. There's something special, he says, about playing a character who lacks the self-awareness necessary to meaningfully grow, and Dennis and Jack have that in common. "There’s a lesson in watching people behave horribly and fail at it over and over again, so that if you see a little bit of that in your life, it becomes a little bit of a lesson for you," he continues.

Despite the comparisons that will inevitably be drawn between this new role and the one that is Howerton's most iconic so far, these two are still very different characters. The actor has played Dennis on Sunny for 12 seasons now, and the show's extremely dedicated fanbase has come to expect a certain level of delusion and shameless behavior from his characters. While A.P. Bio's Jack has his flaws, there are also levels beneath the surface that Howerton doesn't think exist in Dennis.

"One actual difference between them is that Jack actually is smart and Dennis just thinks he’s smart," he laughs. "[But] I think Dennis is arrogant to the point of extreme narcissism, and to the point where there’s almost nothing … he’s almost like a Darth Vader level of evil, as opposed to Jack. Jack, I think, is actually a really, really good guy, masking a sense of good guy with this arrogance because he’s afraid of getting hurt."

While the show won't necessarily shy away from exploring these more empathetic levels of Jack, Howerton says it's important to those making the series that A.P. Bio never feels "sappy." He's still excited, though, to showcase a more dramatic side of his acting repertoire.

"It was important to us to show the heart behind this guy, which I never really got to do with Sunny. I’m excited for people to see some of that stuff because I think it makes the show better," he says. "But also just selfishly, I do want people to be able to see that I am trying to bring a different performance to this than I did with Sunny, regardless of the similarities that are there."

Howerton still remains very much involved in It's Always Sunny In Philadelphia, by the way, of which he is also a writer, producer and co-creator. Though the future of his onscreen persona is unclear. He insisted recently that that A.P. Bio isn't "taking him away" — any possible departure for Dennis would be strictly a creative choice, he stated in a series of tweets last month.

Further distanced from Dennis, part of the reason Jack remains an empathetic character despite his arrogance is the fact that there's a genuine struggle behind it. Howerton says above all, he just feels bad for Jack. "He’s a guy who has the world on a string, but because he was so smart he never had to grow emotionally," he says. "He never had to mature as a person, because he was able to get by just being smart. Now, that lack of maturity has lead to him not being able to conduct himself in a way that he’s able to keep his job. At least before, he could go, 'Well, yeah, I’m arrogant and I’m immature, but you’re working in a f*cking coffee shop, and I’m the Harvard philosophy professor.' He at least had that to sort of stand on."

Flanking Howerton's performance are both TV staples like the wonderfully aloof Patton Oswalt, who plays the school's desperate-to-be-cool principal, and relative newcomers who manage to hold their own in a large cast. A.P. Bio's ensemble is a change for Howerton after working with the smaller, tight-knit cast of Sunny for so many years, but he said it's just as fulfilling of an experience.

"[The transition] would’ve been tough if they weren’t so f*ckin’ good," he says of his new castmates, adding that he particularly loves how the other teachers, played by Lyric Lewis, Mary Sohn and Jean Villepique, lovingly take his character down a peg or two like his adopted big sisters. "The kids are so great, and Patton is so funny," he continues. "If it hadn’t been that way, it probably would’ve not felt so good, just because I’m so comfortable working with Rob [McElhenney], Charlie [Day], Kaitlin [Olson] and Danny [DeVito] now, on Sunny. It would’ve felt like a step in the wrong direction if the people I was working with weren’t so fun. But instead, it’s the opposite."

A.P. Bio is full of promise — aside from the notoriety Howerton and Oswalt bring to the project, it's also backed by creator and Saturday Night Live alum Mike O'Brien, as well as powerhouses Seth Myers and Lorne Michaels, who act as executive producers. It's also just downright funny, with legitimate and somewhat unexpected laughs stemming from its unique premise. Howerton seems excited for the rest of the show to play out.

"I’ve fallen in love with surprising people and giving people something they’d never seen before," he says. "And I felt like I’d never quite seen anything like this." That air of the unknown offers endless opportunity for A.P. Bio as it progresses, and if the excitement of a comedy veteran like Howerton is any indication, there's plenty more it has to offer. Just don't plan on Jack reaching full maturity any time soon.

More like this
Liz Feldman Explains The 'Dead To Me' Series Finale & Fan Theories
By Brad Witter
How The Thanksgiving Episode Of 'Gossip Girl' Changed Pop Culture History
By Gabrielle Bondi
The 'Kenan & Kel' Reunion On 'SNL' Took A Dramatic Turn, Thanks To Keke Palmer
By Brad Witter
The First Trailer For 'That '90s Show' Includes So Many Nods To The Original Series
By Jack Irvin, Alyssa Lapid and Grace Wehniainen
Get Even More From Bustle — Sign Up For The Newsletter