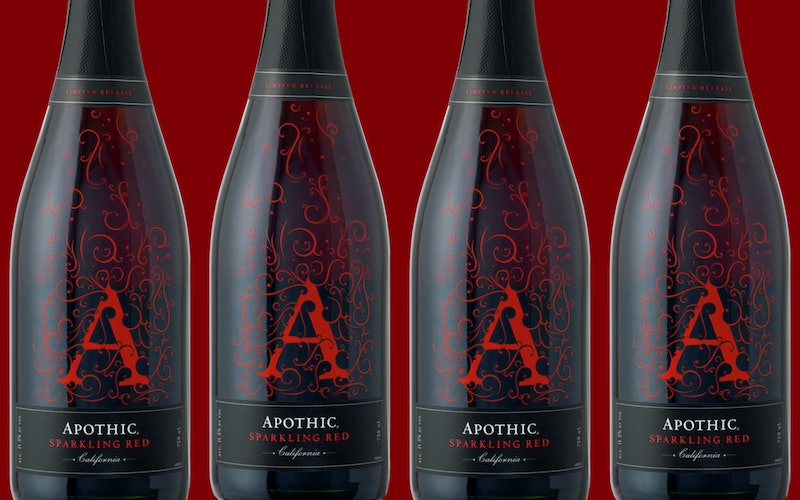 If you're a red wine lover, you're probably already more than familiar with Apothic's lineup, which includes Apothic Red and Apothic Crush along with eye-catching varieties like Apothic Brew, Apothic Dark, and Apothic Inferno. But while Apothic's red wines have always had a flair for drama, the brand is now releasing a variety that's every bit as playful as it is edgy, in the form of a limited-edition Apothic Sparkling Red. If you were looking for the perfect drink to marry your love of summer with your love of all things cozy and sweet, this one might just be your best bet.

“Our fans love sparkling wine, but wish it could be less pretentious, less delicate and more flavorful,” said Heather Austin, Apothic’s Director of Marketing, in a release provided to Bustle. “Apothic Sparkling Red is a complete departure from all things conventional sparkling wine. It’s not white, it’s unexpectedly red and surprisingly refreshing. It’s not arrogant or pretentious; it’s rocking out with friends or watching your favorite streaming show. And most importantly, it’s seriously good.”

Bustle had the opportunity to try Apothic Sparkling Red ahead of its wide release. The press release claims that the new variety "pairs with everything," and although this is a bold claim, it's one that I'm pretty sure it has the right to — while it has some of that distinctive depth of other Apothic red wine varieties, there's also a sweetness to it that makes it much more of a casual sip, and lends itself well to pretty much anything — be it something hearty like pizza, something more delicate like sushi, or straight-up dessert (my main three food groups, to be clear). I'd say it's ideal for people who lean toward sweeter white wines, but don't like it when they veer into too sweet, or maybe toward red wine drinkers who are looking for something a little lighter in fare. It certainly also was ideal for someone like me, who's usually on the fence about which kind of wine I want on any given night — in a way, the Sparkling Red is sort of the best of all worlds, offering a less aggressive sweetness than sweet white wines, a more mild "sparkling" factor than something like a bubbly Prosecco, and that distinctive undertone of red wine — a blend that showcases "bright cherries, zingy citrus and red apples," according to Apothic.

Fans of Apothic know that although the brand offers an Apothic White and an Apothic Rosé, its primary goal seems to be pushing the edges of the red wine world. Limited release Apothic Brew famously infused cold brew in its blend; Apothic Inferno clocks in an impressive ABV of 15.9%, courtesy of being aged for 60 days in actual whiskey barrels; and Apothic answered red wine lovers' calls for more single-serve options with the launch of Apothic Red aluminum bottles back in May. Essentially, Apothic Sparkling Red may seem like a departure from the usual red wine fare, but in that regard its in good company.

Apothic Sparkling Red will retail for $15.99 and is available nationwide starting on Sept. 1, both in stores and online at The Barrel Room. A pro-tip to those making online orders out there — if you buy three bottles, you can use the promo code SPARKLINGRED to get shipping for one cent, and also score a limited edition Apothic Sparkling Wine Stopper. Happy sipping, y'all.