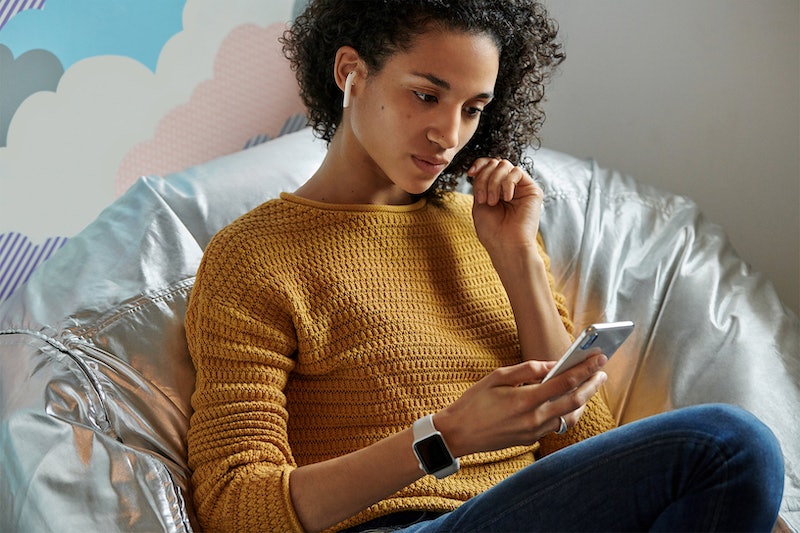 So, hey, guess what happened while we were all asleep last night? Apple dropped the second generation of AirPods — the company’s wireless headphones — into the Apple Store. They won’t be available at brick-and-mortar stores until next week, but if you absolutely have to have them, you can order them on Apple’s website and in the Apple Store app literally right this very second. Talk about a pleasant surprise.

“AirPods delivered a magical wireless experience and have become one of the most beloved products we’ve ever made,” Apple’s senior VP of Worldwide Marketing, Phil Schiller, said in a press release. “They connect easily with all of your devices, and provide crystal clear sound and intuitive, innovative control of your music and audio.” And, according to Schiller, “the world’s best wireless headphones just got even better with the new AirPods.”

The second generation of Apple’s wireless headphones include a bunch of improvements over the first generation. The H1 chip they utilize, for example, provides up to 50 percent more talk time, according to a press release; additionally, connect times are quicker, making switching listening between Apple devices easier. The headphones are also now equipped with “Hey Siri,” enabling you to switch songs, make calls, adjust the volume, and more using verbal “Hey Siri” commands.

The new AirPods with the standard charging case will continue to sell at the $159 price point they’ve had since the first generation arrived, while AirPods with the Wireless Charging Case will go for $199. You’ll also be able to buy the Wireless Charging Case separately for $79. Both cases hold around 24 hours of listening time; additionally, the wireless case is compatible with Qi-based charging tools. Personalized engravings for the two AirPod bundles are free, if that’s your jam. Each item is available to order on Apple’s website and within the Apple Store app starting today; you’ll be able to get them at brick-and-mortar Apple Stores next week.

I’ll admit that personally, I’m a little leery of wireless headphones (of all varieties, not just Apple’s. The issue for me is that they require a charge to work — and when your phone or MP3 player also requires a charge… well, let’s just say that I don’t love the fact that my ability to listen to music or podcasts during, say, a long flight is dependent not on one, but two battery-powered devices that could fail at any time (we’ve all experienced the pain of plugging in an electronic device to charge for a good, long while, only to find when it’s too late something interfered with the charging process, right?). Despite this potential issue, though, wireless headphone use has quickly grown over the past several years; what's more the technology itself has been dramatically improving all the while.

Although there was quite the uproar in 2016 when we learned that the iPhone 7 would not include a standard 3.5mm headphone jack — a move some felt was intended to strongarm consumers into buying the then-newly-released first gen AirPods — the removal of the jack has turned out to be, as tech reviewer Jonathan Kim wrote at Rethink Reviews in 2018, a non-issue. Indeed, it’s industry standard now, which most phone manufacturers foregoing the jack. (Also, at the time of the iPhone 7’s launch, a set of headphones that plugged into the device’s lightning port were included in the box — a practice which Apple has continued ever since. So, you can still use wired headphones if you really want to.)

In fact, Apple’s AirPods turned out to be a “runaway hit,” according to the company’s Q2 2018 earnings report. We don’t know the exact sales figures — Apple doesn’t disclose them, instead lumping them in with the “Other Product” earnings category — but as Mac Rumors pointed out at the time of the report’s release, the “Other Products” category’s revenue increased a whopping 38 percent. It’s believed that AirPod sales had a lot to do with that jump. Furthermore, according to Statista, famed Apple analyst Ming-Chi Kuo believes Apple “could sell 50 to 55 million pairs of AirPods this year and double that figure by 2021.” If they stay at the same price, that would amount to earnings of more than $15 billion in annual sales.

Will the new generation of AirPods continue to be as popular as the first? Only time will tell. But also know that the new AirPods aren’t the only headphone-related trick Apple has up its sleeve for 2019; according to Business Insider, the company intends to release high-end, over-ear headphones meant to be “as convenient as AirPods with better sound quality.” If you prefer your headphones a little heavier duty than AirPods, you may want to hold off on upgrading — because more is likely to come.

In the meantime, though, you can find out more about the second gen AirPods at Apple’s website.