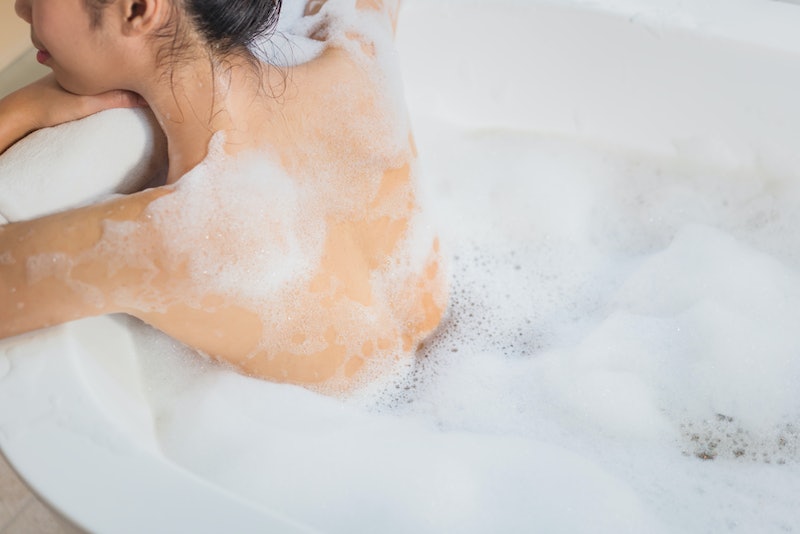 While submerging yourself in a hot bath is likely the least appealing thing you can think of during a heatwave, you might want to crank up the AC and have yourself a long soak. Why? Taking five hot baths a week is good for your health; it could lower your blood pressure as well as reduce your risk for heart attacks and strokes, according to a new study published in the journal Nature. While it's true that taking cold showers has been touted as the secret to feeling more awake, taking hot baths could actually help you live longer. The key word here being "hot."

"Water immersion is associated with increased volume of strokes, reduction of heart rate, an increase in cardiac output, and reduction of total peripheral vascular resistance," the study explained. "[However], it has also been repeatedly demonstrated that hot water immersion has favorable effects on cardiovascular function in patients with heart failure."

Many countries around the world offer public hot-bath facilities where people can go to socialize and submerge on the cheap. In the U.S. these are known as spas, and if you can't afford to shell out the big bucks for five soaks a week, your bathtub at home can provide the same benefits.

A previous study, published in the journal Temperature, did indeed find that taking a hot bath provides benefits similar to that of exercise, according to The Conversation. The study noted that for people who aren't physically able to exercise, regularly taking hot baths can actually improve cardio-metabolic health.

According to WebMD, this type of therapy is referred to as passive heating, and while research is in its earlier stages, it does have some potential benefits. If you have time to spend an hour in the tub (if you even have a tub) submerged in really hot water five days a week, a relaxing soak could help lower your blood sugar; decrease inflammation; lower your blood pressure a few points; and reduce your risk of heart attack and stroke, Dr. Michael Smith reported for WebMD.

He stressed that while hot baths are beneficial for physical and mental health, if you are physically able to exercise you shouldn't replace physical activity with a hot bath. It's best to do both. But, before you fill up the tub, hot baths are not for everyone. Other studies have found that some people experience hot-bath-induced headaches and dizziness.

What's more, for people with certain auto-immune diseases like multiple sclerosis, hot baths and other heat-related activities can exacerbate symptoms. If you have migraine headaches or an auto-immune disease, and submerging yourself in hot water makes you feel worse, it's not worth putting yourself through the hot-bath routine for the small chance that you could reduce your risk for future medical problems.

"Activities including sunbathing, exercise, and taking very hot showers or baths can [worsen symptoms]," the National MS Society explained on its website. "For example, some people notice their vision becomes blurred when they get overheated — a phenomenon known as Uhthoff's sign."

The National MS Society recommended that people with MS bathe or swim in water temperatures of 85 degrees or lower. Additionally, while the new study reported that hot baths are beneficial for people with heart failure, the Cleveland Clinic warned that people with existing heart conditions should avoid hot baths and hot tubs altogether.

"A sudden rise in body temperature creates significant stress on the cardiovascular system, predominantly via a cascade of adjustments resulting in an elevated heart rate," Cardiologist Dr. Curtis Rimmerman explained on the Cleveland Clinic's website. "The higher heart rate — especially in the presence of reduced heart function, heart arrhythmias and coronary artery blockages — can precipitate a cardiac event such as blood flow problems and, in the worst case scenario, manifest as a heart attack."

If you have a heart condition, it's best to ask your doctor before committing to five hours a week of hot bathing. That being said, if you don't have any pre-existing health conditions, and you want to take more hot baths, the myriad benefits of hot bathing gives you the excuse you've been looking for — not that you need an excuse to treat yourself to five hours of self-care a week. If baths aren't your jam, choose another form of self-care and give yourself a well-deserved break from the ongoing dumpster fire of the real world.