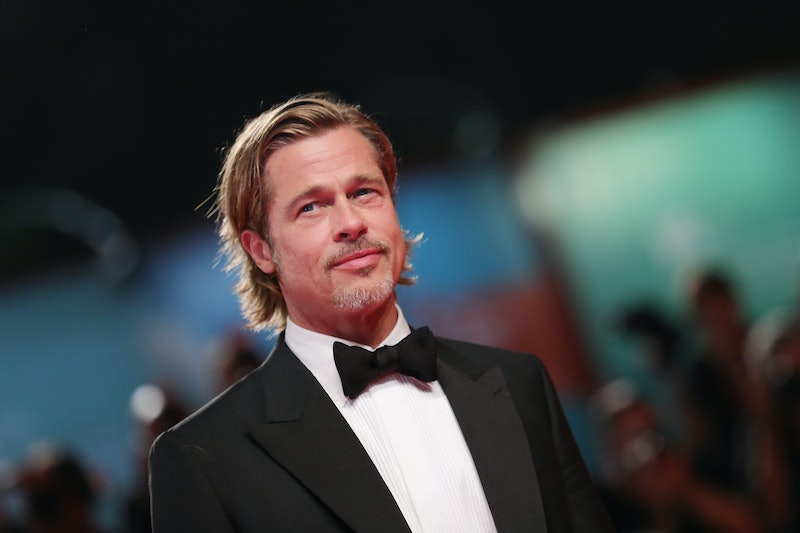 It's been a while since Brad Pitt was spotted with a girlfriend by his side, but that certainly hasn't stopped the rumor mill from turning. This time around, he's sparking rumors with a low-key lady he was photographed with last year, which has some fans wondering if Pitt and Sat Hari Khalsa are actually dating. According to Us Weekly, she and Pitt are definitely an item, but another report from E! News suggests the pair are just friends. (Bustle reached out to Pitt's rep for comment.)

This likely isn't the first time you've heard Khalsa's name. In September 2018, she and Pitt were spotted together at the Silverlake Conservatory of Music Gala, an annual benefit hosted by the Red Hot Chili Peppers. They weren't canoodling or anything intimate like that, though — just sitting next to one another, smiling, chatting, and looking generally pretty happy to be there. Still, there was some speculation about the nature of their relationship way back then.

It's unclear how exactly the pair first met, but Khalsa definitely has more than a few connections to Hollywood. According to People, Khalsa "once toured with the Red Hot Chili Peppers, acting as the band’s spiritual healer." She's also a luxury jewelry designer — her company, AMRIT, is named after her daughter — and counts celebs like Emma Watson, Gwen Stefani, Kate Bosworth, and Pitt's ex-wife, Jennifer Aniston, as fans.

Recently, though, Khalsa and Pitt were snapped leaving the after-party for his new film Ad Astra together, which caused rumors of a romance to bubble up yet again. According to a source for Us Weekly, "Sat is very special to him and someone he enjoys spending time with," but he's not in the "mind-set" for a serious commitment right now. The insider also added that Khalsa "is earthy" and "very strong, and has a beautiful mind. That’s what he’s attracted to."

However, a source for E! News was quick to dispel that report, and claimed any suggestion of them being more than friends is "entirely false." A second insider for the outlet revealed that, at the after-party, "[Khalsa] was with another girlfriend and was talking to Brad ... but, at no point during the party did there appear to be an obvious PDA or any indication that they were romantic." E!'s source continued, "Brad didn't really talk to her much, he was talking to different groups of people. It was just friendly and not romantic."

Beyond that, Khalsa has apparently been "providing [Pitt] with some guidance and has been a welcome breath of fresh air and spirituality in his life," a source further explained to E!. "He feels like he has a lot to learn to better himself." That sounds about right, considering what Pitt had to say during an interview with The New York Times at the beginning of September. In it, the actor opened up about his split from Angelina Jolie in 2016, which was reportedly a result of Pitt's excessive drinking habits — a habit that he kicked soon after their breakup.

"The fact is, we all carry pain, grief and loss," Pitt told the Times. "We spend most of our time hiding it, but it’s there, it’s in you. So you open up those boxes. I had taken things as far as I could take it, so I removed my drinking privileges."

Pitt hasn't publicly commented on the nature of his relationship with Khalsa, but it definitely sounds like his main focus right now is self-improvement. That being said, you should probably take Us Weekly's romance report with a grain of salt, especially when it comes to their latest cover, which features Pitt with a headline that reads, "Yes, I'm in love again!" In love with himself and the person he's becoming, perhaps. In love with Khalsa, though? Only time will tell.

More like this
Brad Pitt’s Recent Dating History Includes A German Model
By Brad Witter
Gwendoline Christie’s Partner Is Part Of Royal Family History
By Parry Ernsberger and Sophie McEvoy
Who Is Camila Cabello Dating? She's Getting Cozy With Lox Club CEO Austin Kevitch
By Radhika Menon
'Indian Matchmaking's Arshneel Is Keeping His Potential Courtship With Rinkle Private
By Radhika Menon
Get Even More From Bustle — Sign Up For The Newsletter