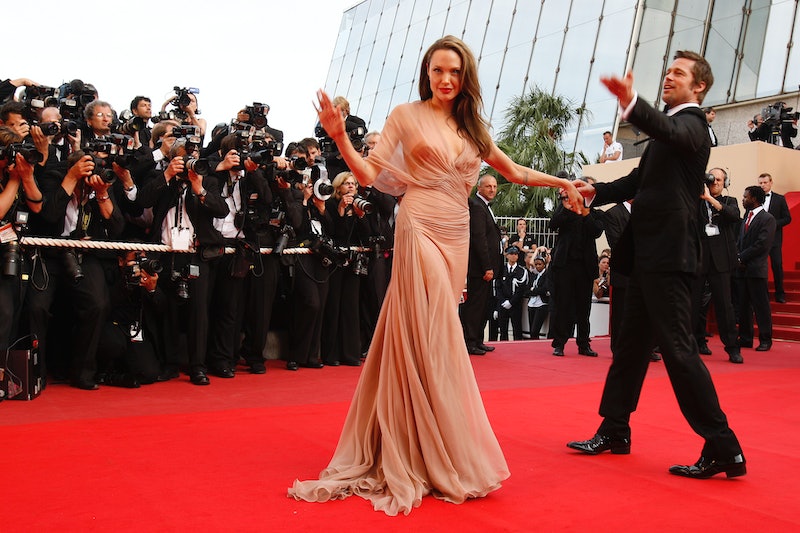 There's a saying that relationships that don't begin well don't end well, either. With Brad Pitt and Angelina Jolie's relationship the topic of every major headline over the past couple of days, it's hard not to think about how they started out 12 years ago. As the story goes, Jolie and Pitt met and allegedly fell in love while they were filming Mr. & Mrs. Smith and while Pitt was married to Jennifer Aniston. Regardless of whether or not Pitt and Jolie ever had an actual affair, everyone pitched a fit after Pitt and Aniston broke up, and suddenly there were two kinds of people in the world: Team Jen and Team Angie, even though it was and still is totally sexist to pit these two women against each other over one man. And by the way, let's not forget that it takes two to tango.

Regardless of the circumstances surrounding the origins of Brad and Angelina's relationship, one thing is certain — with all the rumors and media scrutiny, it certainly got off to a tricky start. But does that mean it was doomed? Here's what an expert has to say about the fate of relationships that stem from controversial beginnings.

"The conditions of an affair — the secrecy, sneaking around, the delayed reward of the affair partner — all heighten one's feelings of infatuation," relationship expert Anita Chlipala tells Bustle about couples whose relationships stemmed from cheating.But once they start a real relationship with the person they cheated with, they'll once again have couple milestones and day-to-day responsibilities that naturally come with having a partner, not just a fling.

Chlipala explains there's also a type of person who tends to start affairs: conflict-avoidant, which essentially means they don't like to deal with disagreements or fights of any kind. If someone wants to change and no longer carry out affairs, they have to learn how to deal with conflict. So unless there's some real talk going on, couples on a rocky start might be heading to Splitsville in the future. In fact, 75 percent of marriages that started as affairs end in divorce, according to Not 'Just Friends': Rebuilding Trust And Recovering Your Sanity After Infidelity by Shirley Glass. "The person who ended up cheating should do an inventory of why they did what they did or seek out professional counseling to figure it out," Chlipala says. "Just because they switched partners doesn’t mean it’s not going to happen again."

Also, what starts out as toxic may actually not be considered "toxic" by the people in the relationship, she adds. Like with many new relationships, couples in complicated situations still see their partners as the one. "The rose-colored glasses are extremely rosey in the beginning of a relationship," Chlipala says. What's important is that, once those glasses come off, the couple is communicative about their needs, their definition of terms like "cheating" and their expectations given the history.

"Anxiety, jealousy, and trust can absolutely resurface," Chlipala says of affairs-turned-relationships. "If a couple can’t answer the question, 'If you cheated with me, how do I know you won’t cheat on me?' in a satisfactorily way, it can happen again. And the person(s) who cheated can’t answer the question with, 'Because I love you.' Love isn’t enough to keep people from cheating."

Whatever the situation may be, a relationship needs to be grounded in trust, honesty and openness for it to succeed in the long run. Even if you're happy together at the beginning, things could change. Almost everyone was shocked and devastated to hear the news about Pitt and Jolie, and some even hoped that they would get back to together. But sometimes long-term relationships that seemingly look perfect on the outside might still be harboring a lot of resentment or internal conflict underneath. And research shows that it's better for your health to end an unsatisfying relationship, so if breaking up is what Pitt and Jolie ultimately need, then who are we to plead for them to reconcile?