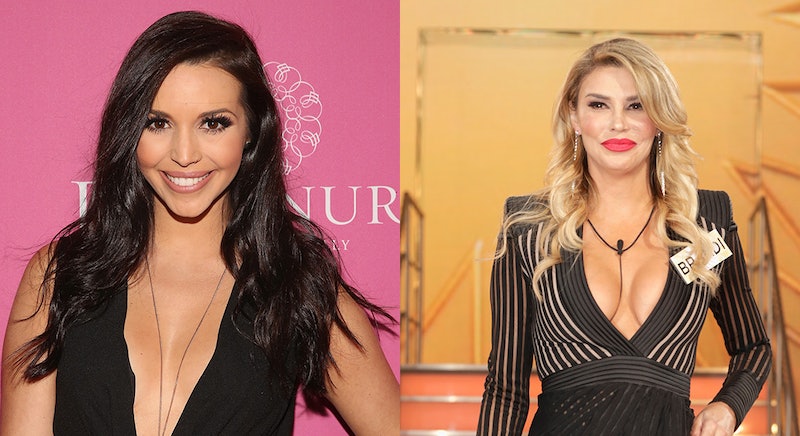 Well, this puts the SUR in surreal. A few days ago, Brandi Glanville and Scheana Shay took a video together, meaning that Brandi and Scheana might be friends again. As if that wasn't enough of a shock to the system, they went and added a filter that made it so it looked tiny heart-shaped bubbles were emanating from their heads. And Brandi put the video on Instagram. And it's all happening.

It feels like only yesterday we were watching these two begrudgingly hash things out in one of the SUR dining rooms. But it wasn't yesterday; it was over five years ago. And now, in 2018, Brandi and Scheana are on friendly terms and taking heart bubble-covered videos together.

On Monday, a whole bunch of Bravolebrities descended upon the Wiltern Theatre to tape "The Night of 31 Doorbells" episode of Watch What Happens Live with Andy Cohen. The episode, which aired on April 11, included a bunch of Bravo icons, including Brandi of Real Housewives of Beverly Hills and Scheana of Vanderpump Rules. And at some point in the evening, the two former adversaries recorded a video. It's almost like the whole Eddie Cibrian mess never happened.

But the Eddie mess did happen. And several years later, the unthinkable happened: Brandi and Scheana put the mess behind them and became buddy-buddy.

Brandi and Scheana's Bravo saga began on RHOBH Season 3 when Lisa Vanderpump asked Brandi to talk things out with one of her SUR employees. The employee was Scheana, Vanderpump Rules star and former mistress of Brandi’s ex, Eddie. After a few uncomfortable minutes, their meeting was over, and the backdoor pilot to the great series that is Vanderpump Rules began.

While Scheana and Brandi didn’t become best friends, the tense and emotional conversation seemed to be a relatively productive step. As Brandi told Us Weekly back in 2013, "I'm glad we talked. And when I see her now, I say hello and it's really not a big deal.”

No, stuff wasn’t always civil after their sit-down (see: the gnarly things Brandi wrote about Scheana in her book Drinking and Dating). But eventually, things did cool down in a big way. If you thought Giggy the Pom would sprout wings and fly around Villa Rosa before Brandi and Scheana would voluntarily hang out together at a music festival, first of all, that’s a reasonable assumption.

However, it is not exactly a correct assumption. When Scheana appeared on Bravo’s The Daily Dish podcast in January, she revealed that Brandi had asked her to be on her podcast. However, given Scheana’s loyalty to Lisa Vanderpump (the LVP vs. Brandi feud is another story for another day), she turned it down. Podcast stuff aside, she is happy she and Brandi are in a pretty good place nowadays. She said,

“Before Lisa and I knew each other, Brandi and I had a feud for years already. So to be able to kind of squash that and be cool with each other, and when I see her out— I ran into her at Coachella. Rob [Valletta] and her boyfriend hit it off and they were talking, and we hung out. Whenever I see her, just to be able to not get that evil eye death stare, it feels good.”

And they’ve been cool with each other for over a year. In Jan. 2017, Brandi sent shockwaves through the Bravoverse when she went on WWHL and said she liked Scheana. She told Andy Cohen,

“Honestly, Scheana’s the only girl I like this season on Vanderpump Rules … She seems like she’s the only one that has the voice of reason. She’s being normal.”

Less than a month later, Scheana stopped by the Bravo Clubhouse and revisited the stunning clip of Brandi singing her praises. “My jaw dropped,” the "Good As Gold" singer laughed. “I was like, ‘Rewind.’ And then I went to tweet her and I was like, ‘I’m still blocked.’”

Brandi’s response? Oh, just some words of encouragement to Scheana and a block removal. “Watched #WWHL w/@scheanamarie & unblocked her but I'm blocked,” Brandi wrote. “@Andy tell her that I know how difficult divorce can be! Hang in there!” Scheana replied to Brandi with three heart emojis.

A few days later, both Bravolebrities attended OK! magazine’s Grammy party. And at some point during the evening, Scheana posted a pic she and Brandi took together on Snapchat. According to E! News, a source claimed the two were “hanging out throughout the night” and “hugging and putting on makeup together.”

And just this week, Brandi and Scheana were hanging out at a WWHL taping, making jokes about having a similar taste in dudes, and taking videos together like old pals. It is official: Literally anything is possible.