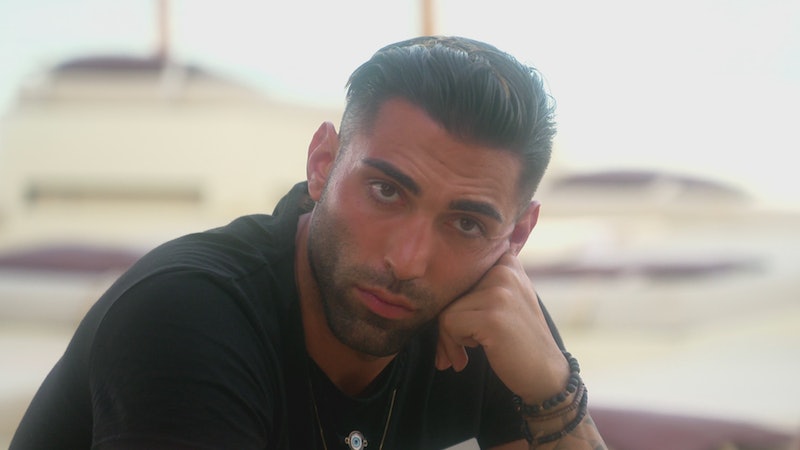 Lindsay and Panos made it clear from Day 1 that they didn't want any of their VIP hosts to start having relationships that would get in the way of them doing their job. But the threat to their long-term contracts with the Lohan Brand didn't deter Brent and Sara, who decided to get together anyway. And then apart. And then together again. And now, by Episode 10, it looks like the pair have called it off for what is probably — maybe? — the last time. After their most recent flair ups it would be ridiculous to assume that Brent and Sara from Lindsay Lohan's Beach Club are still together. But with these two, it's entirely possible.

The question that seemed most pressing from the moment Brent Marks and Sara Tariq started to get together, at least for me, was why, Sara, why? Brent treated Sara miserably, just like he treated all the women in the house. That attitude never really wavered, although the two of them wound up getting together anyway. In a recap she wrote for Us Weekly, Sara gave a little more insight into why she decided to give Brent another chance in the first place. And honestly, it doesn't really sound like the type of solid foundation long-term relationships are built on.

"Here’s my defense: Prior to coming to Greece, as I mentioned on the show before, I had been working Wednesday through Sunday nights with only Mondays and Tuesdays off which equals no social life. That also means I had no time for f—k boys or any love interests at all. So, your girl was clearly deprived from all affection/attention and went to Greece with not one but two options — one of which was clinging on to me like I was the only girl left in the world (much of which happened off camera). The other wanted me to put the work in and chase him … I think you guys know who’s who."

So, Brent was all over her and Billy was playing hard to get. And it's worth giving Sara the benefit of the doubt. She must have been under a lot of pressure in Mykonos, and, despite the fact that Lindsay and Panos kept repeatedly telling all the VIP hosts not to start relationships, the season would have been a lot less interesting if Brent and Sara had listened to that advice.

After Episode 10 aired on Monday, March 11, Sara took to her Insta story and added a gif from the episode with the caption, "Don't hate the playa hate the game," which shows she still doesn't feel too remorseful about how things went down with Billy on that yacht.

More to the point, she posted another gif of her and Jonitta with the caption "Cheers to being single for the rest of my life bc we can't stop listening to City Girls & Future." Sounds like she's probably not looking to start things up with Brent — or anyone else — anytime soon.

In her Episode 10 recap with Us Weekly, she went a bit more in-depth about her feelings that day on the yacht, and that she wasn't really trying to hurt Brent intentionally. "I actually do have a soul, though, and I did feel bad for Brent, yet I decided to be a little selfish this day," she explained. "There’s nothing wrong with that. Sometimes you need to think about yourself before others because self-love is important. Frankly, I feel like you can never have enough and I need more of that for myself — still, to this day." Again, this does not sound like the confession of someone dying to patch up her old relationship.

If that's not enough evidence to convince you, Brent also threw shade at Sara via his own Instagram story, calling her "a typical industry girl." Nice to know that some people never change. *eye roll*

So, even if they haven't come right out and said it yet, I'd be shocked if Brent and Sara had managed to work it out and stick together after filming Lindsay Lohan's Beach Club. Not that they ever really made any sense together in the first place.