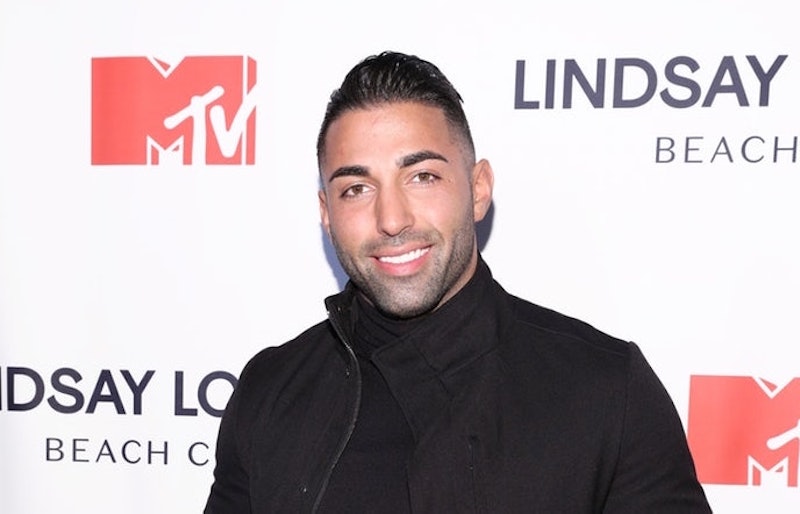 In Episode 2 of Lindsay Lohan's Beach Club, Brent who also works as a VIP host of Winn Nightlife in Las Vegas, per his Instagram bio, has been flirting with Sara since the season premiere. Things start to fall apart when bartender Billy also makes a play for Sara's affections. Threatened by the fact that Sara might prefer another guy, Brent callously tells Billy, "Take her. Because I don't need to compete for anybody." As the camera pans to show the other residents of the house eavesdropping on their conversation, Brent chugs his bottle of liquor and adds, "We are in a house of all ugly girls."

Umm, excuse me? Rightfully enraged, Sara confronts Brent, dumping a bottle of tequila over his head in front of everyone. Maybe that wasn't the most mature way to communicate her feelings, but hey — she made her point.

Afterward, all the girls in the house rally together for the first time, proud of Sara for bringing Brent down a peg for his sexist comments. Brent, on the other hand, launches into a downward spiral, drinking all night and then later mouthing off to Panos. Unbeknownst to Brent, Panos tells Lindsay everything, and Lindsay didn't mince words about Brent's need to shape up or ship out.

"If they don't change, we'll find ten more people to do that," she said, talking about her employees. "They're disposable."

Clearly, Lindsay Lohan's Beach Club is setting Brent up for a massive fall later this season. Already, plenty of cast members — including Lindsay and Panos — have mentioned that he might have to head back to Las Vegas before the end of the summer if he can't keep his attitude in check. Although you have to request to follow him on Instagram, Brent has been tweeting since the premiere so it looks like he probably sticks around. And he keeps saying that he has "no regrets" about his actions on the show, including making out with one of the guests he was supposed to be catering to.

Brent is definitely controversial, and the show is gearing up for a redemption arc any time soon. Then again, he does seem to have a ton of experience and the guests *have* left happy so far. It's possible that once he talks to Lindsay and Panos again and stick to focusing on his work (and not calling out the women's bodies every chance he gets, they'll be happy to have him around. Just don't expect his colleagues to follow suit.