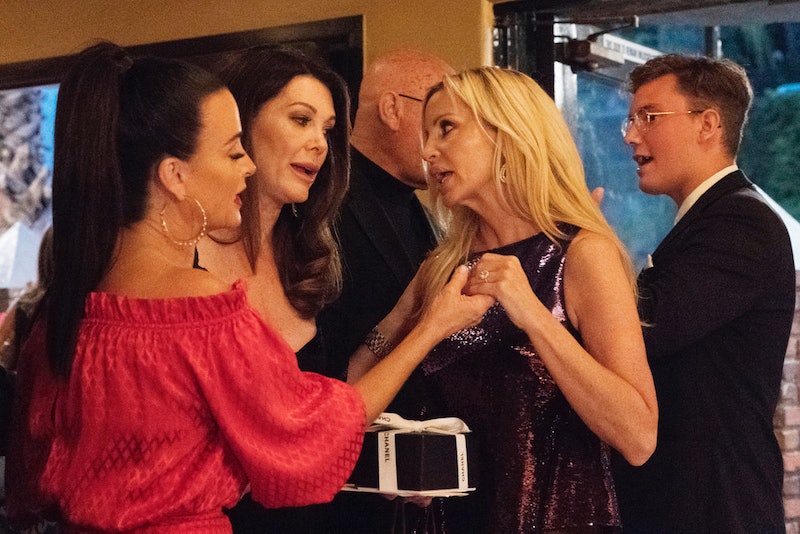 Are there any moments on this Real Housewives of Beverly Hills season that do not revolve around Lisa Vanderpump? She's either in the scene or a topic of conversation. And the April 9 episode ended with the ladies laughing at comments Camille Grammer was making at Lisa's expense. Was she picking sides? Was she really talking that much trash? And most importantly, are Camille and Lisa Vanderpump friends after RHOBH? Because the former series regular had a lot to say.

Believe it or not, they actually are, but let's revisit that super snarky scene from the last episode first, because it was just too good. The group was enjoying some cocktails outside, but no one needed sunglasses seeing as Camille brought enough shade with her. She first revealed to the group, "I'm an ex-dental assistant." Then she explained, "So, I'm really funny about teeth for real."

She began, "Before Lisa Vanderpump got her teeth redone...I had such an issue with the gums. It's like, honey, you need new caps. Your gum line is receding."

Camille eventually concluded, "But now, they look great." Nevertheless, that just wasn't a good look for the OG cast member. Even though she didn't say anything too serious, her snark was aimed at a cast member with a super loyal fanbase. She should probably avoid social media for a couple days. During the episode, Camille joked, "I'm going down. Just bring the casket to my wedding." Again, she's bound to get some heat on social media.

In her on-camera interview from that same episode, Lisa Rinna asked, "What is happening to Camille? What does she really feel about Lisa Vanderpump?" Those are such great questions.

Before the episode even aired, Camille tweeted her regret over those remarks.

Camille was not LVP's best friend in that scene, but at this point in time, she seems to be her closest friend in the cast. In fact, out of all the current cast members on Real Housewives of Beverly Hills, Camille is the only one who attended the Vanderpump Cocktail Garden opening in Las Vegas in March.

Where were the other RHOBH ladies? Lisa explained their absence in a March 31 interview with Page Six. She said, "Well, I did have an invitation to them because I had it on email and it was all written out for all of them, you know. And they’re not here." Then, she followed up with, "I think it was probably because I forgot to press the send button."

Was that just another example of her self-proclaimed British humor? She had to be joking right. There's no way she invited the others. Well, except for maybe Denise Richards.

In a Feb. 22 interview with Us Weekly, Lisa named Camille and Denise as the two cast members she is on good terms with. Lisa shared, "Denise Richards is always very kind and very sweet to me. She has always been and she texted me today and I definitely connected with her. Camille has always been lovely to me."

Let's hope she still thinks that after watching Camille's criticism of her dental work. Then again, actions speak louder than words and Camille was the only one who attended Lisa's big event in Las Vegas. Lisa hinted to Page Six that Camille was there for something RHOBH-related, saying, "We’re actually filming Housewives here tonight, funny enough." (Didn't the season wrap, though? The timeline is so unclear.)

Even though those dental remarks were not nice. The Vanderpump Cocktail Garden opening was very recent. At this point, it's clear that these two are on great terms. Did they encounter difficulties after Camille poked fun at her gums? That. Is. Unclear. They might have.

In the preview for next week's episode, it seems like LVP might not be at Camille's bridal shower that Kyle hosted for her. Not only that, but Lisa was noticeably absent at Camille's wedding in October 2018.

However, Camille seemed totally cool with Lisa missing it during an interview with People in October 2018. She insisted that she "understands" why Lisa didn't go and even said, "I respect her decision. Lisa was very apologetic about it."

The fans will have to watch and see if there are any bumps in the road for Camille and LVP, but ultimately, there's nothing to be concerned about. These two are definitely good friends these days.