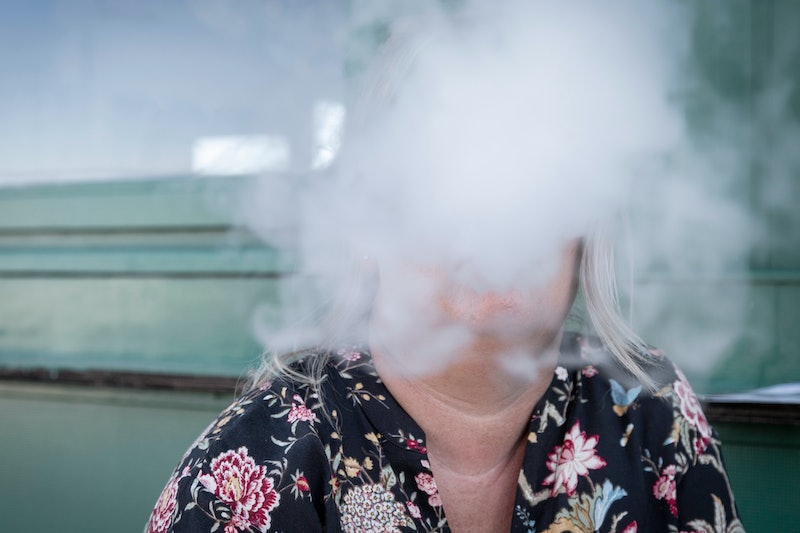 Amidst broader health and policy concerns about e-cigarettes and vaping, focus is now turning to the potential dangers of CBD vapes specifically. CBD is the nonpsychoactive compound derived from marijuana and hemp that is said to have very relaxing qualities, though research is limited. But now, one in three CBD vape pens may contain synthetic and illegal marijuana, according to an investigation conducted by The Associated Press.

The investigation was sparked by the hospitalization of one man who reportedly used a CBD vape and ended up in a coma. The oil in the vape that the man was given was evidently spiked with a synthesized version of marijuana with no known medical benefits. Because forms of synthetic marijuana are cheaper than actual CBD, the AP investigation concluded, there is incentive for unregulated companies to put the synthetic street drug into vape pens labeled as containing only CBD. And because CBD isn't regulated, it's tough to know what's really in your pen.

The AP commissioned testing of 30 different CBD vape pods or cartridges purchased online or in stores in California, Florida, Maryland, and South Carolina. The laboratory tests found that one-third of the CBD products contained synthetic marijuana. Other pods and cartridges didn't contain any CBD at all, even though they were all marketed as CBD products.

While the investigation targeted products that were already suspected to be spiked, the AP also reports that federal and state regulators leave quality control of their CBD products up to manufacturers. So, it might not be possible for consumers to known when to be wart of when products are spiked or otherwise contaminated. In separate testing commissioned over the summer, the AP found this synthetic marijuana compound in products used by 11 people who subsequently died in Europe.

And according to The AP, CBD vapes were not the only products that may be spiked. Government labs have tested 350 CBD products across nine states, most of them in the South, and the AP reports that a survey of these results found 128 of the 350 products were spiked with synthetic marijuana. In 36 of these cases, the spiked products were gummy bears and other CBD edibles.

These cases of misrepresenting what is in CBD products should not be surprising, because mislabeling CBD products is an extremely common practice, according to a 2017 study published in the Journal of the American Medical Association. The study tested a total of 84 CBD products, purchased from 31 companies. It found that companies had inaccurately labeled 70% of products when their labels claimed that the products contained a certain amount of CBD and no other compounds.

So if you're in the market for some relaxation, that's awesome. But according to the CDC, you might want to be aware that products labeled as containing CBD might not be giving you what it says on the tin. Or, if they're laced with synthetic marijuana, they may be giving you something much more dangerous than what you're paying for.