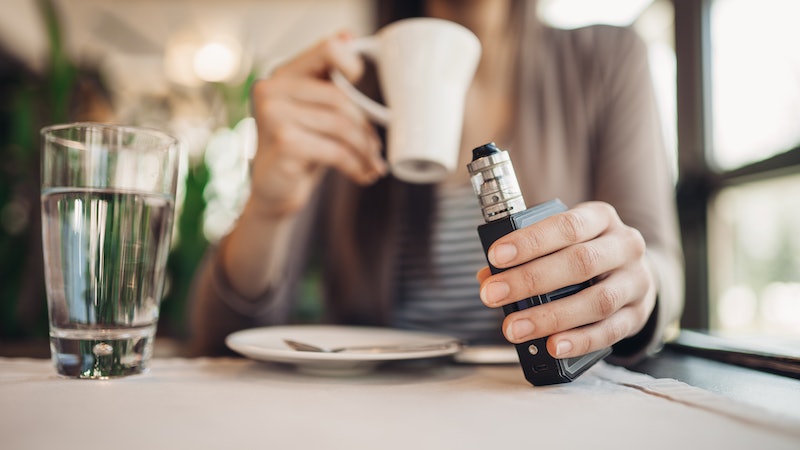 While e-cigarettes were initially thought to be safer than tobacco-based cigarettes, studies have shown that vaping leads to breathing problems. In addition, the U.S. Centers for Disease Control and Prevention recently announced that it's investigating an increase in unexplained severe lung diseases among e-cigarette users. If you vape, and you're wondering how to tell if vaping is hurting your lungs, doctors say there are symptoms to watch out for.

"Wheezing not related to another health condition (such as bronchitis or asthma), dry cough, shortness of breath or difficulty breathing deeply — especially with physical activity, unexplained exhaustion, and rapid breathing" are reasons to seek medical attention, Dr. Niket Sonpal, a New York City-based internist and faculty member at Touro College of Medicine, tells Bustle. He adds that these symptoms can also be a sign of "popcorn lung," a serious and irreversible lung disease.

In a statement issued Aug. 17, 2019, the CDC reported that it's currently consulting with health departments in multiple states where a "cluster of pulmonary illnesses linked to e-cigarette product use, or 'vaping,' primarily among adolescents and young adults" have been reported. The report states that while the investigation is ongoing, there is no evidence that the reported lung illnesses are being caused by an infectious disease. The CDC has identified more than 90 cases of lung illness associated with vaping in the last two months, 30 of which occurred in Wisconsin.

"Symptoms worsened over a period of days or weeks before admission to the hospital," the alert noted. "Other symptoms reported by some patients included fever, chest pain, weight loss, nausea, and diarrhea." Dr. Sonpal says these symptoms can also be an indication of nicotine poisoning.

The alert went on to say that in severe cases, some e-cigarette users required ventilation and steroids. Although all patients reported vaping, no specific product has been linked to the illnesses. A fact sheet from the CDC noted that e-cigarettes contain aerosol and can also contain nicotine, heavy metals like lead, volatile organic compounds, and other cancer-causing agents.

According to the American Lung Association, some e-cigarettes contain a chemical called acrolein, which is a herbicide primarily used to kill weeds, as well as other chemicals known to cause heart and lung disease.

"E-liquid in vapes are found to contain levels of known carcinogens and toxic chemicals, as stated by the Food and Drug Administration. Many of these toxic chemicals that cause lung diseases are also found in cigarettes. Nicotine is the primary element in vapes, which we all know, is highly addictive and has been known to cause certain cardiovascular diseases," Dr. Sonpal says, though he adds that because vaping is so new, it's not yet determined if it causes cancer in the way cigarettes do.

"Cancer takes years to develop, and e-cigarettes were only very recently introduced to the United States. [But] traditional cigarettes contain a laundry list of chemicals that are proven harmful, and e-cigarettes have some of these same chemicals. The body’s reaction to many of the chemicals in traditional cigarette smoke causes long-lasting inflammation, which in turn leads to chronic diseases like bronchitis, emphysema, and heart disease," he says.

"Since e-cigarettes also contain many of the same toxic chemicals, there is no reason to believe that they will significantly reduce the risks for these diseases. There are no long-term studies to back up claims that the vapor from e-cigarettes is less harmful than conventional smoke."

Dr. Alexa Mieses, M.D., M.P.H., a board certified family physician and Assistant Professor in the Department of Family Medicine at UNC-Chapel Hill, tells Bustle that vaping can damage your lungs and other parts of your respiratory system. She adds that vaping is not safer than smoking because anytime you inhale a heated, volatile chemical, you pose a risk to your lungs and overall health.

She advises you should seek medical attention immediately if you experience shortness of breath or have trouble catching your breath, fever, chills, pain when you breathe, or rashes inside your mouth on your gums or tongue.

"Short-term effects [of vaping] can include coughing, choking, a burning sensation in your lungs, and changes to sense of smell and taste. Over time, people may develop shortness of breath, have trouble breathing or catching their breath, or become winded more easily while walking, using the stairs, or exercising," Dr. Mieses says.

"Vaping also makes people more susceptible to lung infections like pneumonia. Long-term effects of inhaling these chemicals can include permanent damage to the lung tissue itself, resulting in diseases like chronic obstructive pulmonary disease (COPD) and [potentially] even cancer of the mouth, throat, and lungs."

If you do use e-cigarettes, both Dr. Mieses and Dr. Sonpal recommend quitting. Quitting nicotine is difficult. (Trust me — I know firsthand.) If you are ready to stop, Dr. Sonpal says hypnosis, acupuncture, and nicotine patches can help. Dr. Mieses says you can also talk to your doctor to work out a smoking or vaping cessation plan that's best for you.

Correction: This article has been updated from its original version to correct Dr. Mieses' attribution.

More like this
How Ovulation Affects Your Sense Of Smell, Libido, & More
By JR Thorpe and Lexi Inks
4 Zodiac Signs That Will Take Forever To Admit They Like You
By Kristine Fellizar
An Expert Weighs In On The Viral Raw Carrot Salad Trend
By Alexis Morillo
10 Primal Movement Exercises That'll Improve Your Mobility
By Carolyn Steber
Get Even More From Bustle — Sign Up For The Newsletter
From hair trends to relationship advice, our daily newsletter has everything you need to sound like a person who’s on TikTok, even if you aren’t.