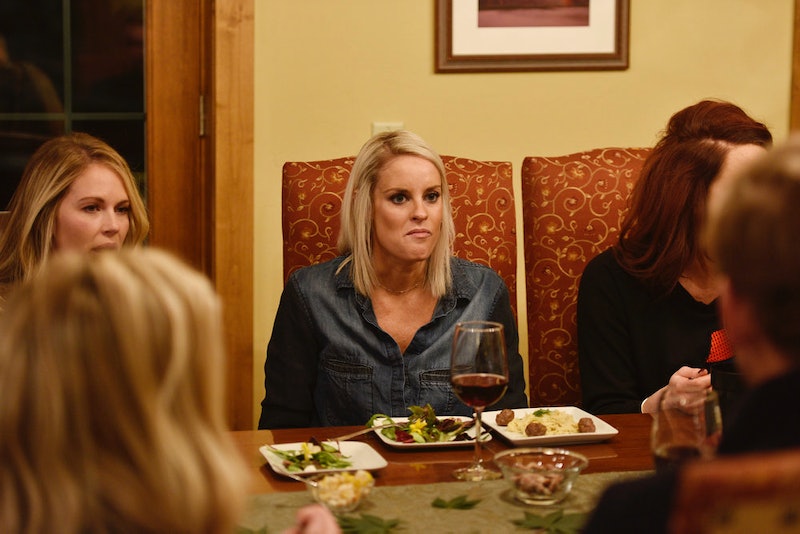 No one is perfect, and at times, we’ve probably all said stupid things that hurt other people in the name of making a point or trying to get one up on someone. (Right?) That’s what just happened with Madison and Danni on Southern Charm — Madison was trying to put down Shep, who has been bullying her and calling her names because of her relationship with Austen, but instead of taking aim at just Shep, she brought Danni into the crossfire, too. The scene was hard to watch, but since reality TV moves so fast, is there a chance that Madison and Danni are friends on Southern Charm? These two really weren’t besties to begin with, so… maybe not.

No jury having watched Southern Charm Season 6 would convict Madison at this point if she snapped and attacked Shep because he has been so awful to her. Shep has demonstrated that he thinks he is better than Madison because he does not have to work for a living (basically everyone else on the show does, so how does he have friends?), and Madison, wanting to zing Shep, told him that she heard that Shep transmitted an STI to Danni when they were dating. No one should be shamed or attacked for having an STI, so it was pretty nasty that Madison would hurl that as an insult to begin with, but it also wasn't Madison’s secret to tell. Austen had confided in her and Danni was hurt and embarrassed in the process.

Even though Danni really had nothing to do with Madison and Shep's argument.

Madison later went to Kathryn, Danni’s BFF, for help in mending fences, and while we haven’t seen how that goes just yet, it doesn’t seem like Danni is over it. She recently told Bravo’s The Daily Dish that she thinks that Madison targeted her in the verbal attack and she maintains that all of it is simply untrue. "What Madison said was very hurtful and untrue, and I feel as though it was clearly calculated, both directed at Shep and to me," she said. She added that she thinks that Madison was still resentful that Danni had inadvertently caused Austen and Madison to break up after she revealed that Madison had sent DMs to Danni’s boyfriend.

"I think she had harbored that, and I had no idea. I mean, I had actually done everything I could possibly do to kind of protect her in that situation,” Danni said. She mentioned that she had barely seen Madison and Austen since filming and that she was still working through her “betrayal” over the whole incident.

Madison hasn’t said a thing about the whole affair, which means that she doesn’t care or that she’s so embarrassed by it all that she’s just not commenting. What’s complicated is that Danni is besties with Kathryn, but Kathryn was just recently seen traveling to New York City with Madison — are they best pals now, too?

Is this OK for all parties? Madison and Danni seem to be keeping their distance with each other right now, so we just have to wait until the Southern Charm Season 6 reunion to watch it all get hashed out one more time. It’s going to be a doozy.

More like this
Dorothy Wang & Morgan Stewart Were The Ultimate BFFs On 'RKOBH'
By Sophie McEvoy
'RHOSLC’s Heather & Whitney Are Still On A “Friendship Break” After Season 3 Reunion
By Jake Viswanath
Erika Jayne's Estranged Husband Tom Girardi Has Been Indicted On Fraud Charges
By Jake Viswanath
Everything To Know About A Potential 'RHODubai' Season 2
By Kadin Burnett and Brad Witter
Get Even More From Bustle — Sign Up For The Newsletter
From hair trends to relationship advice, our daily newsletter has everything you need to sound like a person who’s on TikTok, even if you aren’t.