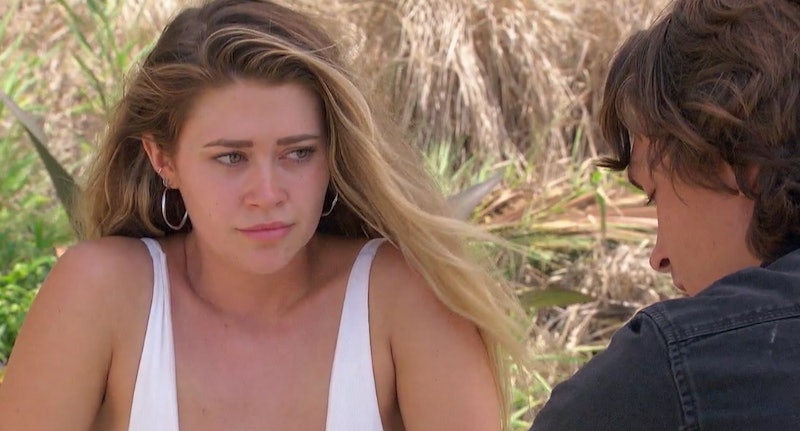 The rollercoaster better known as Bachelor in Paradise is really throwing Caelynn-Dean shippers for a loop. On July 15 (which in BiP time, was forever ago), an anonymous source claimed to People that Dean and Caelynn are dating after BiP. There are only two episodes left of Season 6, and they are... pretty decidedly not together. Like, Dean left the show not together. But now that he's returned to win her back, it's looking more likely that that source was right.

When the July report was published, no one knew that Dean and Caelynn would break up mid-season, that Dean would tell her their lifestyles could never match up, and that being his girlfriend would be "miserable" for her. No one knew that he would end up leaving for a period of time, during which Caelynn would develop a connection with late-arrival Connor, and then come back and change his mind. To think that they overcame all that back-and-forth in a matter of months and are perfectly happy now seems a bit ambitious, but their social media suggests that is, indeed, what happened.

Dean, who has a BiP reputation of being a heartbreaker, returned to Paradise to tell Caelynn that after he went home (to his van), he couldn't stop thinking about her. So, he asked her to drop everything in Paradise — including her budding relationship with Connor — and leave the beach with him. This obviously left Caelynn confused and conflicted, because she once had very strong feelings for Dean. She thought she was ready to move on with Connor, but she immediately started having second thoughts. And his big gesture seems to have worked.

In addition to the July report from People, both Dean and Caelynn shared photos from Spain during the same weekend, which means they could've been traveling together.

Since then, there have been even more clues that Caelynn and Dean are a couple. On Aug. 13, she posted a photo on Instagram with the caption, "Love is in the air (amongst other things...)" which Dean liked within minutes despite the fact that he's not actually following her. So he's either a stalker, or he knew the post was coming and was perhaps even with her when she shared it.

On Aug. 20, Caelynn also posted a couple of photos of her with Dean from Paradise. In the first one, they were leaning in for a kiss. In the second, she had a shocked expression. "When he's cute but you still have to question his hygiene.." she captioned the picture. On Aug. 26, she shared a photo of them actually kissing. "A rare moment where Paradise actually felt like paradise," she wrote. Notably, she hasn't posted any photos of her and Connor.

If things didn't ultimately end well with Caelynn and Dean, she probably wouldn't publicly reminisce about their love story on Instagram. Most people don't share photos of their exes that often, and while she could be the exception, there's a good chance that she's not. It's more likely that she's super excited about her relationship with Dean and is having a hard time containing it. Knowing that the fan base is onto them, she's probably just feeding the fire that Paradise ignited.

Update: After Caelynn chose to leave with Dean on the Sept. 9 episode of Bachelor in Paradise, she posted another Instagram that yet again hinted she's still with him. "They say you don't know a good thing till it's gone... I think it's time to bring the mustache back @deanie_babies," she captioned a series of photos of them kissing and looking cozy.

Suffice it to say, they seem to still be going strong.