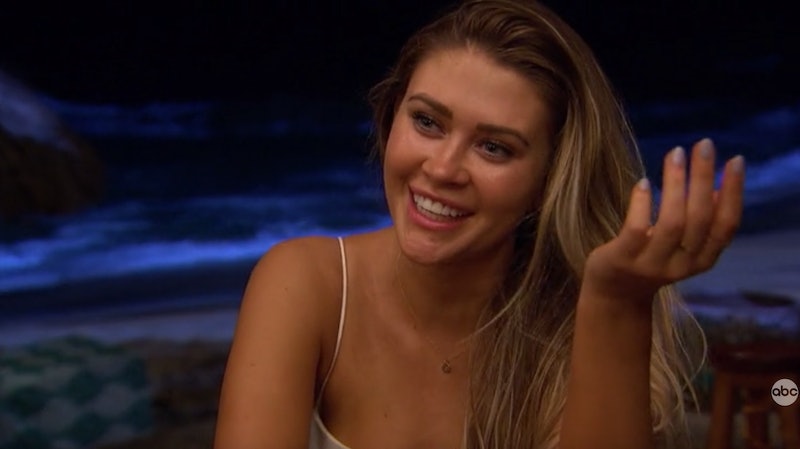 The show is called Bachelor in Paradise, but the first two episodes of Season 6 have been anything but "paradise" for cast member Caelynn Miller-Keyes. Things turned around during Episode 3 when Caelynn had a date with Mike Johnson. Now, it seems like Caelynn's new Instagram photo hints that she and Dean find love on Bachelor in Paradise.

On Aug. 13, Caelynn shared a solo photo and teased "Love is in the air (amongst other things...)." Among those other things? Caelynn didn't actually say, but she did include a rose emoji in her caption, which makes perfect sense since this is the Bachelor franchise. She also put a palm tree emoji, which is, again, logical.

Dean "liked" this post Caelynn shared about "love in the air" pretty much immediately — within the first minute it was posted. Oh, and he doesn't even follow her on Instagram. Clearly, he went out of the way to double tap that post. Could he be trying to prevent spoilers by keeping a distance from her on social media? Maybe. Maybe he was just with her when she posted it since they are probably dating. Caelynn also "liked" a post on the Bachelor in Paradise Instagram account with a video about Dean's return.

Caelynn got her first rose from Cam, but let's be honest, those two did not have off the charts chemistry. In contrast, Caelynn's one-on-one with Mike was full of sparks. And it seems like there's a third contender for that rose from Caelynn during the next new episode.

Three-time franchise veteran Dean Unglert returns to the beach, this time with a very prominent mustache. Will his fourth time on reality TV be the charm? It just might be. In a trailer for the season, contestant Jordan Kimball remarked, "Dean's mustache swept Caelynn off her feet." Maybe love really is in the air, which really wouldn't be too surprising since there have been plenty of idications outside of the show that hint they are together.

Not only that, but Dean went in on Blake Horstmann during textgate last week. Long story short, Caelynn's former flame Blake leaked their private texts in his Instagram Story on Aug. 6. That same night, Dean tweeted, "a ‘public figure’ sharing private text messages in an attempt to salvage whatever is left of their fragile ego...." He is obviously not #TeamBlake, but maybe that's because he's currently dating (or engaged to) Caelynn.

Dean followed up with another tweet, writing, "calling it childish would be disrespectful to children everywhere." Ouch.

That same night, Dean also called Nick Viall a wise man after Nick shared his take on the leaked texts.

The Bachelor alum Bekah Martinez interpreted Dean's tweets against Blake as a spoiler that he ends up with Caelynn, which does seem likely since Dean took up for Caelynn again in the wake of textgate.

In a discussion with Ben Higgins on The Ben & Ashley I Almost Famous Podcast, Dean said, "Caelynn's parents, her sisters, and her friends are gonna have to see these messages ... Publishing and publicizing private text messages without the consent of the other person as a public figure is one of the most disgraceful things I think that you can possibly do."

In that same conversation, he also acknowledged Caelynn's faults in the situation. He said, "I'm not defending Caelynn here. Caelynn made a lot of mistakes. Judging based on what we saw on the show, she does not come across in the best light." Ultimately, Dean concluded, "It's hard to defend either of them" when it comes to their interactions on the show. Even so, most of Dean's comments were very much against Blake's recent social media activities.

Caelynn teased that love is in the air on Bachelor in Paradise and most signs point to Dean... and that mustache.