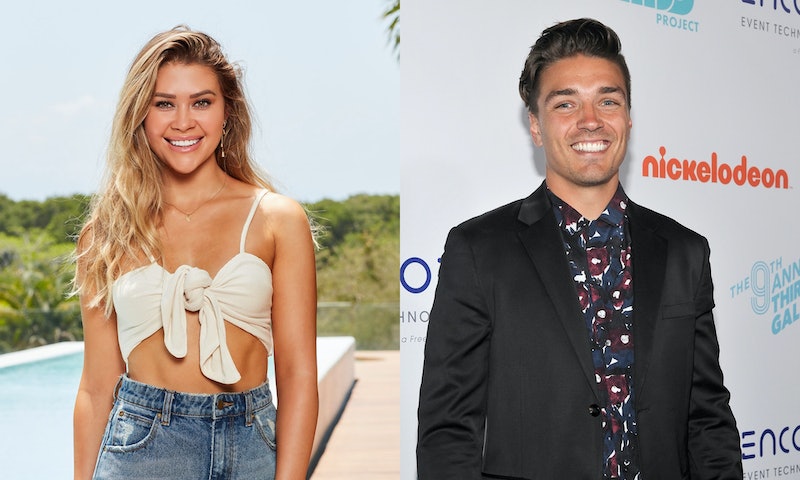 If you watched Caelynn's sweet one-on-one date with Mike during Monday night's Bachelor In Paradise, the thought that Caelynn and Dean could be dating after BiP may have never even crossed your mind. But if you keep up with the contestants on social media, you're probably onto the real possibility that they are. Dean hasn't arrived in Paradise just yet, but when he does, it could really turn things around for Caelynn.

On July 15, both People and E! News published reports claiming Dean and Caelynn are now together. Though neither Dean or Caelynn have confirmed that (probably because contractually, they can't), E!'s source claimed the pair traveled to Spain and Italy together after Paradise filming wrapped — and, well, they did both post Instagram photos that seem to back that up.

On July 10, Caelynn posted a photo (that someone else had to have taken) from Barcelona, Spain. "Clearly hating my time in Spain," she wrote. On July 11, Dean shared a video from Embalse de Yesa, a beautiful blue lake that's also in Spain. Fans immediately caught onto their close proximity and flooded their comments with speculation.

"How was the vacay with Deanie babies?" one commenter wrote on Caelynn's post. Another asked, "Is Dean behind the camera?" When someone suggested that Caelynn filmed Dean's video, he was quick to give credit to the actual videographer in the comments.

"They both went to Paradise and really hit it off there, but then Dean got cold feet and left," an insider told People. "He got home and realized he really had feelings for Caelynn, so went back to Paradise for a second chance." The source added: "Things have been going much better between them since they left Mexico together."

That was before the drama between Blake and Caelynn spilled offscreen. While in Paradise, Blake and Caelynn found themselves in an emotional argument about their past, each clearly having different interpretations of what their relationship was. In an effort to defend his character and clear the air about what actually happened, Blake posted private texts between him Caelynn on Instagram.

He deleted the texts a few hours later, but the damage had already been done, and Dean was vocal about how he felt about it. "What really crossed the line for me was [Blake] took private text messages between him and another girl, who did not consent to him releasing these text messages, and blasted them publicly for his 600,000 followers," Dean said on Ashley I. and Ben Higgins' Almost Famous podcast.

He added that Blake's decision to share the texts was the worst way to handle the situation, in his opinion, and he defended Caelynn. "Publishing and publicizing private text messages without the consent of the other person, as a public figure, is one of the most disgraceful things I think you could possibly do," he said. "I think it's almost equivalent to sharing someone's nudes."

Dean also tweeted about the texts:

He obviously cares for Caelynn, whether as a friend or something more. However, a source claimed to E! News that the "Blake situation has put huge amount of stress on their relationship" and that, "Things are very tense between them. Caelynn is having a really hard time with it ... They are hopeful things will blow over and they can get back to where they were before the texts were exposed."

It's unclear whether or not that will be enough to drive them apart (if they even are together), but fans will have to wait until Paradise comes to an end to find out for sure. Who knows what will happen online between now and then. For their sake, hopefully not much.