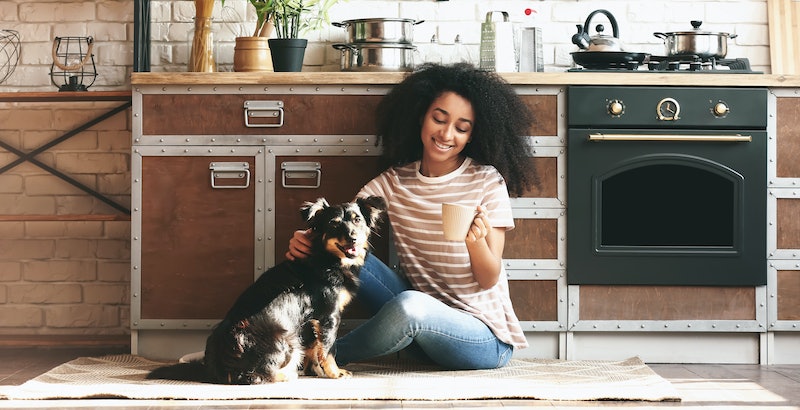 Pixel-Shot/Shutterstock
By Emma Madden
May 31, 2019

Besides their adorability factor, plenty of dog owners attest to the many benefits of owning a pup. Whether that's coming home to someone who's very, very excited to see you everyday, or having someone to seriously relieve your anxiety, I'm happy to stand by the claim that dogs really can improve your quality of life. Especially since science continues to prove it. Most recently, a report has been circulating that suggests dog owners are fitter than people without a dog in their life. So, if you own a dog, it's time to raise the woof in celebration (sorry).

"Dog ownership is of public health interest due to the potential to promote health-enhancing physical activity ... and improved cardiovascular outcomes. Evidence suggests dog ownership is associated with lower risk of death, and a lower risk of cardiovascular conditions at least in single-person households, where the participant may be more highly obligated to dog walk."

For the study, the researchers had the supreme pleasure of meeting with 191 dog owning adults (that's at least 191 dogs! How can I get this job?!) across West Cheshire from July to August 2015, to test their hypothesis.

They also met with 455 non-dog owning adults across the same region, and the researcher's results revealed that, of these groups, adults with a dog were more likely to meet the UK's recommended physical activity guidelines, as outlined by the Chief Medical Office. According to gov.uk, for adults between 19 and 64, daily activity is very much encouraged. More specifically, it's recommended that you spend at least 150 minutes of your week engaged in a physical activity. "One way to approach this is to do 30 minutes on at least 5 days a week," they write. Doing so "reduces risk of a range of diseases," "helps maintain a healthy weight," and "reduces symptoms of depression and anxiety," gov.uk states, among other benefits. However, according to the study published in Nature, these guidelines are achieved by only 66 percent of men and 58 percent of women in the England. But what do figures look like among dog owners versus non-dog owners?

Carri Westgarth, a lecturer in human-animal interaction at the University of Liverpool and the person who led the Nature study, spoke to the New York Times about her team's findings. Westgarth told the newspaper that it quickly became apparent that dog owners walked far more often than non-dog owners. And later she says the research suggests dog owners are more physically active in general.

A quote from Westgarth at the end of the newspaper's report reads: "A dog is not a tool just to make us more physically active ... But if you feel that you have the time, inclination, and finances to take on the responsibility of having a dog, they are a great motivator to get out walking when you otherwise would have made excuses not to."