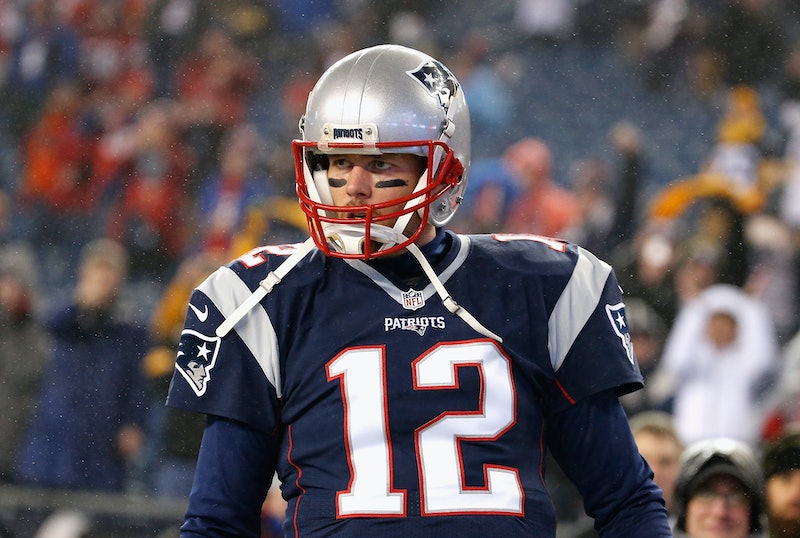 While the worlds of politics and sports are usually kept separate from each other, overlap is sometimes simply unavoidable. Now that Super Bowl LI is just around the corner, a lot of people have been speculating on whether or not Donald Trump and Tom Brady are friends. On Feb. 5, Brady will be playing as the quarterback of the New England Patriots against the Atlanta Falcons. While die-hard fans of the Pats will never waiver in their support, it's hard not to wonder about the relationship between the president of the United States and one of the most famous (and, at times, controversial) quarterbacks in football history.

For the past few months, Brady has gotten more than just a few questions about his thoughts on Trump, whose lack of experience in politics and history of upsetting world leaders and marginalized communities alike have made him one of the most controversial presidents yet. Now, I'm a huge supporter of the New England Patriots; as a kid, I spent seven years living in Boston, Massachusetts, and found myself rooting for the Pats (and the Red Sox!) long before I even knew what the point of the football was. Now, however, knowing that Brady might be carrying on a bromance with Donald Trump has left me (and other Pats fans) uncertain about how to support a player who is on good terms with someone with whom I disagree so heavily.

Although Brady and Trump obviously don't spend several hours a day talking on the phone like besties (one is too busy practicing football, the other is too busy writing executive orders left and right), there is still quite a bit of evidence that the two have some sort of a relationship going. For instance, all throughout Trump's campaign for president, there was speculation about whether or not Brady was a fan of "making America great again." Sure enough, a photo of a red hat with Trump's signature slogan in Brady's locker surfaced. "A nice keepsake," Brady had called it.

At a New Hampshire rally in early November, the then-Republican nominee boasted about Brady's support for him. He even said Brady was a "great friend of mine" and that the quarterback had called to let him know that he'd voted for him because they were friends. On the same day, however, Brady insisted that he had not cast a vote for president yet.

That being said, Brady has given similar comments about his relationship with Trump, calling him a "good friend of mine" and saying he "always enjoyed [Trump's] company." According to Brady, Trump has invited him to play golf in the past and he even judged one of Trump's beauty pageants. According to reports, Brady also called Trump to congratulate him on his inauguration. That should tell you something about the bond between Brady and Trump, if nothing else does.

There is still some reason to think otherwise, however. At one point, model Gisele Bündchen — to whom Brady is married — got a question from one her Instagram followers about whether or not she and Brady were supporters of Donald Trump. Bündchen replied with a passionate "NO!" It's unclear whether she was responding for herself only or if she was counting Brady in that response, too. She has also publicly praised the Women's March, in which millions of people protested peacefully against Trump's presidency the day after he was sworn into office.

Although they appear friendly, the exact nature of Brady and Trump's relationship remains somewhat unclear. As we approach Super Bowl Sunday, I'm curious about one thing: If Trump weren't president of the United States and didn't have a list of presidential things to do, would we see him sitting in the Super Bowl stadium? One can only guess.