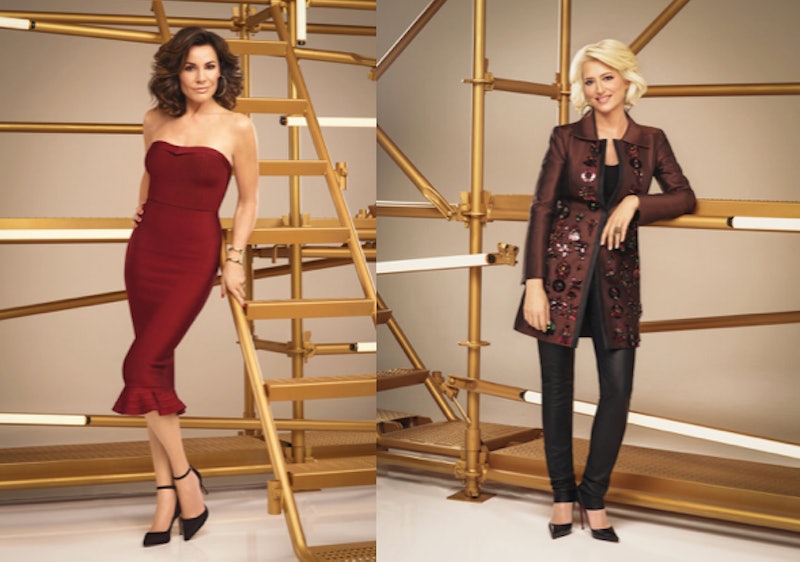 When Dorinda joined the cast of Real Housewives Of New York, she and Luann were really great friends. They understood each other. They liked each other. It seemed pretty easy. But as they say, nothing gold can stay, and there’s one word that completely fractured this blissful friendship — Jovani. After a raucous night at the Countess' cabaret last season, it looks like Dorinda and Luann aren't friends in RHONY Season 11. A few dresses may have spelled the end of a relationship.

Of course, it’s never just about the dresses. Luann and Dorinda’s relationship started to fracture on a Season 10 trip to Cartagena, Colombia. The women weren’t having the best time to begin with because it wasn’t the luxurious, butler-driven stay that many of them prefer (ahem, Ramona), but they were making the best of it. Until Dorinda started drinking and then Luann said something about it. That led to Dorinda calling Luann out for her own drinking. For those of you who don’t remember, Luann was arrested in December 2017 for being allegedly drunk and disorderly while in Palm Beach, Florida. (She later avoided jail time in exchange for a plea deal).

Luann always lands on her feet, though — she has a cabaret act now! And during one such act, Dorinda started screaming “Jovani, Jovani,” which is the name of the place where Luann got all her outfits from. Dorinda got her in, and Dorinda was (again) drunk and wanted recognition. After, Luann missed the Real Housewives Of New York Season 10 reunion because she was back in rehab, which Dorinda alleged was “court-ordered.” And this is how a friendship fails. Three stupid comments and two women determined to not own up to their own actions and apologize for being mean and unforgiving to each other.

As of September 2018, according to People, Luann said at one of her #CountessAndFriends shows that she was still hurt by what Dorinda said. “What she said hurts still. I’m just trying to process it and get over it right now,” Luann told the crowd. “I’m not ready to take the Band-Aid off. I’m still scarred from it.” That doesn’t mean Luann doesn’t see a make up moment with Dorinda in the future, though. “I do [want to make up with her]. I love Dorinda,” she said. “We’ve known each other for a long time. I’m sure we’ll come to a good decision.”

As of now, it doesn’t seem like these two are even really talking. They’re not on each other’s social media accounts, which is strange, because Dorinda has shots with Teresa from Real Housewives Of New Jersey and Luann is taking pictures with Ramona Singer and Jill Zarin. Dorinda and Luann are making it obvious that they’re avoiding each other, so I guess Bravo fans of Real Housewives Of New York will have to wait until Season 11 starts to see if these two feuding friends can clear the air.