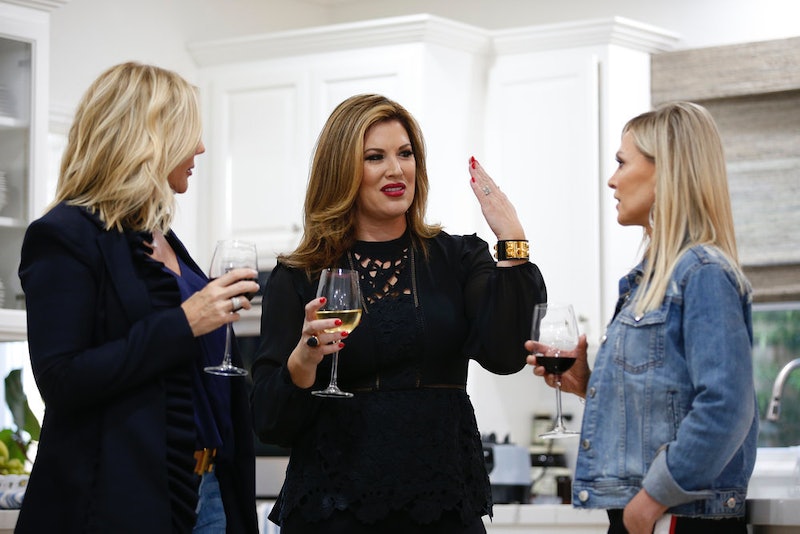 Being on TV means that you have adoring fans and the potential for fame, but it also means that everything you do is out there for everyone in the world to critique. That's best seen these days through Emily and Shane Simpson's relationship on Real Housewives Of Orange County, which appears to be struggling. At the very least, fans of the show are worried enough to wonder if Shane and Emily are together after this season of RHOC. It seems like everything about their marriage is strained at the moment.

The climax of Emily and Shane's struggles so far was when Shane took two weeks away from his family to study for the California bar exam to be a lawyer. (He reportedly failed, by the way.) He didn't show up to his parents' birthday party, he whined a lot, snapped at Emily over and over again, and left her in charge of all the childcare and household stuff for weeks. This was obviously a growing problem — it wasn't just the bar exam — but some of their issues came to a head the more stressed he became about the exam. When she suggested marriage therapy, he basically laughed at her, but called his bad attitude "satire," further provoking hate from fans.

It's not just fans. Emily told TooFab early in September, "[It] was a rough time for me to go into filming because there was a lot going on between me and Shane and a lot of stress with him studying for the bar and not being around, and then me trying to take care of three little kids. And I was working at that time, too. So logistically, I knew what I was getting into, but emotionally and physically, it was more draining."

She added that this season is hard to watch for her. "I obviously know what's going on in the episodes just because Shane watches them, my sister watches them. I'm on social media, so I see clips and I see people talking about it, but it almost makes me nauseous to watch it. It's not easy. So sometimes it's just easier for me to just separate myself from it completely. It's hard, it really is," she said.

Emily seemed to defend Shane more back when she first started on Real Housewives Of Orange County, telling Andy Cohen last year on Watch What Happens Live that Shane was "totally committed" to their family and imploring the masses to "give him a break." In November 2018, Emily told Decider that Shane had never gotten into a fight with any one of her girlfriends before (like he did with Gina in Season 13), and that he was always around and talks to everyone. "Everybody likes him, he chit-chats a little bit and goes on his way," she said.

She's doing that less these days, which could mean that she and Shane are no longer together or simply going through a rough point in their marriage. After 10 years of being together, that's understandable. Emily's Instagram captions and silence could mean that she and Shane have reconciled and part of that means staying private or that something else is up with them. She wouldn't be the first Housewife to struggle onscreen with her marriage and she definitely won't be the last. But that doesn't mean fans won't be calling Shane out for the rest of the season anyway.

More like this
Everything To Know About 'The Real Housewives Ultimate Girls Trip' Season 4
By Jake Viswanath
Everything To Know About 'RHONJ' Season 13
By Brad Witter and Jake Viswanath
Andy Cohen Apologized To Larsa Pippen After A 'RHOM' Season 5 Reunion Dust-Up
By Brad Witter
'RHOP' Stars Robyn & Juan Reportedly Got Remarried & Filmed The Ceremony
By Brad Witter
Get Even More From Bustle — Sign Up For The Newsletter
From hair trends to relationship advice, our daily newsletter has everything you need to sound like a person who’s on TikTok, even if you aren’t.