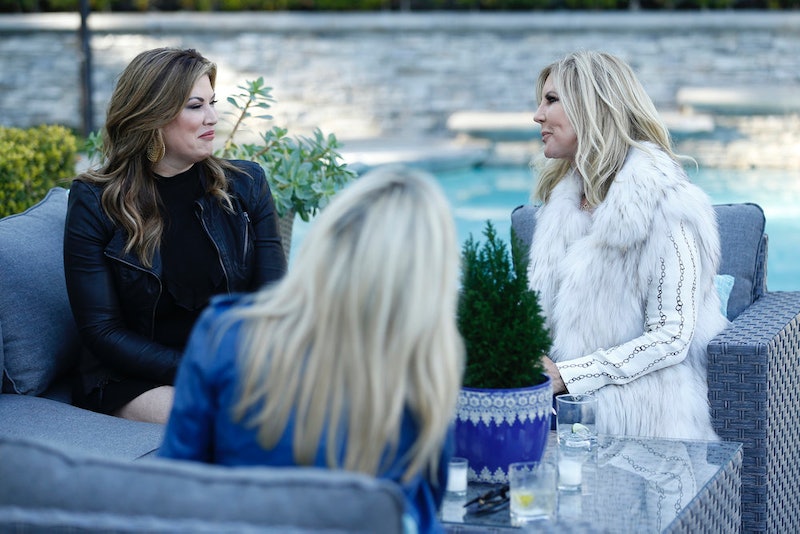 It depends on the franchise, but so many of the cast members of the Real Housewives series are separated, divorced, or just plain split up because it's really, really stressful to be married and be on TV. Your problems are all laid bare there, for the world to see, which is what seems to be happening with Emily and Shane right now on RHOC because he's studying for the bar exam and has been less than kind to his wife in front of the cameras. Hopefully, we find out if Shane passed the bar on Real Housewives Of Orange County soon, because if Emily has to go through this again, she may not take it so graciously.

Radar Online reports that "several sources" confirmed that Shane did not pass the bar when he took it in February 2019. The show hasn't outright said that that's when Shane took the test, but considering that so much of what we've seen from Real Housewives Of Orange County so far this season has been around Valentine's Day, it's safe to assume that the studying marathon Shane subjected himself to was probably in February.

Shane shouldn't feel too badly, though, because according to the State Bar Of California, only about a third of those who took the exam actually passed — it's not an easy test at all! And that third was actually better than the amount of people who passed it the time before that.

According to OK!, both Shane and Emily have remained mum on whether or not Shane passed the bar exam after all that studying, but Shane's name does not come up when searched in the records that California keeps of all of its licensed attorneys. (For the record, Emily's does. She's been a practicing attorney since 2005.) There were also California bar exams in June and July, so it's possible that maybe Shane took one of those after filming and passed there, but the results haven't been filed yet. The only way we're really going to know is if it's in the records from the state of California or if the Simpson family confirms it themselves, and neither of those things have happened just yet.

Let's hope, though, that Shane passes or has passed already, because he is not a very nice person when he's in full-on study mode. So far this season, we've seen him skip his parents' birthday party and be mean to Emily, who has been working and raising his children while Shane's been holed up in a hotel studying. He doesn't even manage a thank you — instead, Shane claims Emily is harassing him. Dude, we know it's stressful, but why take it out on the people that love you? Not cool.

Recently, Emily told Shane that she feels "upset and resentful" toward him, and she knows he feels the same. She wants to see a therapist, and hopefully, Shane will agree to it. Look — marriage is hard, and it's not up to the world to judge Shane and Emily's relationship. The best that they can do is continue to choose to love each other... and maybe get Shane a tutor for the next bar exam.