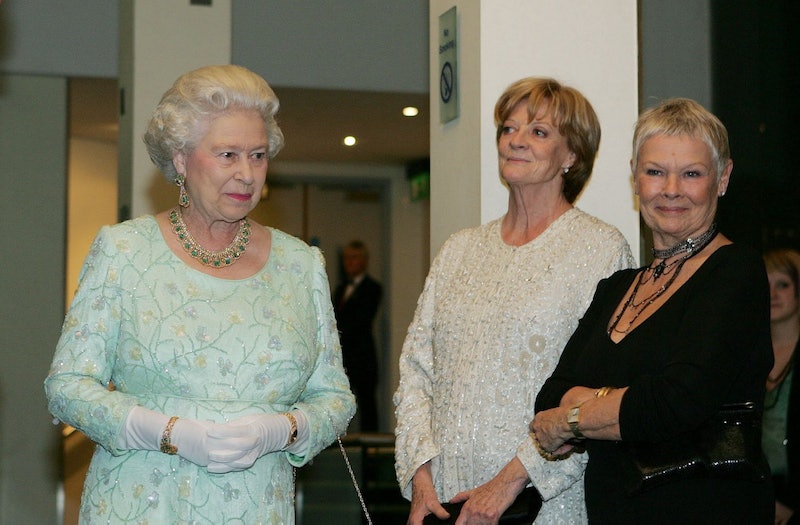 Britain has birthed some of the greatest actors in modern times. Often climbing to absolutely astronomical heights and seemingly never retiring. I mean I hope they never retire, what the hell would we do without them?! The likes of Dame Judi Dench, who kills every single role she takes on. And Maggie Smith, who does side eye better than anybody ever has or perhaps ever will. But hey, guys, do you reckon Judi Dench and Maggie Smith friends IRL? Because that would melt my heart in *all* kinds of ways.

You'll be glad to hear that the pair are friends. I know right?! And total squad goals to top it off. I mean, the amount of goss alone that those women share must be insane. Talk about behind the velvet curtain, am I right?

The pair appeared alongside two other acting legends Joan Plowright and Eileen Atkins in a documentary called Tea With The Dames in which they recount lots of their old stories from back in the day. Seemingly the whole bunch of them meet up on the regs, but this time they allowed it to be filmed. I know, I am also shook by this whole thing. Yes it's lovie AF but they are so funny and their laughs are the most infectious thing I have ever heard.

Both Dench and Smith started out on the stage and, in Tea With The Dames, they discuss that neither ever thought that they would end up as superstars. But boy oh boy were they wrong. However, despite their legendary status, they have never lost their senses of humour. Fellow actor Plowright, who also features in the film, said to Smith: "I remember you Mags, saying you had been discovered and rediscovered." To which she hilariously replies: "Nah I'm still hanging in for that."

And thank goodness for that. The pair have had an utterly sparkling career that has spanned actual decades. With each playing iconic roles that will stay etched in our minds for eternity.

So, hey, how about like, actual Professor Minerva McGonagall? Wow that woman knew how to live. I mean come on. The perfect level of stern but also a good person. With the best one liners and severe glares in the business. Or, hey, how about the Dowager Countess? By far the best part of Downton Abbey. Her incredible levels of sass, not taking BS, and of course frisky history with the White Russians. Too flipping much guys. She is an icon. Luckily for fans of the show, it has been confirmed that she will appear in the movie. I am not being funny but if Julian Fellowes kills her off, I will be so pissed.

Dench of course has become super identifiable in lots of films. OK so like, how about M in the Bond films? I am sorry but it's fairly difficult to imagine anyone else playing the character. Or how about Queen Victoria? I mean like who the hell else can manage that? She basically is the monarch.

One thing for sure is that the two of them are icons of the stage, screen, and, as it turns out, friendship too. All we have to do now is try and get invited to one of their meet ups.