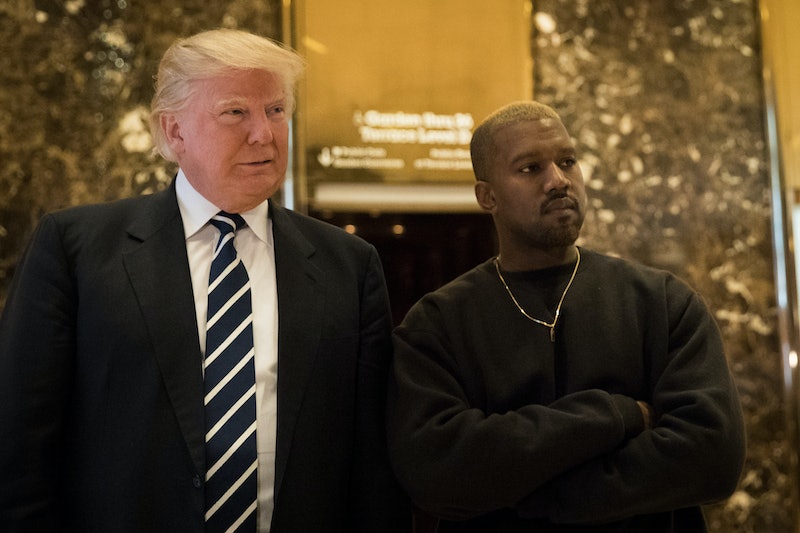 According to The Daily Beast, President Trump may invite Kanye West to the White House for dinner. West fully came out in support of Trump earlier in the week, explaining that both of them have "dragon energy," and the president has had nothing but kind things to say about the Grammy-winning rapper since then.

Many were caught off-guard when West tweeted on Wednesday that "you don't have to agree with trump [sic] but the mob can't make me not love him." West went on to call Trump "my brother," and later sent a picture of a Make America Great Again hat ostensibly signed by the president. West's reference to the so-called "dragon energy" that the two men supposedly share sparked endless memes, speculation, and confusion.

Trump, despite calling for a boycott of West back in 2009, quickly became a fan once it became clear that West likes him. In a rambling interview on Fox & Friends Thursday, Trump said that West "has good taste" and "is smart" for supporting him. The president went on to question why black Americans vote for Democrats, sputtering that "if you go back to the Civil War, it was the Republicans that really did the thing," an apparent reference to the abolishment of slavery.

Now, two sources tell The Daily Beast that Trump has offhandedly suggested that he might invite West to a White House dinner.

In fact, West's support for Trump isn't a new thing. Shortly after the 2016 election, he announced during a concert that he would have voted for Trump if he'd voted. The next month, he visited Trump Tower and posed for pictures with the president-elect. West's official announcement that he's in the president's camp was a mere formality.

After West's tweets, Trump touted his support among black voters, although that support is in fact quite limited. In the Fox & Friends interview, the president boasted that even though pre-election forecasts said he wouldn't receive many black votes, he "got a lot!"

"I got a lot of support!" Trump claimed. "I should have gotten much more."

In actuality, only 8 percent of black voters cast a ballot for Trump in 2016, according to the Roper Center for Public Opinion Research. A Gallup poll taken at the end of 2017 found that a mere 9 percent of black Americans approve of Trump's job as president so far.

Nevertheless, Trump appears to be under the belief that West's support for him represents a sort of sea change in the voting patterns of black Americans, who have historically supported Democrats.

"Kanye West has performed a great service to the Black Community - Big things are happening and eyes are being opened for the first time in Decades - Legacy Stuff!" Trump tweeted on Friday.

Trump theorized on Fox & Friends that West supports him because he "sees black unemployment at the lowest it’s been in the history of our country." It's true that black unemployment is at an historic low — but this was the case before Trump took office as well. In actuality, black unemployment began plummeting steadily around the end of Barack Obama's second term, and the trend hasn't reversed itself since.

The same day that West sent his pro-Trump tweets, Chance The Rapper tweeted simply that "Black people don't have to be democrats." This, too, elicited a thank-you from Trump — a thank-you that Chance immediately rejected.

"I'd never support anyone who has made a career out of hatred, racism and discrimination," Chance, who, like West, is from Chicago, said in a statement Friday. He went on to explain that his tweet about black people voting for Democrats "stemmed from a personal issue with the fact that Chicago has had generations of Democratic officials with no investment or regard for black schools, neighborhood or black lives," and that he had sent the tweet as a show of solidarity with West, with whom he's personal and professional friends.

"But again," Chance said, "[I] said that sh*t at the wrongest time." He added that upon reflection, it's not his job to "defend or protect" West, but to "pick up the phone and talk to him about it."

More like this
Prince William Condemns “Unacceptable” Comments Made To A Black Guest At Buckingham Palace
By Shahed Ezaydi
The David Beckham Qatar Controversy, Explained
By Sophie McEvoy
Google Wants You To Shop Black-Owned The Friday After Thanksgiving
By Dominique Norman
The 10 Memes That Defined 2022
By Alexis Morillo
Get Even More From Bustle — Sign Up For The Newsletter