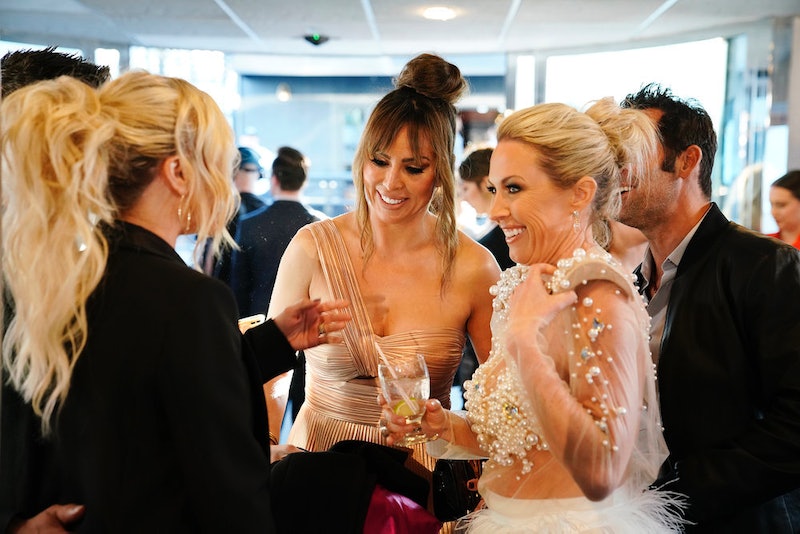 Being a Housewife can be a fickle business — at first, you’re in, and suddenly, the friends you had before have cast you aside. Braunwyn came into Real Housewives Of Orange County because she knew Kelly Dodd from the Balboa Bay Club, but now, there seems to be trouble between them. Friendships change rapidly when they’re being filmed for television, and Kelly and Braunwyn's RHOC friendship might have been challenged because of the show.

So far, Braunwyn has fit in pretty well with the women of Orange County. She’s defended Kelly every chance she could get, especially against Vicki Gunvalson, because Kelly and Vicki are still in a fight stemming from Vicki setting up Kelly’s ex-husband with a friend of hers last season. Braunwyn has been standing up for her friend, but she probably didn't think it would take virtually nothing to have the drama turned around on her. In a preview clip from Season 14, Episode 14, Braunwyn tells Emily, “I’m not used to being in a group of women where they take what you say and twist it… in a way [where you look wrong].”

Apparently, Tamra and Shannon told Kelly that Braunwyn mentioned Kelly had a fight with her then-boyfriend, Brian, and Kelly wanted to know why she mentioned it. It was kind of like those three-way calls in Mean Girls — if you’re the target, you hang up the phone feeling ambushed, and Braunwyn said she certainly felt that way.

According to Instagram account Comments By Bravo, Kelly told one of her Instagram followers that Braunwyn “goes back and forth” all season long when it comes to her allegiances, which would kind of make it seem like she and Kelly are on the outs. When Kelly believes other’s words over Braunwyn’s, who has, by the way, apparently always been good to her, that’s a problem. But then again, maybe it’s not.

Even though Kelly has been spending more time in New York City because of her boyfriend, Fox News journalist Rick Leventhal, whom she met through Ramona Singer, she is still partying in the OC, and according to her Instagram, she’s still hanging out with Braunwyn.

Braunwyn's Instagram is filled mostly with pictures of her own family (she has seven children, remember), but since she's featured on Kelly's channels, everything is probably fine between the two of them. Braunwyn and Kelly both went to bat for Braunwyn's mom, Dr. Deb, when she was hassled at Braunwyn's daughter's fashion show. They hang out all the time. They dance on tables together. Whatever drama happened between Kelly and Braunwyn for this brief moment is probably the fault of one of the other women (Tamra specifically, it seems, as more previews show the women think she's a manipulator).

And though Kelly seems to always be in a fight with another Housewife, Braunwyn seems very able to admit when she's wrong — she even told Gina after Vicki's tea party that she was right when Gina said Braunwyn makes everything about herself. It takes an immense amount of self-reflection to admit blame. So if Kelly and Braunwyn ever did have a tiff, they would apologize and move on — right now, these two sure seem solid.