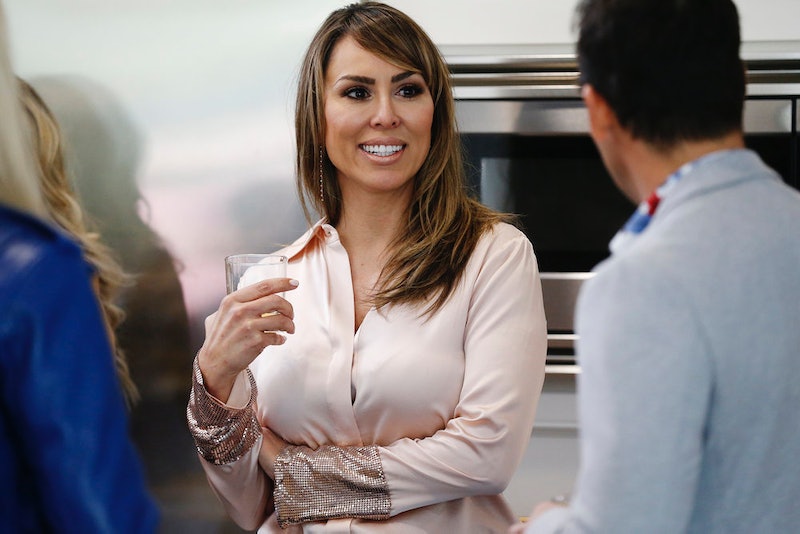 Kelly and her ex-husband, Michael, have a complicated relationship. They were married, then they split, and then they got back together. And then, most recently, they finally got divorced for good, sharing custody of their daughter, Jolie, and trying to be as good of co-parents as they could be. Kelly has always said on RHOC that Michael was always one of her best friends and that they got along better when they weren’t married, but still, it’s a blow to find out that your ex has moved on with someone else.

In Season 13, Kelly learned Michael had a new lady on his arm, and he met said lady, a different friend of Vicki’s, at a party Vicki had at her house. But then — and this is the part that Kelly blew up at — Vicki went on double dates with her now-fiancé, Steve, and Michael and his new girlfriend. Kelly thought Vicki should have told Kelly about it, Vicki disagreed, and the two haven’t gotten along since.

Whether you think that girl code was broken here or not, Kelly and Vicki are still feuding about this over a year later. In October 2018, Kelly confirmed to Entertainment Tonight that she and Vicki don’t speak. “We don’t talk at all,” she said. “As a matter of fact, I went to Tamra’s house for her birthday in September, and Tamra showed me the text [from Vicki], she’s like, ‘I’m not gonna be there if Kelly’s there.’”

In July 2019, the shade continued, with Vicki remarking on Instagram, per OK!, that she doesn’t even follow Kelly anymore on the social network. Vicki also went off in an Instagram post, saying that she “feels sorry” for Kelly and that she’s an “angry, volatile” person. Yes, these are grown women, and yes, they’re fighting on Instagram. Kelly called Vicki “a senior citizen” in an interview with People, and it all keeps going around and around.

Even though Vicki has been demoted to “friend of” on Season 14 of Real Housewives Of Orange County, she may still have queen bee status. According to an interview Kelly did with Us Weekly, she’s no longer friends with Tamra or Shannon, meaning that they may have chosen Vicki’s side in all of this infighting. “Tamra just said that she never wants to talk to me ever again. And that’s fine, because I don’t ever want to talk to her again,” Kelly said. “They just became the Tres Amigas and kind of booted me out… throughout the whole season, I felt like I was getting picked on … ganged up on. And I’m not gonna put up with it anymore.”

The lines are clearly drawn here on Real Housewives Of Orange County, which makes for good TV, but we’ll have to tune into Season 14 to see how it all really went down.

More like this
What Jen Shah's Delayed Sentencing Could Mean For The 'RHOSLC' Season 3 Reunion
By Brad Witter and Jake Viswanath
What To Know About Simon Guobadia’s 3 Ex-Wives & Children
By Brad Witter
Everything To Know About The 'Harry & Meghan' Netflix Documentary
By Jake Viswanath and El Hunt
Are Kayla and Seb From 'Too Hot To Handle' Still Together?
By Karen Fratti
Get Even More From Bustle — Sign Up For The Newsletter