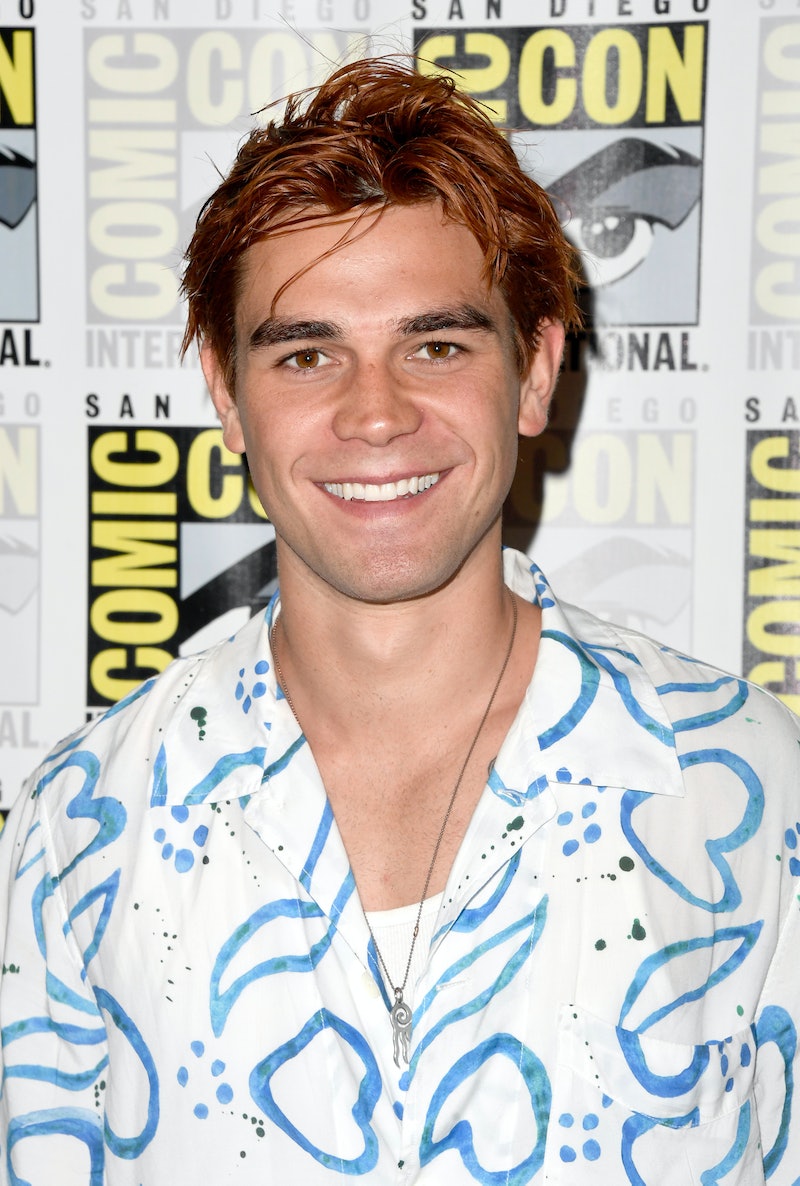 Young Hollywood may have another superstar couple on their hands. According to W Magazine, KJ Apa and Britt Robertson are sparking dating rumors, thanks to their recent reported hangout at Comic-Con in San Diego. Us Weekly, which first reported the news about the pair, had some major details about their supposedly very close get-together. (Bustle has reached out to reps for Apa and Robertson for comment, but did not receive an immediate response.)

Us Weekly reported that on Saturday, July 20, Apa and Robertson were seen getting close at Entertainment Weekly's Comic-Con party. An onlooker who was supposedly at the party told the publication that the Riverdale star was holding hands with the For the People actor during the event and that he could be seen “hugging her." The source also claimed that the two, who spent some time with Apa's Riverdale costars Camila Mendes, Lili Reinhart, and Cole Sprouse, were “leaning in and kissing each other.”

Apa and Robertson previously worked on the 2017 film A Dog's Purpose together and will soon reunite to film the sequel to 2018's I Can Only Imagine, I Still Believe, with Shania Twain, as Us Weekly reported. Additionally, the publication noted that the young actors have been liking each other's Instagram posts since April, which could either indicate that there is some spark between them or it could also be a sign that they're, you know, simply friends.

According to Us Weekly, Robertson was most recently linked to actor Graham Rogers. Prior to that relationship, she was reportedly in a relationship with Dylan O'Brien, whom she first met while filming The First Time, from 2012 to late 2018, also per Us Weekly. The publication noted that neither Robertson nor O'Brien opened up about the split, which was reported in late 2018, as they were both quite private when it came to their relationship.

While Apa has not been publicly linked to anyone in the past, he has opened up about his love life on numerous occasions. In October 2017, he told Cosmopolitan that he was waiting for the "right girl," as he really is too busy to head out into the dating scene. He said, “I think I’m just waiting for the right time, right girl. I’m pretty busy at the moment. I don’t know how much I have to offer to someone right now." Could the right moment be now (and could the right girl be Robertson)?

In April 2018, he told Seventeen that he may be looking to start dating (the publication noted that he previously said that he wasn't a year prior), as he said,

"I’ve changed for sure. But that’s all I really want to say. Well, that, and I’m really happy. The thing is, I don’t think it matters whether you’re looking for a relationship or not —it’s not for us to decide when we meet the love of our lives."

Thanks to Us Weekly's latest report, it sounds like there could very well be a budding romance between Robertson and Apa. But, since the two actors have yet to confirm that they are indeed an item, fans will simply have to speculate about their possible relationship.

More like this
Selena Gomez Confirms She's Single Amid Drew Taggart Dating Rumors
By Martha Sorren, Jake Viswanath and Jack Irvin
Who Is "Daddy" Pedro Pascal Dating? People Are Thirsting Over The 'Last Of Us' Star
By Alyssa Lapid
Michael B. Jordan Tackled His "Public Breakup" With Lori Harvey On 'SNL'
By Brad Witter
Joey Essex Is Rumoured To Be Dating A 'Love Island' Favourite
By Sam Ramsden
Get Even More From Bustle — Sign Up For The Newsletter
From hair trends to relationship advice, our daily newsletter has everything you need to sound like a person who’s on TikTok, even if you aren’t.