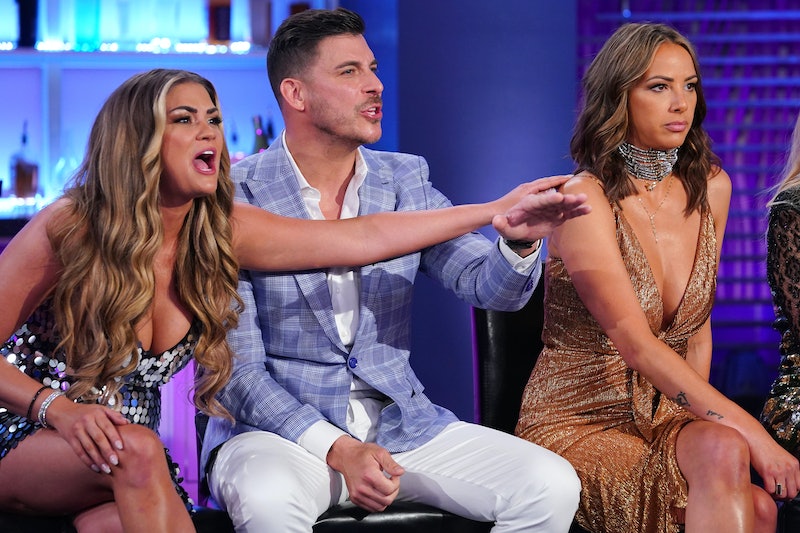 Life makes you question many things, but one thing that's remained a constant is Jax Taylor always being wrong in basically every situation on Vanderpump Rules. However, hell may have just frozen over, because during the Jan. 14 episode of Vanderpump Rules, Jax inexplicably became the voice of reason in Kristen and Carter's messy romantic drama. And yes, it's just as disorienting as it sounds.

Kristen's relationship with Carter has been a sore point for the entire Pump Rules cast since she announced during the Season 7 reunion that they were no longer together — but she was still living with him and paying their bills, which were the same problems that plagued them to begin with. This season has focused on everyone growing tired of hearing Kristen vent about Carter without doing anything to disconnect from him. The situation came to a head when Jax told Carter that he wasn't invited to his and Brittany's joint bachelor/ette party in Miami. And dear God help me, everything he said was actually right.

In his confessionals, Jax read Carter to filth, calling him out for seeing that Kristen is struggling to break up with him and trying to emotionally manipulate her by helping her move into her new house, hoping it will change her mind. While Kristen made a good point that Jax is currently on a high horse with his upcoming wedding, he's also very much correct, and I genuinely, truly can't believe I just said that.

Now that Jax has helped Kristen take the first step in disentangling herself from Carter, where do they go from here? Hopefully, it's away from each other. Based on social media, it looks like the couple actually did break up. Carter hasn't appeared on Kristen's Instagram in several months, while he last posted about Kristen in February 2019. But given what's airing on the show, it's always possible that the two are still in a weird limbo. If Carter moved into Kristen's new house after all, despite everyone around her trying to prevent it — including Jax, the long-ruling king of bad relationship decisions — we're in for a long season.