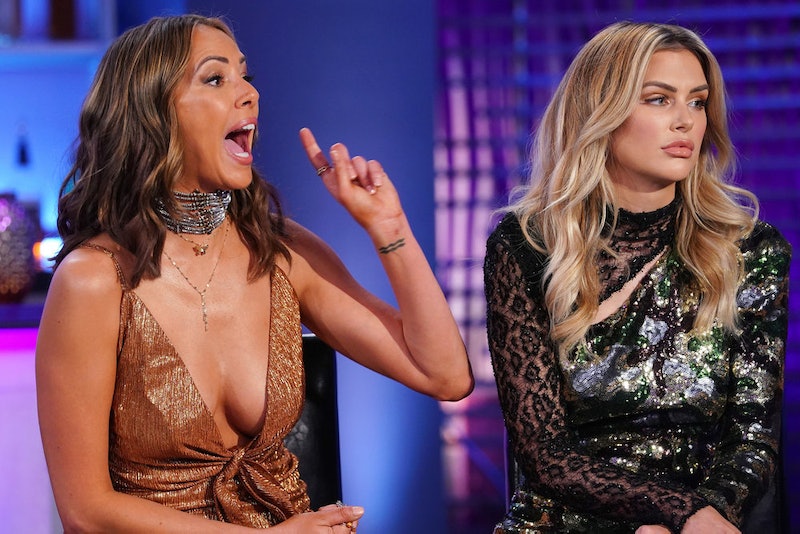 Nicole Weingart/Bravo
By Lindsay Denninger
May 14, 2019

The Vanderpump Rules Season 7 reunion has certainly taken a turn. The reunions — all 70 parts of them — are usually fraught with drama, but parts one and two of this season's get-together have been particularly venomous. Not only is everyone fighting with James, but BFFs Stassi Schroeder and Katie Maloney-Schwartz didn't even know Kristen Doute was single. Kristen and Carter broke up without anyone knowing, and now, Kristen and Carter might be back together, again without anybody knowing.

As Andy Cohen did initial interviews and hellos for the Vanderpump cast in part one of the reunion, Kristen admitted that she and longtime beau Carter had split up, and everyone did a double-take. Say what? Not one person knew about their breakup. Part two of the reunion just had Kristen yelling at and about James, but in part three, the fur seems to fly between Kristen and Katie, with Kristen insisting that Katie and the rest of the crew know nothing about her relationship, and Katie saying that Kristen and Carter are still living together and sleeping together. So thus, they are basically still dating. If it walks like a duck and talks like a duck...

Back in February, Kristen said on Watch What Happens Live that she and Carter were trying to work things out. "Honestly, I bleed out for the show. Like, I show every single second of everything... we're figuring it out [our relationship]. So we'll let you all know when we get to that place," she explained. They must have figured it out, because according to an interview she did with Page Six in May, they've since called it quits, albeit while leaving the door open to a reconciliation. "Just like every normal couple, we are experiencing ups and downs with our relationship and are working through this together … when the cameras are not rolling,” Doute told Page Six through a representative. "As we are still figuring out what the future holds for both of us, we are considering ourselves single."

Carter hasn't made an appearance on Kristen's Instagram since January, but he shared photos of Kristen on his page as recently as...five days ago. According to Page Six, the Pump Rules reunion was filmed on March 29, so if Katie's assertions that Carter and Kristen are still living together and sleeping together are true, were they ever really, truly broken up? It seems like they're still in some sort of situationship, if not full-on back together.

Even though Kristen and Carter's coupledom was the source of some drama in Season 7, it's strange that Kristen wouldn't tell her close friends about her relationship status. Everyone was floored when she said she was single. All this really goes to show is that while Kristen and Carter may technically be single, relationships are complicated, and sometimes, it's really hard to extricate yourself from a long-term relationship. Feelings get in the way of what you know you should do, and you just have to work to figure it all out. It sounds like that's where Kristen and Carter are now, and it's up to them to determine what happens next.