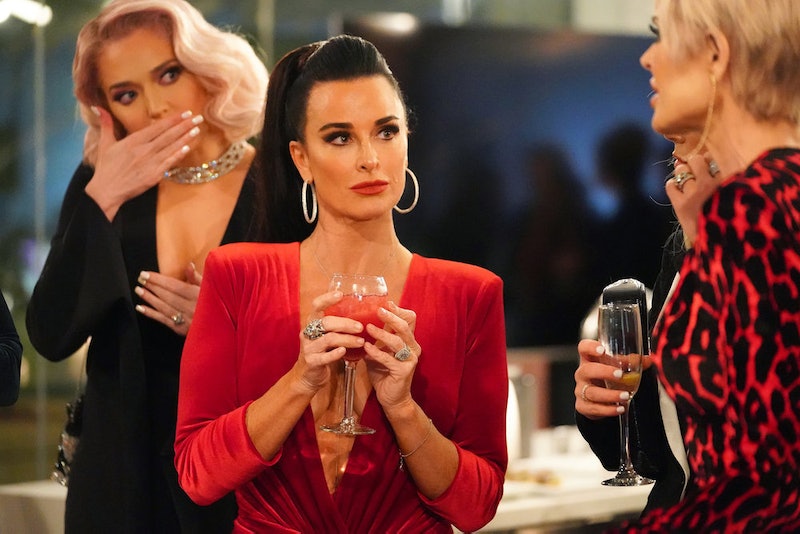 This season of Real Housewives Of Beverly Hills has been a long and varied one, right? First, there was the whole Lucy Lucy Apple Juice saga, and then Lisa Vanderpump and Kyle had that huge fight, and then Vanderpump took a random lie detector test, and then she vowed not to film with any of the other women. Now, instead of enjoying their time in Provence, France, where anyone could take me at any time, Kyle and Erika, of all people, are fighting. Kyle and Vanderpump still are on the outs, so let's hope that Kyle and Erika are friends again after their Real Housewives Of Beverly Hills fight.

This fight started over a dumb thing, like most fights on Real Housewives Of Beverly Hills do. Lisa Rinna dressed up like Erika Jayne for a costume party, and her Erika Jayne was really over the top. When Erika is snarky and kinda mean (but funny), it's disarming and funny. When Rinna did it, it wasn't as cute. Kyle and Teddi then asked Erika 75,587 times if she was OK with Rinna dressing as her (Erika said she didn't care, and it seemed true), and after about the 75,586 time, Erika was steamed. She gave an honest answer to a question, but they wouldn't take it.

Why is Kyle fighting with everyone this season, and why is she bringing Teddi along for the ride? Especially to poke the glamorous bear that is Erika Jayne? Erika will strike if she needs to, and Teddi is so not at that Housewife level yet. And frankly, Kyle can't afford to lose one more friend in this cast, and luckily, it seems like whatever happened in Provence has blown over.

Erika joked about their fight in a tweet, and Kyle retweeted it, so it seems like all is good?

According to Hollywood Life, a source says that things have "blown over" between Erika, Kyle, and Teddi after the group talked about the conversation and what made them mad and squashed it. You know, like grownups. They're now allegedly "closer than ever." It definitely didn't help that the whole group was pretty over-served the whole trip — you're drunk and one little comment can get blown way out of proportion. Between this anonymous source (Vanderpump, is that you?) and the tweet, I think it's safe to say this "feud" is over. It's nice that Kyle and Erika have allegedly called this mini-feud off, because they're fun together when they're together.

Oh, and for the record, Erika still isn't sure why she should have been mad at Lisa Rinna for her impression. On the Watch What Happens Live After Show, Erika said, “It’s not my place to be offended. I didn’t understand [why I should be offended], and I don’t understand it now. I thought [Rinna’s impersonation] was great… It was hilarious. We laughed our asses off." And isn't that all that matters? All is well that ends well, and imitation is the sincerest form of flattery. Any bit of fun Lisa Rinna had with Erika's persona was all in jest, and everyone else should just stay out of it.