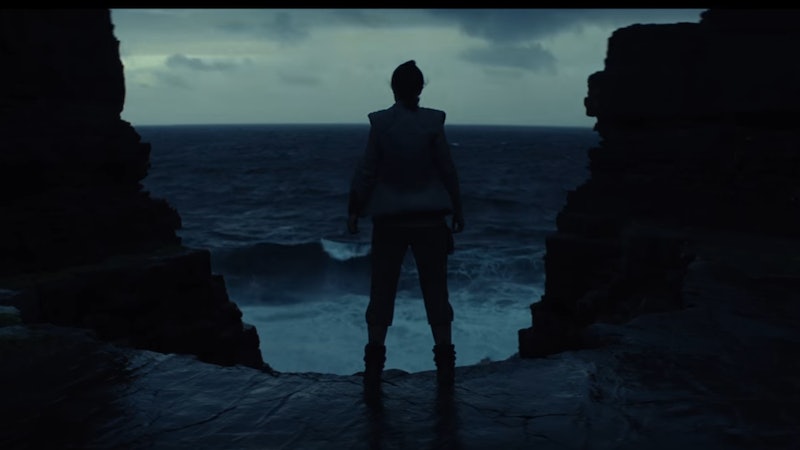 There is one big question on every fan's mind after watching the Star Wars: The Last Jedi trailer, and that question is: Who is the last Jedi? The movie's poster hints that the last Jedi may not be one person, but rather three. In other words, are Luke, Rey, and Kylo Ren the last Jedi?

The official poster certainly hints at that outcome. In red, Luke's face is framed against Kylo Ren's, while below them Rey is seen holding a lightsaber, sending blue energy pulsing between the two men. Taken together, the image suggests there are three parts in desperate need of becoming whole, if the Resistance has a chance of defeating the Dark Side for good. Rey could be the key to bringing Kylo Ren and Luke together, and revealing the last Jedi is a trio of people — perhaps, all members of the same broken family.

Interestingly, the international title of the film is The Last Jedi plural, meaning more than one. True Star Wars devotees know, Jedi can be both singular and plural, which makes the idea of Rey, Kylo Ren, and Luke being the last people possessing the powers of the Jedi completely plausible. If they are the last three people who can wield the immense power of the Force, then you can bet the final battle is going to be nothing short of epic.

With Luke focused on training Rey in the ways of the Jedi throughout the trailer, it feels like the story is building toward a clash between Rey and Kylo Ren. Once again, it will be light against dark, but will the ultimate goal be to end the Jedi line for good? Luke ominously says, "I only know one truth, it's time for the Jedi to end."

If Luke, Kylo Ren, and Rey are truly the final three Jedi left, then it may be up to Rey alone to protect the power. Luke's words hint at a possible turn to the Dark Side, or at the very least a belief that the power too easily corrupts people and needs to be stopped for good. In that case, Rey may truly be the only Jedi left fighting to preserve the Force's place in the galaxy.