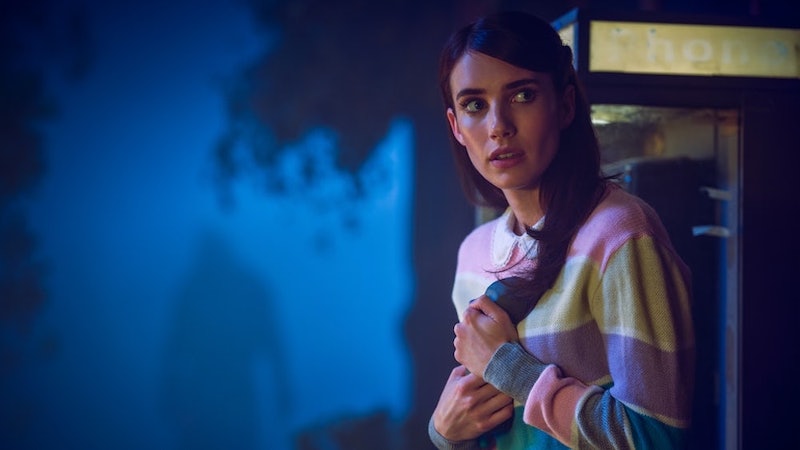 Spoilers ahead for the premiere of American Horror Story: 1984. It would have been enough to have one serial killer lurking around Camp Redwood, but per usual, American Horror Story is nothing if over the top. Not only has Mr. Jingles come back to terrorize the camp 14 years later, but new killer the Night Stalker has now emerged too. In fact, the timing of the whole thing is so fishy (how is it possible that two murderers just so happen to arrive at the same remote camp?), the Night Stalker and Mr. Jingles may even be connected. They definitely have at least one thing in common: their shared interest in Brooke (Emma Roberts).

Prior to arriving at Camp Redwood, Brooke was attacked and robbed in her home by the Night Stalker, aka Richard Ramirez. You may recognize the character from his brief appearance in Season 5's Hotel, where he attended the Devil's Night event Mr. March was hosting at the Cortez. He's also based on the real-life serial killer Richard Ramirez, who began his murder spree in California in 1984 and was convicted for killing 13 people in the mid-'80s. He died in 2013.

In AHS: 1984, we first see Ramirez when he breaks into Brooke's home and demands that she give him her jewelry. After taking what looks like a wedding or engagement ring from her jewelry box, he attempts to kill Brooke, but she manages to stave him off until a neighbor yells that they've called the cops. Just before Ramirez leaves, he makes Brooke a promise: "I'll find you! Satan will show me the way!"

Sure enough, by the end of the premiere episode, Ramirez is spotted at Camp Redwood keeping a watchful eye on Brooke from afar. But he isn't the only one out to get her: Mr. Jingles, who massacred nine people at the camp back in 1970, has returned to finish what he started. Brooke is the only one who's managed to catch a glimpse of him so far (the others think it's just her imagination playing tricks on her.) And while his main target may still be Leslie Grossman's Margaret Booth — the one victim who got away during his original reign of terror — he chased after Brooke and lured her to the ringing payphone so that he could scare her on the other end by jingling his keys.

It's a scary and unfortunate situation for Brooke to be in, but what is it that makes both of these killers so interested in her? Mr. Jingles and the Night Stalker haven't interacted with each other (that we know of), but it can't be sheer coincidence that they're not only in the same place at the same time, but also appear to be pursuing the same exact person.

Maybe Ramirez and Mr. Jingles already know each other. Maybe they don't. But one thing's for sure: if they do decide to team up, Camp Redwood's counselors don't stand a chance of getting home alive.