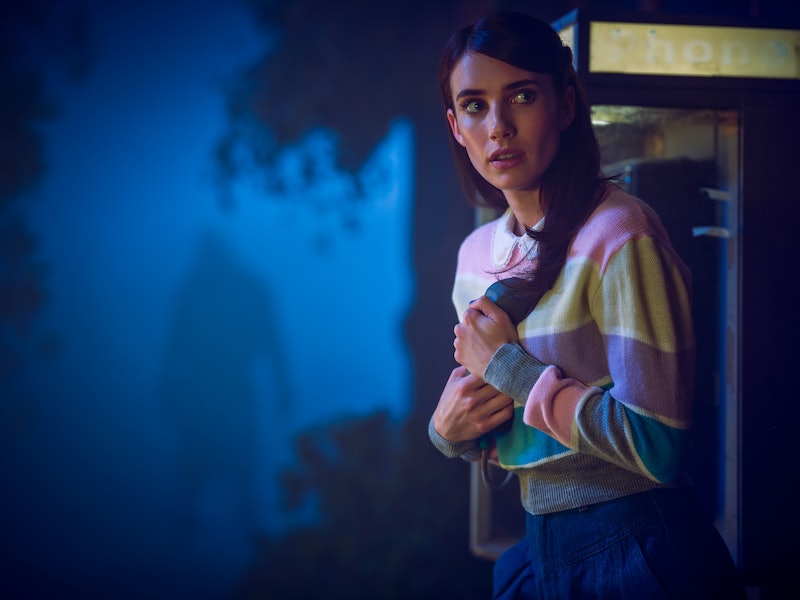 Every season of American Horror Story has a lot in common: blood, sex, scares, and campy performances. But what's exciting about the anthology series is what each season doesn't have in common: namely, what they're about. The plot of American Horror Story: 1984 was something of a mystery for a while, just like it is for every season — and what keeps viewers addicted and coming back for me is the thrill of discovering what Ryan Murphy has in store for each new installment.

Based on its title alone, you'd be forgiven for thinking that Season 9 of the anthology was going to center around a dystopian society watched over by repressive totalitarian regime with a predilection for spying on its own citizens. But although it shares its title with George Orwell's classic cautionary fable, 1984 has something a bit more… camp in mind. Literally.

It turns out that 1984 is not a reference to the novel, but rather to the year itself, and the films that were most popular during that time period. Season 9 is a throwback to the heyday of '80s slasher movies — most specifically the Friday The 13th series, from which Murphy seems to have cribbed more than a little inspiration.

"In the summer of 1984, five friends escape Los Angeles to work as counselors at Camp Redwood," the official press release for the premiere states. "As they adjust to their new jobs, they quickly learn that the only thing scarier than campfire tales is the past coming to haunt you." Pretty straightforward, right? But it wouldn't be a season of American Horror Story without some sort of twist… and the press releases for future episodes hint at a huge turning point in the season.

The second episode of the season, titled "Mr. Jingles," seems like it will go in-depth on the titular killer as he picks off the campers: "Darkness descends upon the camp. Although it's lights out, evil has no curfew." The title of the third episode is a clever reference — "Slashdance" — and promises plenty of mischief and mayhem: "Imitation is the best form of tragedy. Coming clean can be pretty messy." The fourth episode, "True Killers," finds things heading towards a dramatic climax: "Mr. Jingles closes in on the one who got away as the counselors rally to escape Camp Redwood.

But it's the official description of Episode 5, titled "Red Dawn," that really raises the eyebrows. The press release teases that, "As twilight broaches, the survivors brace for a final brawl." A final brawl? In the fifth episode of a 10-episode season? This description might indicate a huge turning point for 1984 at the midway point of the season, much like when Season 6's Roanoke switched halfway through from a faux-documentary to a behind-the-scenes slaughter. But what could the twist of 1984 be?

The clue could be right there in the title. Is 1984 actually a double entendre, both a shout-out to the year in which the season takes place and a reference to Orwell's most famous work? Will it be revealed halfway through Season 9 that the events at Camp Redwood have been part of some top-secret government program, and the counselors were being watched the whole time while they were being slaughtered? (If so, is Season 9 just Ryan Murphy's remake of Cabin In The Woods?) Or will it be revealed that the counselors are really inside some futuristic simulation and being tested for some nefarious purposes? (If so, is Ryan Murphy just trolling Netflix's recent misfire, The I-Land?)

Whether 1984 plays it straight all season or pulls the rug out from viewers halfway through, Season 9 is bound to be unlike any other iteration of American Horror Story viewers have ever seen before: it's the first season in which AHS mainstay Evan Peters won't appear. But there should certainly be enough to keep distraught viewers distracted, thanks to returning AHS veterans Emma Roberts, Billie Lourd, Cody Fern, Leslie Grossman, and John Carroll Lynch (aka Twisty the Clown, now preying on victims as Mr. Jingles), as well as familiar faces from the Murphy-verse like Matthew Morrison (Glee) and Angelica Ross (Pose), alongside fresh meat like Zach Villa (Shamless) and Gus Kenworth (yes, that Gus Kenworthy).

Find out what Ryan Murphy has in store for fans next when you check into Camp Redwood on Wednesday, Sept. 18… if you dare.

More like this
Here’s Everything Coming To & Leaving Netflix In February
By Jake Viswanath
'That '90s Show' Is Officially Coming Back For Season 2
By Gretchen Smail and Grace Wehniainen
The Plane Crash In 'Dear Edward' Is Based On A 2010 Tragedy
By Grace Wehniainen
Keyla Monterroso Mejia Is Finally The Star Of The Show
By Gabrielle Bondi
Get Even More From Bustle — Sign Up For The Newsletter
From hair trends to relationship advice, our daily newsletter has everything you need to sound like a person who’s on TikTok, even if you aren’t.