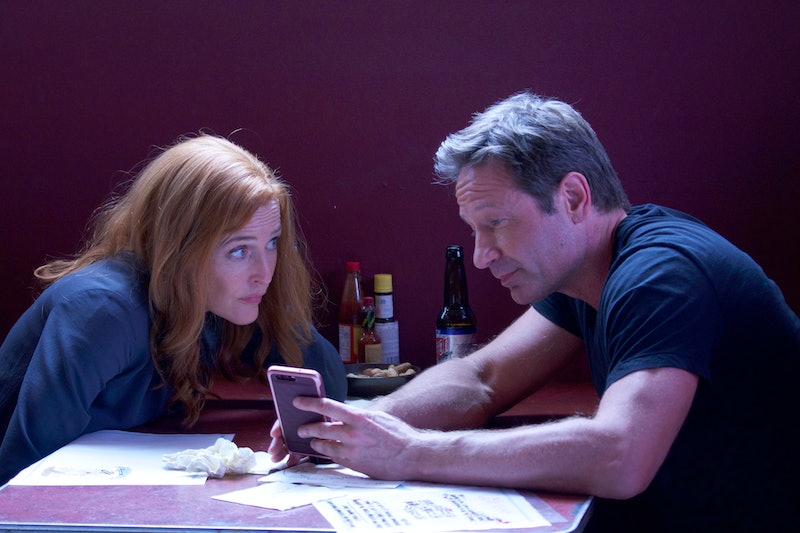 When The X-Files was dropped into the great revival machine of the '10s, the search for the truth began again in earnest, in a medium that fans hadn't really been expecting. The last we saw of Mulder and Scully outside of comics was in the 2008 feature film The X-Files: I Want To Believe. And they were, though no longer actively investigating the paranormal, living and sleeping together. Yay. Mulder and Scully's relationship on The X-Files evidently took a turn between the second movie and the first "event" series. Season 10 found them estranged and six episodes didn't do much to explain why two people who'd spent the majority of the last 25 years side-by-side had suddenly given up. 'Shippers have to be hoping for a resolution to the pair's undefined troubles when The X-Files comes back on Jan. 3.

Speaking to press at New York Comic Con in October, series creator Chris Carter seems to refer to fan backlash over the state of the Special Agents' union in Season 10. "We’ve always written about what we’re interested in, and the audiences have come with us," the showrunner says. "We continue to do that, but we’re always mindful of what people are saying. I think that the thing I heard loudest was from the people who were interested in Mulder and Scully’s relationship. Why were they apart when we last saw them together?"

As a fan, you'd hope that if these characters you've invested years of your life in were to suddenly lose not just a romantic partner but a best friend and colleague that the episodes themselves might rationalize it. But Season 10 did anything but spell it out for viewers, and the chemistry that actors David Duchovny and Gillian Anderson have kept fresh since 1993 made the decision even more glaringly bizarre. It's interesting that Carter seems to have been surprised by the response, considering how passionate and vocal the show's fanbase is. But there's hope for this coming season, and it sounds as though he's ready to — finally — give the people what they want.

"Life has peaks and valleys," Carter says. "Mulder and Scully went from this peak were there were together and they found themselves in a valley where they weren’t. I think we are dealing with that relationship which is always transforming in an interesting way in Season 11."

A promo for the new episodes seems to confirm at the very least that the transformation includes Mulder and Scully sharing a bed again. Weirdly, it's big news, despite the fact that they first (to the audience's knowledge) kissed in the Season 7 episode "Millennium," had an adult sleepover a few months later in "All Things," confirmed that Mulder was the father of Scully's baby William in Season 8's "Existence," ran away to go off the grid together in the finale of the original series, and were a full-fledged couple in I Want To Believe. And all that following years of crying at bedsides, flirting like mad, and barely dating anyone else.

At this point, Duchovny thinks of the way The X-Files often seems to walk back its own history as an aspect of the show, especially as it pertains to the confusing arc of Mulder and Scully's will-they-won't-they-they-already-did relationship. "'Did we have a love scene last week and now we’re doing this? Now we’re acting like we’ve never held hands?'" the actor says, also at NYCC. "So you know, there’s a little bit of that to to the nature of our show, which is kind of this amnesia that happens sometimes. Selective amnesia."

Anderson is wary of giving away much, but just the fact that there's something new to give away is promising. "I’m not sure what I’m actually allowed to say, whether they’re living together or not living together," she says. "They are… they’re working together. They’re professionally working together and they are still very friendly and they care about each other very much."

Depending on your definition of "friendly," you could interpret Anderson's comments to mean that Season 11 will finally give 'shippers the closure they've been waiting for. And since Anderson has said several times that she won't be returning to the show after the season finale, this is Mulder and Scully's last chance for a happy ending. Ideally, together.