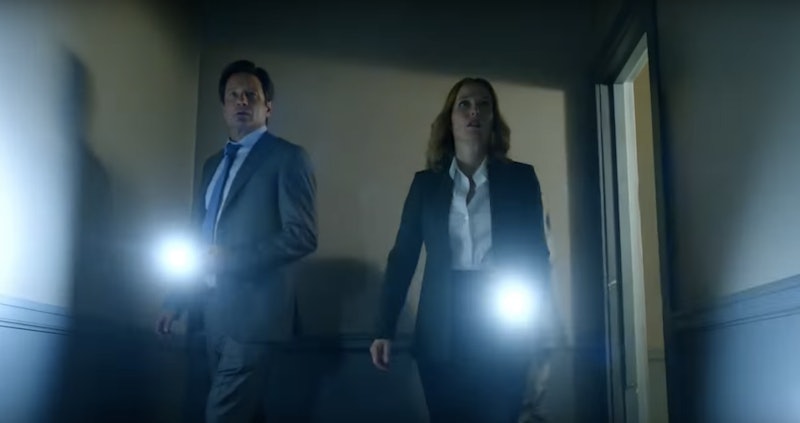 It was certainly exciting when the revival of The X-Files went down and we got six more episodes of one of science-fiction's greatest masterpieces. It 'twas a glorious and fresh look at our favorite believer and skeptic, smoldering Mulder and equally smoldering Scully. So it's even more exciting that, according to Deadline, Fox announced that The X-Files Season 11 is officially happening. Not only that, but there will be 10 episodes. This is truly great news for X-Files fans who still want to believe, especially after the cliffhanger ending of Season 10. Don't worry, no spoilers here, but gosh, that ending.

But X-philes aren't the only ones who are excited about the upcoming 2017-2018 season, which is set to shoot this summer. Fox Broadcasting Company president David Madden had nothing but nice things to say about continuing the series. According to Deadline, he said,

"Iconic characters, rich storytelling, bold creators — these are the hallmarks of great TV shows. And they are some of the reasons why The X-Files has had such a profound impact on millions of fans worldwide."

He went on to compliment the series creator and director, Chris Carter along with the iconic work of David Duchovny and Gillian Anderson as the dreamy Fox Mulder and even dreamier Dana Scully. He shared, “Chris’ creativity, along with the brilliant work of David and Gillian, continue to propel this pop culture phenomenon, and we can’t wait to see what fresh mysteries Mulder and Scully uncover in this next chapter of The X-Files.”

The original X-Files ran from 1993 to 2002, and during that time period catered to lovers of alien mythology, monster-of-the-week episodes, and (mostly unexplored) intense sexual tension between main the characters. The new season managed to convey the same sort of goofy but extremely serious features, though set years later. Though things had changed for both the actors and the characters they portray, the same spark was still there. I'm so excited for the same vibe to continue in Season 11.

I know it's totally a crazy, hare-brained wish, but I can't help but hope maybe, just maybe, The Lone Gunmen will make an appearance that isn't just a Mulder hallucination. What if they faked their deaths in Season 9, as The X-Files Season 10 comic book series describes? I mean, we all thought the villainous Cigarette Smoking Man was killed by a rocket blast at the end of the original The X-Files, but then he showed up at the end of Season 10's premiere episode, "The Struggle," lending his two cents about the X-Files being reopened. As much as I want to believe Season 11 will be just as awesome as Seasons 1 through 10, I also want to believe the MVPs of the series will show up, for real this time.

My Lone Gunmen fantasies aside, Season 11 is sure to be a real treat. Get ready for all the alien-based drama your brain can hold.

More like this
A New 'And Just Like That' Table Read Pic Confirms A Key Character's Return
By Jack Irvin and Grace Wehniainen
Netflix Reveals First Look At Wednesday In The 'Addams Family' Spinoff Series
By Bustle Editors
Nicola Coughlan Shared A Lady Whistledown Excerpt From ‘Bridgerton’ Season 3
By Grace Wehniainen, Alyssa Lapid and Sam Ramsden
You’ll Definitely Recognise Both Of Ty Tennant’s Parents
By Maxine Harrison
Get Even More From Bustle — Sign Up For The Newsletter