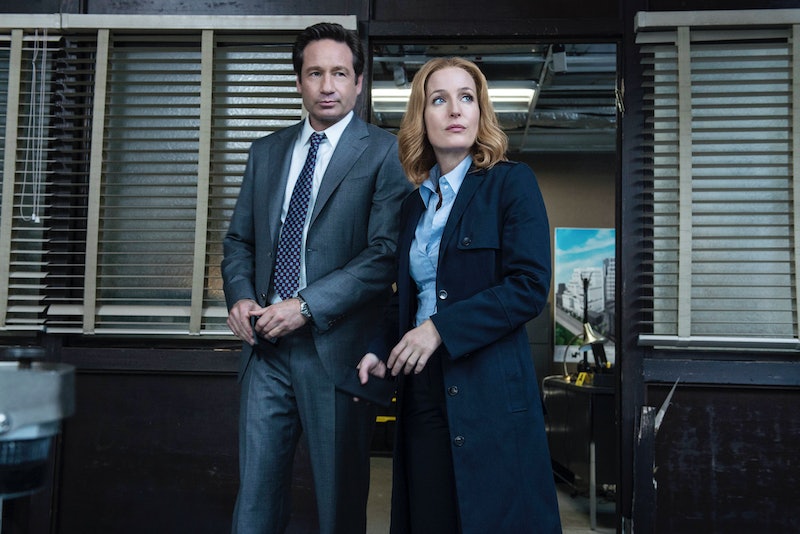 I'm not going to lie and say that I've cooled off about The X-Files Season 10 finale — two weeks later, I remain seriously chagrined that Mulder's about to die, William's location is unknown, and a UFO is hovering above D.C. for reasons that remain unclear. It was a lot to handle and viewers everywhere were left collectively asking, "what the heck happens now?" Although another season has yet to be scheduled or even confirmed, it's never to soon to start forming theories about The X-Files Season 11.

According to a recent interview with TVLine, Chris Carter seems to think Season 11 is a definite: "I can’t imagine, with the ratings that we’ve got and the way we ended this season, that there won’t be more X-Files." I want to believe he's right, because Mulder and Scully deserve a way better send-off than the one they got. In the series' initial run, nearly every season ended with a cliffhanger — but "My Struggle II" is arguably the most epic finale yet. The other cliffhangers typically involved the safety of Mulder or Scully and the constant question of whether or not the X-Files would be shut down — but this is the first time that the future of the entire world hangs in the balance. So, in defense of "My Struggle II," it does mean there are potentially a lot of interesting avenues that could be pursued next season.

Here are four theories about what Season 11 may have in store:

Theory #1 — A Major Character Will Be Abducted

The ending of "My Struggle II" was left deliberately (and infuriatingly, IMHO) open-ended. The aliens seem to have shown up, but do they come in peace? It's really anyone's guess. Of course, it's possible that William is en route to save his father's life — but I doubt it'll be that simple. A mass abduction may occur — or one major character could be taken and I'd say Scully is the most likely candidate. Although I'm majorly skeptical of a season that doesn't feature Scully in every episode, this scenario could mean the show would return sooner rather than later. Gillian Anderson recently told Rolling Stone that she's open to filming another season under the right circumstances, but she also made clear that she has professional and family obligations in London.

David Duchovny seems more enthusiastic than his co-star — he told Ellen DeGeneres that he "would love" to film another season and he posted an Instagram that read "The Truth Is On Hiatus" the day after the finale. A Scully abduction could mean that Anderson would be integral to Season 11, but she wouldn't be in every episode. It seems likely that Miller and Einstein will be involved in Season 11, so the remaining agents would have to team up to find Scully. If this is the case, let's hope that Mulder is somehow cured STAT because I just don't trust these two new agents to rescue our beloved Scully on their own.

Theory #2 — The Vaccine Was Part Of The CSM's Plan

The Cigarette Smoking Man must have known Scully's alien DNA combined with her scientific knowledge would mean she'd find a way to create a vaccine — and perhaps that's exactly what he wanted. He may have even ordered Reyes to visit Scully and feed her the information that lead to the creation of the "cure." In this case, Scully and Einstein would have unwittingly played right into the CSM's hand by injecting countless people with alien DNA in an effort to save them.

Reddit user expiredtvdinner suggests the endgame plan is alien colonization: "[T]here is no 'Spartan Virus' that will be eradicated by alien DNA. It's an advanced form of nanobots, mimicking sickness to bring forth the next step in colonization: the mass infection of the populace with alien DNA."

We've seen Mulder and Scully unwittingly aid the CSM before, so this isn't terribly far-fetched — and it would be a great set-up for Season 11.

Theory #3 — Tad O'Malley Is Part Of The Conspiracy

On the surface, it appears that Tad O'Malley sought out Mulder because fellow believers are hard to come by and he admired his work. But what if he contacted him because he knew Mulder would quickly and easily buy into his conspiracy theory? In the revival's first episode, Scully cautioned Mulder against getting caught up in O'Malley's web and reminded him that he was on dangerous ground because he "wants so badly to believe." It was never explained how O'Malley had so much intel or why he was so well-prepared for the apocalypse. Is he working with the CSM and Reyes? Will he resurface in Season 11 as Mulder and Scully's nemesis rather than purported ally? Trust no one.

Theory #4 — William Returns, Cures Mulder, And They Live Happily Ever After

This theory hinges on Chris Carter recognizing that it's time to stop torturing X-Files fans. He gives us a Mulder-Scully family reunion, complete with Mulder not dying because their "miracle child" shows up in time to save his life. (At this point, I don't really care how — I just want to see this 15-year-old William character they talked about ad nauseam throughout the revival.) Season 11 consists solely of "monster of the week" episodes, preferably penned by Darin Morgan. In this fantasyland, maybe Mulder and Scully will even solve a case for the first time in 23 years. Mulder, Scully, and William live happily ever after — end scene. A girl can dream, right?