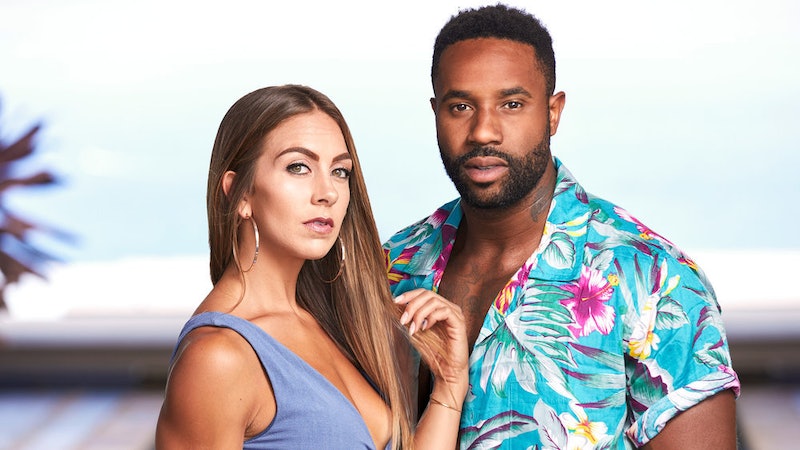 There aren't many instances in which the sequel is better than the original, but USA Network's reboot of Temptation Island is proving to be pretty dang good. The drama is only building with each episode — the fate of each couple becoming more and more uncertain. Fans have their theories about everyone's futures, and of course, the cast members can't announce their relationship statuses just yet. But based on their recent social media activity, whether or not Nicole and Karl are still together looks like a 50/50 shot.

If there were a score board hanging over Temptation Island that gauged each couple's loyalty to one another, Kaci and Evan would definitely be in last place. In a recent episode, Evan revealed that he's all in with feelings for Morgan, and that left Kaci heartbroken. In third place would be Kady and John. Kady is not being shy about opening up to the singles, and it sometimes seems like she's forgotten about her boyfriend entirely. Meanwhile, Nicole and Karl would come in second, meaning their relationship could go either way. They both finally dipped their toes into curiosity, but neither of them have given in just yet.

Nicole found herself inviting her date, Tyler, up to her room during the Feb. 12 episode. Nothing happened between them, but it was still a huge move compared to her quiet demeanor up until then. Karl was tempted by a steamy hot tub sesh with Brittany, but ultimately kept his cool. "I could've easily given in to temptation...but I didn't!" he tweeted the day after the episode aired. "The pressure was definitely on, I just couldn't."

On Valentine's Day, Karl shared a lot about the importance of love and respect in a relationship. He never directed it toward a special someone, but whether or not it's with Nicole, he's definitely feeling the love from someone.

On the same day, though, he also shared some shady tweets about cheating in a relationship, which seems peculiar following his appearance on Temptation Island. "If she says she's sick all of a sudden today, she's with the guy she told you not to worry about," he wrote. Is that an excuse he's familiar with?

Nicole, on the other hand, shared mostly about self-love on the romantic holiday, while also mentioning her inability to talk about how she may or may not have been celebrating. "You ever want to express your feelings on Vday but @TemptationTV has you in an NDA so you can't," she wrote. She recently celebrated her 26th birthday, and on Instagram, wrote that "25 offered a lot of change."

After Temptation Island, both Nicole and Karl are continuing their jobs as fitness instructors in Chicago, so if they're not together, they definitely have the chance of running into one another. It may be a coincidence, but they also both recently posted their fasted cardio routines on Instagram, which seems suspicious. Maybe they're still workout buddies, at least? To see what's next, tune into Temptation Island on USA Network on Feb. 19 at 10 p.m ET.