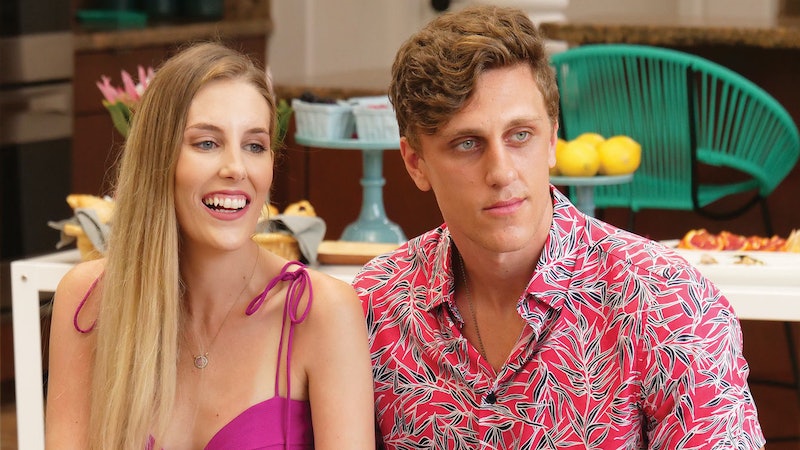 When you’re in a relationship, various things come up that test the strength of it — whether it’s resolving everyday conflicts or if your significant other suddenly gets a new attractive coworker that they seem to mention a lot. Or perhaps you and your partner have been dating a few years and you’re ready to take things to the level and get engaged, but they’re not — do you give them an ultimatum? If you’re wondering how ultimatums affect relationships, that’s just one theme that’s explored on USA Network's Temptation Island (Tuesdays, 10/9c).

As of January 15, the show is back, and in this rendition, four couples test their relationships and are tempted (or not) by potential new suitors, 12 single men and 12 single women — three people for each coupled up person. One plot that’s been escalating on the show is the relationship between Evan and Kaci, both 28 years-old. The two have been together a while — and while Kaci is ready to get engaged, Evan is not quite there yet. So, she’s given him an ultimatum.

“In episode three [on Jan. 29], Kaci is in bed crying about the ultimatum she gave Evan; she was tired of waiting for a proposal,” Tracy McMillan, Temptation Island’s relationship expert, tells Bustle. “But then she has an epiphany and thinks the ultimatum did more harm than good to their relationship. She even wonders if they’d even be on the show if she had just let Evan come to the decision to get married on his own time.” Kaci also talks about the pressure she felt from her family to get married and have children, but now realizes she doesn’t need a ring and title to appreciate what she has with Evan. Regarding the ultimatum she gave Evan, Kaci tells the camera, “Girls, don’t ever do it — ever.”

Kaci and Evan’s ultimatum may be relatable to other couples who have found themselves in a similar situation. For instance, if one wants to move the relationship forward but the other is comfortable with where it is, is giving the other person an ultimatum OK?

“Ultimatums might work in the short-term — lots of people get so scared to lose their partner that they’re willing to pop the question even though they might not be totally ready,” McMillan says. But she says the problem with ultimatums is twofold. “First, an ultimatum is really a form of coercion; after all, you’re threatening your partner with the pain of abandonment if they don’t do what you want,” McMillan says. Rather than trust that your partner will come to the decision on their own, she says that, with ultimatums, you’re taking matters into your own hands.

“Second, a key aspect of building trust in a relationship is mutuality — relationships, especially in the long-term, function best when both partners are equally invested,” McMillan says. In other words, when you give your partner an ultimatum, you are losing the knowledge that your partner chose you of their own free will, she says. “Knowing you have been chosen by your partner is a really precious thing that you don’t want to give up just because you’re impatient,” McMillan says.

The Difference Between Ultimatums And Boundaries

When it comes to relationships, having healthy boundaries in place is an important part. But the lines between boundaries and ultimatums may sometimes get blurred. “I think people confuse ultimatums with setting boundaries,” McMillan says. “They’re thinking: I am trying to live my life, I want marriage, and I can’t let this other person tie up years of my life because they can’t make a commitment to marriage.” The key difference is that ultimatums are an attempt to control another person’s behavior, McMillan says. “Setting boundaries is different — it’s not about the other person’s behavior, but about your own; it’s an entirely different way to frame things.” She says that, with a boundary, you can say something more like, “I am no longer comfortable in this relationship at this level of commitment. I acknowledge your right not to be ready for marriage, and I wish you all the best, but this is no longer right for me. I am leaving you out of love for myself and respect for your process.”

The Best Way To Avoid Ultimatums

In addition to setting clear boundaries in your relationship, or moving on if you choose, McMillan says there is a way to avoid ultimatums altogether. “The best way to avoid an ultimatum situation is to be clear about what you’re looking for in a relationship,” she says. “This isn’t about getting the other person to sign on to anything; it’s about knowing what you’re looking for in life and being honest about it.” She thinks oftentimes people don’t want to scare someone away in the beginning, so they say they’re OK with a friends-with-benefits arrangement — even though they know that, deep down, they want a long-term commitment. Or, they don’t talk honestly about what they want. “It takes a lot of vulnerability to do that,” McMillan says. “But really, honesty is worth risking, because if the other person doesn’t want what you want, wouldn’t you rather know sooner than later?”

More like this
Think Your Partner Is Cheating? These Tarot Cards May Confirm Your Suspicions
By Kristine Fellizar
Why A Libra & Libra Couple Might Become Codependent
By Kristine Fellizar
10 Ways To Be More Empathetic To Your Partner
By Raven Ishak and Lexi Inks
Are Quality Time & Gift-Receiving Love Languages Compatible?
By Lexi Inks
Get Even More From Bustle — Sign Up For The Newsletter