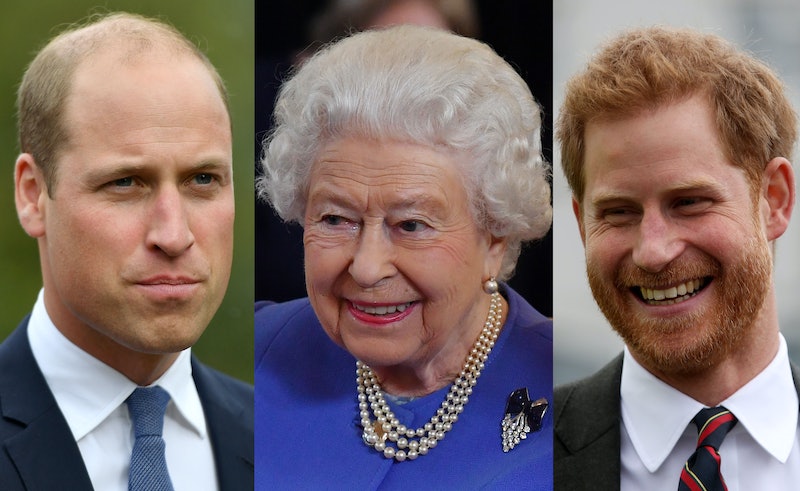 As a self-confessed royalist, I love hearing all the details about life inside the royal family, no matter how small. From Prince Harry and Meghan Markle to Kate Middleton and Prince William, I'll be the one first in line to check out new pictures of the royals or to read a story about what they've been up to. But one thing I've always wondered is how close are Prince William and Prince Harry to the Queen? Let's take a deep dive into their relationship to find out.

The most the two Princes have ever opened up about their relationship with their grandmother has to be in a 2012 interview with Katie Couric for the American TV channel ABC. The TV host had impressive access to the pair, and was able to ask them about their relationships with Her Majesty. It sounds as though the brothers have a respectful yet warm approach to The Queen. "I still think she's just my grandmother, really," said William. "I'm probably a bit of a cheeky grandson, like my brother as well. We both take the mickey a bit too much. But I remember always having a healthy respect for my grandmother."

During the same interview, Harry agreed with his brother's comments. He added: "Behind closed doors, she's our grandmother, it's as simple as that."

But what we all want to know — and what Couric had the bravery to ask — is, do the Princes just "hang out" with their grandma, like we do with ours?

"Do you have to make an appointment to meet with your grandparents or can you just pop by the palace," Katie asked. To which Harry responded: "It depends where she is. She's always very, very busy and the grandparents never seem to be in the same place as us. If they're around and we're in close proximity, it is always nice to pop around."

Not content with this answer, Couric pushed: "But if you wanted to, could you just say "Hi, can I come over for a cup of tea?"

Harry explained: "I'd like to think so. I'm sure if I rang her up and said 'can I come over for a cup of tea' she would hopefully turn around and say 'yes, please do.'"

More recently, in 2017, William spoke of his grandmother's protective attitude following the tragic death of his mother Diana in the BBC documentary Diana, 7 Days. "At the time, you know, my grandmother wanted to protect her two grandsons, and my father as well."

William told the makers of the show in comments that seem to suggest a loving and care-filled relationship that, "our grandmother deliberately removed the newspapers, and things like that, so there was nothing in the house at all. So we didn’t know what was going on."

However, in 2016, Prince Harry opened up further in the BBC's Elizabeth At 90 – A Family Tribute. He explained that "I still view her more as the Queen than my grandmother" and that "I always view her as my boss."

These statements were echoed by Harry following the viral Invictus Games video he created with The Queen. While the video undoubtedly showed Her Majesty's fun side and proved the warm relationship between the two, Prince Harry said the following of the video to the BBC, suggesting he had to be careful in asking The Queen to be involved:

"I think the biggest pressure for me was wanting to ask her but not wanting to put pressure on her. She is my boss. She's all of our bosses."

It seems fair to say that the Princes have a warm and loving relationship with The Queen, but one that is filled with respect and an understanding that she is still very much in charge.

And it goes without saying I can't wait to see if more is revealed in Tuesday night's Queen Of The World documentary by ITV, which is on at 9.15 p.m.

More like this
Rhys Ifans Has A Good Reason For Keeping His Love Life On The DL
By Maxine Harrison
'House Of The Dragon’s Theo Nate Is A “Massive” 'GoT' Fan
By Maxine Harrison
DJ Tyler West Is Probably Safe From The “Strictly Curse”
By Maxine Harrison
10 Photos Of William, Harry, & Their Cousins Honoring The Queen Together
By Stephanie Topacio Long
Get The Very Best Of Bustle/UK