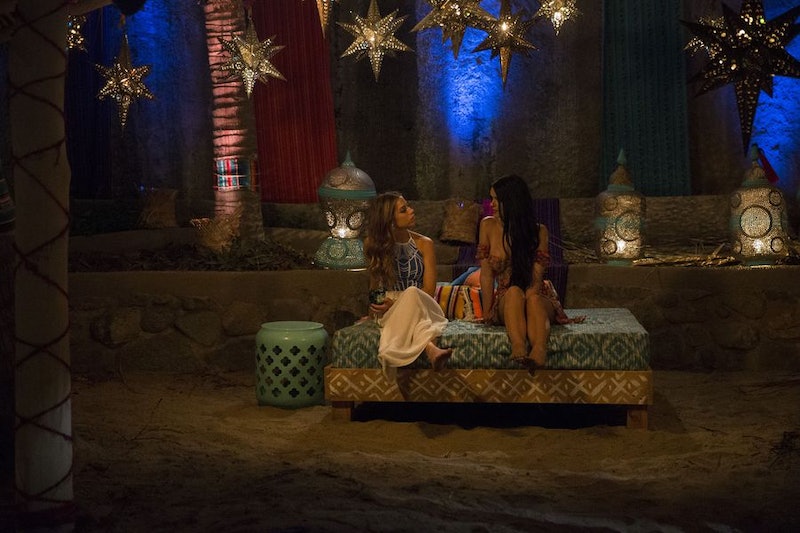 One of the hardest bridges to cross in a friendship is when your friend is dating a real jerk face and you have to be polite about it but also gently tell them that said jerk face is not worth their time. On Bachelor In Paradise, Kristina and Raven have hit that point — they were friendly on Nick Viall’s season of The Bachelor (that’s where they met), but are Kristina and Raven still friends after Bachelor In Paradise?

It’s tough, because Kristina has watched Dean make out with and go out on dates with Danielle Lombard and then come back to Kristina and then go back to Danielle and so on. Say what? Honestly, if I were Kristina's friend, I would step in and say something, which Raven eventually did. But if you've ever been the messenger friend, you know you're taking a big risk. As one can expect, Kristina and Raven's fight didn't exactly go well on Monday's BiP. It started with Raven telling Kristina that she can't blame Danielle for Dean's wandering eye, and it ended with Raven saying, "I'm your friend, I tell you the truth, but you don't want to hear the truth."

It's worth noting that Raven's insistence that Kristina looks at Dean and not Danielle for fault in this love triangle is a million percent right. Dean is the one pursuing Danielle, and Kristina's insistence that Danielle is "not innocent" in the situation is petty and outdated. Raven is telling the truth, but in this emotionally charged situation, the truth is hard to take.

In any case, Kristina and Raven were friends once, and I want them to still be friends post-fight. Since these ladies are millennials like myself and love to post on social media, I decided to go there and do some sleuthing. And guess what? They totally are! Kristina is even in Raven's Twitter profile header. Here's one from Instagram of Raven and Kristina hanging with Alexis "Shark Girl" Waters mere days ago!

It sure looks like these ladies are buds, and that's a good thing. Emotions are heightened in Paradise, and it was all probably blown up much bigger than it had to be. Raven recently shed some light on why she needed to say something to her friend:

Raven's frustration came from Kristina not standing up for herself or seeing that she deserved better than Dean, and I get it. You love your friends, and you want them to love themselves. And, Wells put it, why fight for someone who won't fight for you? (Wells, like Raven, is very wise.) I'm glad that Kristina and Raven are both doing so well post-Paradise, because every woman needs a friend who will keep it real even when it's tough to tell the truth.