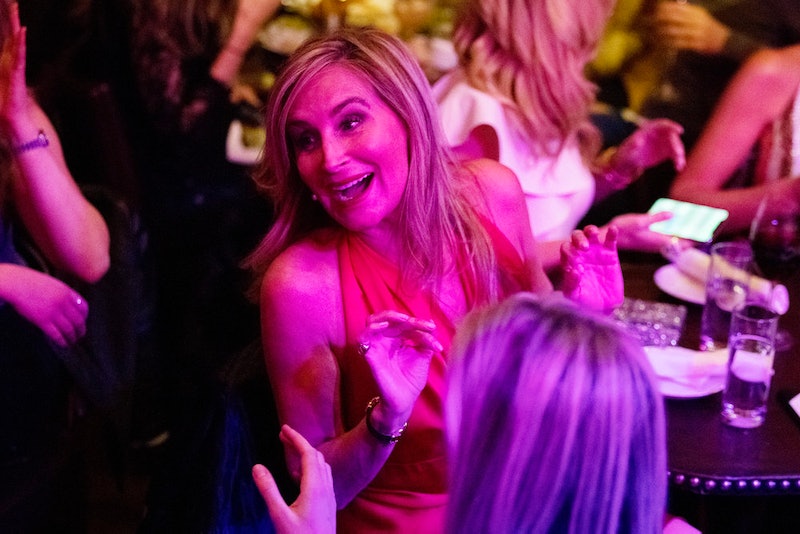 While one could think that pre-existing friendships can make being on a show like Real Housewives Of New York easier, it actually can make things worse. Sure, it's a way to get in and feel more comfortable with the cast members you don't know, but when women like Sonja and Dorinda fight with Luann and Barbara, it's tough, because it's not just about that one fight — it's about the other fights before it, too. Right now, Dorinda and Sonja are on opposite sides of the Luann/Dorinda drama, and things are getting even uglier. Dorinda and Sonja's friendship on Real Housewives Of New York has definitely changed in the wake of his storyline.

Familiarity must breed contempt, because this isn't the first time that Sonja and Dorinda have been down an ugly road. In Season 10, Dorinda and Sonja fought over Sonja comparing her divorce to Dorinda's husband's passing, because Dorinda maintained that the two are incomparable. Sonja took it all in stride, telling OK!, "Dorinda can talk to me all she wants about Richard and the pain she’s going through," Sonja told OK!. "But, when she starts to attack things that affect my family and my daughter, that’s when I start to draw the line. And I start to wonder if I even want to be friends with her."

Who could forget this screaming match?

Later, Dorinda said she had a "file" on Sonja, which is creepy, but for Season 11, it seemed as if the two had made up. Until the March 27 episode, when Sonja and Dorinda got in an altercation about Luann and the 2018 lawsuit that Luann's children brought against her barring her from selling her Hamptons home. It's nobody's business, as Sonja said, but somehow, Dorinda is dead set on bringing Luann down, and she's using this lawsuit as ammunition. For what? That's unclear.

But whatever happened in 2018 between these two appears to be over, because Dorinda and Sonja have hung out in the year 2019 — they're still friends. They must have put aside their differences in their opinions about Luann, because Sonja, Ramona, and Dorinda seem like three peas in an overfilled pod.

Sonja is still the straw that stirs the drink, and she tries to get along with everyone on the show. That's Sonja's nature — she really doesn't bite unless someone bites hard first. Dorinda is a little harder to pin down, because she can get mean when she's mad (as viewers saw in Colombia with Luann). Dorinda is not a fan of Luann's friend (and new cast member) Barbara Kavovit — she's even thrown Barbara out of her house. According to Us Weekly, Dorinda has even claimed that Barbara blocked her and Luann from reconciling.

Whether that's actually true remains to be seen and will probably be revealed as Real Housewives Of New York's season progresses, and all fans can do is wait. But at least some of our favorite friendships are intact or, at the very least, on the mend.