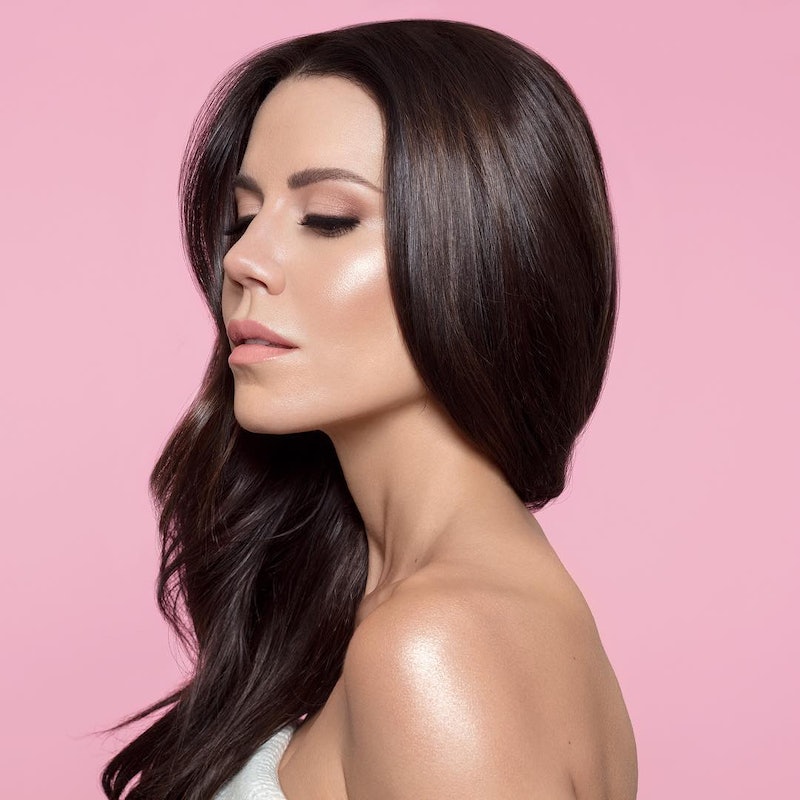 Beauty gurus have been launching products left and right, but the one that appears to be on everyone's minds right now is Tati Westbrook's Halo Beauty. Why is that? Well, it was a completely unexpected launch. While many YouTube gurus launch makeup products, Westbrook didn't. Nor did she decide to go with skin care. Instead, her Halo Beauty brand launched a hair, skin and nail vitamin. While some were so happy to have a Tati-approved product, others were questioning of the product and its launch. Now, however, Westbrook is addressing some of the questions surrounding her brand.

While Westbrook has not released an official YouTube video as of press time (though her Twitter says that a "long" video is coming"), she did take to her Snapchat account late into her launch day to address some of the biggest questions that her subscribers had about the product — and it's clear that Westbrook is completely confident in her brand and the work she did to create it.

In her Snapchat, Tati opens by saying that while she understands people have questions, she won't tolerate any sort of aggressive of bullying behavior from users and admits to blocking some commenters, which is a sore spot with some users.

After the housekeeping information about not threatening others on her site and social media, Westbrook started to look at questions from fans. She began by explaining that she did not craft the brand by herself. That she is, "working with the best physicians, the best scientists, the best nutritionists. I have a team. I have advisors. We have talked about this formula through and through to get it to this point, and it is safe."

Westbrook does go on, however, to explain that any time you're ingesting something you should be talking to your doctor. She specifically cites those who have existing medical conditions or those who are breastfeeding or pregnant. In fact, Westbrook even shows an image of the Halo Beauty Hair, Sin and Nails Booster bottle where it says the same.

As for questions about the FDA, that's an easy one. Westbrook explains that vitamins are not regulated by the FDA, and therefore, there's no way to get their stamp of approval.

One of the other big concerns had to do with an ingredient called saw palmetto. Many online commented on Instagram and Twitter that the ingredient allegedly decreased the efficacy of hormonal birth control. Considering that many interested in the vitamin would also probably be on oral contraceptives, this caused a huge issues in the comments section.

How did Westbrook explain this? Her exact words were, "Saw palmetto is not going to get you pregnant. It's not going to make your birth control not work." As an example, she uses nutraceutical brand Nutrafol which also contains the ingredient and is a major brand that Westbrook says she herself used to take.

Regarding saw palmetto, Bustle reached out to David Lortscher, board-certified dermatologist and CEO of Curology. Dr. Lortscher explained that saw palmetto is sold as a dietary supplement and is not regulated by the FDA. He goes on to mention the biggest point of contention Westbrook's subscribers had regarding the ingredient: How it could disrupt oral contraceptives. Dr. Lortscher says:

Because saw palmetto affects hormone levels, if you are using oral contraceptives, discuss the use of this herb with your prescribing physician before taking it. It should not be used in pregnant or nursing women. Long-term effects of using saw palmetto have not been thoroughly studied, and people are advised to exercise caution with its use. We have insufficient evidence to recommend saw palmetto for acne treatment. If you do wish to take saw palmetto, I advice you to discuss the risks and benefits with your primary care physician or other local healthcare provider.

Westbrook does admit that one critique bothers her the most, and that's the idea that she's simply selling biotin. Westbrook clearly stands by her formula and its quality, and told viewers in her Snapchat story that if they were to separate the ingredients out, the vitamin would retail for over $100.

Regarding the amount of biotin found in Halo Beauty, Dr. Lortscher says that high dosages are common in hair, skin, and nail vitamins. However, he does explain that even in small doses, he has seen biotin aggravate acne, and it's not something he recommends from those with the skin condition or with clogged pores.

As for Dr. Lortscher's overall thoughts on Halo Beauty's ingredients, he says there's always a reason to be cautious. He explains, "In general, be aware that there are concerns regarding safety when high doses of vitamins/supplements are consumed. Also, there may be negative interactions with prescribed medications, or other supplements. We advise a healthy balanced diet as the main source of the vitamins and minerals needed by your body—and your skin. I recommend that you discuss any herbs/supplements with your primary care physician or other local healthcare provider."

Westbrook finishes out the Snapchat by explaining that her explanations are not the end of the conversation, and she plans to do a much more in-depth video. However, before going, she does make sure to tell viewers, "I'm really happy that I did get the support that I did. This is still a very successful day so thank you guys, and to everyone else that has concerns, please consult with your physician. Take a pause. If this is not for you, that's totally okay, but please do not discredit me with misinformation. I am not putting anything out there that is harmful. I am not doing anything to put anyone at risk. Everything that needs to be said is said on the website or on the label."

To see the rest of what Westbrook has to say about Halo Beauty, check out the Snapchat which has been posted to YouTube, and if you want more, the guru has been very vocal and active on Twitter answering fan question. In the end, the decision to purchase Halo Beauty is up to you, but of course, it's always best to consult with a physician.