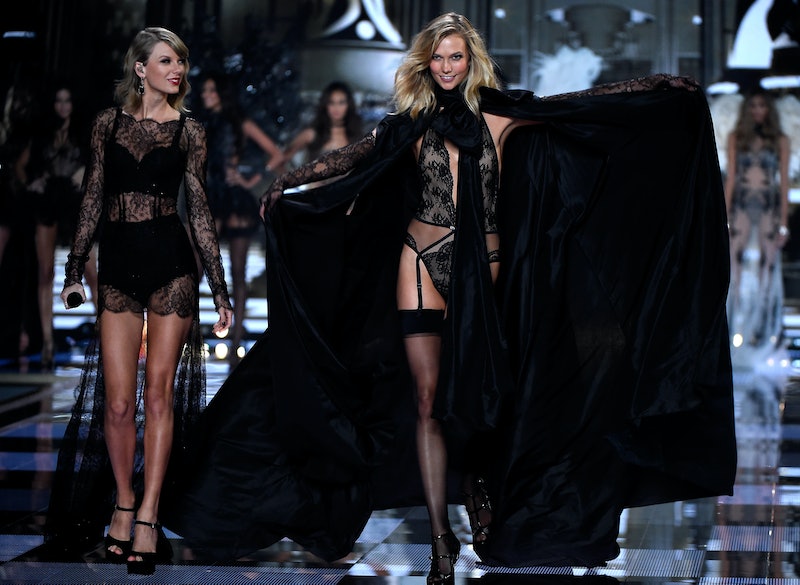 Everyone knows Taylor Swift and Karlie Kloss have been BFFs for years now. Come on, the two were such good friends at one point that they almost seemed like they were twins. Yet, after some recent drama surrounding a certain social media post, some have been left to wonder: Are Taylor Swift and Karlie Kloss still friends? Some of the singer's fans are questioning things after Kloss' "swishy" Instagram post.

The whole drama started when the model posted a video of her appearance in Love Magazine's advent calendar, which has featured other celebrities in somewhat provocative videos throughout the holiday season. In the clip, she donned her basketball gear and showed off her best b-ball moves. Nothing crazy. But, the reason why Swifties have taken issue with the video is because of Kloss' caption. She captioned the video, "Swish swish" along with a basketball and heart emoji.

Now, this was probably just to tie back to the fact that Kloss was playing basketball in the video. "Swish", of course, is the sound a basketball makes as it goes through the hoop. But many Swifties thought that it was a connection to Swift's... enemy Katy Perry and her single "Swish Swish".

Swift and Perry have famously been feuding for years. The Reputation singer claimed that a female singer (who people have assumed is Perry) "tried to sabotage an entire arena tour" and hired Swift's people from under her in a 2014 interview with Rolling Stone. While the two singers have basically been subtweeting each other about this drama for years, Perry finally confirmed the feud in a Carpool Karaoke appearance recently. On The Late Late Show with James Corden in 2017, she said, "Honestly, it’s really like, she started it, and it’s time for her to finish it". So, this feud's been going on for a long time now and it doesn't seem like there's an end in sight any time soon, unless Swift wants to "finish it".

This years-long feud is the main reason why Swifties were so quick to comment on Kloss' social media accounts about the "Swish swish" caption. To them, even this subtle tie-back to Perry was enough of a red flag for the Swift/Kloss friendship. Yet, the model most likely didn't mean anything by the caption, as the two are seemingly still friends. On Dec. 13, she wished the famous singer a happy birthday on Instagram. It's not like she'd do that if the two were feuding. There's also nothing else that would indicate that the two are no longer friends, like an unfollow or any kind of subtweet situation going on.

The pair's seemingly good friendship status didn't stop Swifties from going after Kloss for her caption choice. Here's what the fans had to say about the situation.

This user's confused Swift gif says it all about the whole situation.

This doctored image of Swift's Reputation album cover is side-eyeing the heck out of the caption (and probably haunting some dreams).

Another Swiftie knew things were going to be bad in the Taylor-verse and hilariously tweeted Kloss this gif in reply to the "swishiness".

One Swiftie can't figure out why Kloss would use "Swish swish" as her caption for the video, and neither can Swift herself here.

One fan declared this the end of "Kaylor", the pair's friendship name. But... also said that it wasn't a thing in the first place.

This Swiftie had an "award" for Kloss. She's probably not going to be too happy with it though.

Another fan used that classic, dreadful line that they're not mad, they're just disappointed. And everyone knows that's basically worse.

One Swiftie used the cutest little gif to show just how confused they were by Kloss' choice of caption.

A lot of Swift's fans were probably just asking why that specific caption at all, even if nothing was meant by it.

One Swiftie used a hilarious term for the whole situation. They called what Kloss did "sister treason". Given the the pair's similarities, the term is kind of on point.

Swift's fans will always come out in full force to defend her. But, this is probably just a case of a total misunderstanding/overreaction. "Kaylor" is supposedly still alive and well. And since that's the case, Swift herself will probably (hopefully) just laugh off this whole "Swish swish" business.