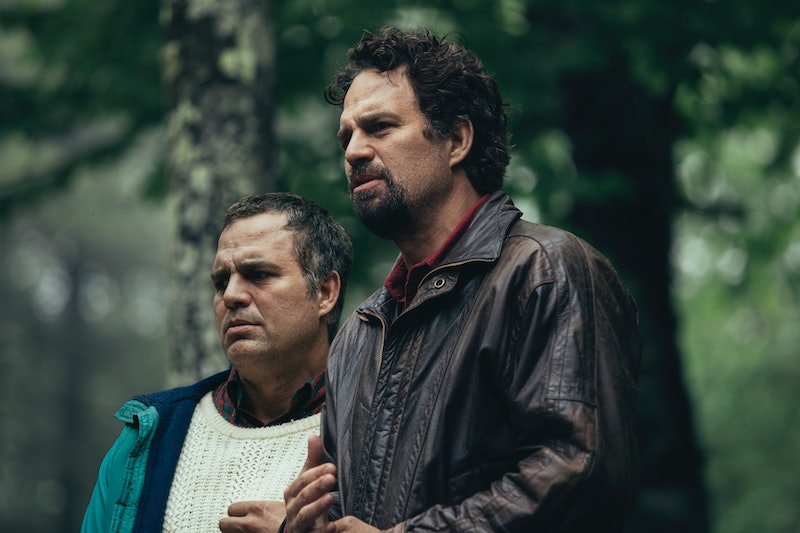 Versatile actor Mark Ruffalo does double duty in HBO's new limited series I Know This Much Is True (out now). Ruffalo stars in the six-part drama as twin brothers Dominick and Thomas Birdsey. Thomas suffers from paranoid schizophrenia and Dominick tries to protect his brother from his own harmful delusions while also unraveling their family's secrets. With Ruffalo taking on two incredibly different and difficult roles, audiences might wonder if the Birdsey brothers from I Know This Much Is True are based on real people?

Despite its name, I Know This Much Is True isn't a true story. The series is an adaptation of the 900-page novel of the same name by Wally Lamb. The book was released in 1998 and was a part of Oprah's famed book club. The story stretches over multiple decades and features an ensemble of seriously talented actors such as Melissa Leo, Rosie O'Donnell, Archie Panjabi, Juliette Lewis, Kathryn Hahn, and Imogen Poots. Directed by Derek Cianfrance, who also made the melancholy Blue Valentine, I Know This Much Is True looks powerful, sad, and moving.

The Birdsey brothers aren't based on anyone in particular, nor is Lamb's book based on any real family or true story. But Lamb was inspired to write I Know This Much Is True after hearing another story. As he told the Poetry and Literature Center at the Library of Congress, I Know This Much Is True is based on, "an eerie Hindu myth I read in anthropologist Heinrich Zimmer’s The King and the Corpse. It's the tale of an ineffectual ruler who learns the value of humility and responsibility by solving the riddles put before him by a sarcastic talking cadaver."

In the novel, Dominick must learn how to forgive multiple betrayals while also forgiving himself for not being everything his brother can rely on. Dominick's character development, Lamb told the Library of Congress, is about growth. "I hope never to pen a protagonist so static and stunted that he or she simply repeats old patterns without having learned from the conflicts that have been negotiated. I would never ask readers to waste their time on so clueless a character, so pointless a plot."

On taking on the dual role, Ruffalo told The New York Times, "I've always been a little crazy, you know? I've always bit off more than I can chew, as a form of self-destruction. But some part of me also is willing to meet the challenge as best as I can. We really wanted to create two separate people that were so distinctly different from each other, even though they were identical."

Ruffalo shot all of Dominick's scenes first then took six weeks off to gain weight to more believably play Thomas. The process not only sounds incredibly difficult, but one that Ruffalo is immensely proud of. "In one sense it's been the most amazing thing I’ve ever done. But it's 600 pages of dialogue. I was on every page. I mean, I can retire now. My feeling of, Did I push myself? Did I leave it all there? I’ve never felt that. I’ve always held back something. With this thing, I made a decision: I’m 52 years old; I’m not going to leave anything behind."